I hardly know where to begin. Or end. I think this is the first time I've found myself starting a write-up in this precise set of circumstances.

If you're a committed classical concertgoer (and I like to consider myself one of those), it's possible to hear certain orchestral works performed reasonably regularly, or see repeat productions of an opera. But in my experience, it's quite difficult to hear the same song recital in the same city more than once. (Many of the same songs scattered, of course, among different programmes and different performers - but that's not the same.) You can spend a rapturous, fleeting hour and a half and then it's gone - if you're lucky, the radio mics are in there, or the artists record a CD of the repertoire. They may take the programme to other venues, other countries but you're extremely fortunate if they come right back and do the whole thing for you again.

But! This has just happened. (With a few tweaks.) During the 2016 Proms, one of the absolute highlights of the season was seeing Carolyn Sampson and Iestyn Davies, accompanied by Joseph Middleton, play one of the Chamber Prom series at Cadogan Hall. 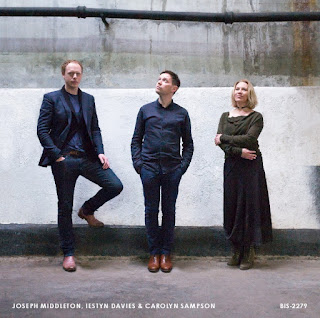 I was excited about the Prom gig because I was already a fan of all three performers. CS and JM had released a debut duo album that I still think is one of *the* great recital CDs, 2015's 'Fleurs', and I'd already seen CS and ID work together in a marvellous performance of Handel's 'Orlando'. Put them on stage together as a team - what could possibly go wrong? Well, nothing, of course. The whole thing was a joy from start to finish.

The programme was a sequence of brilliantly-chosen, finely-balanced duets - with the odd solo number for each singer woven in. There were four sets of songs, grouped by composer, as follows: Purcell (in the 'realisations' created by Benjamin Britten), Mendelssohn, Schumann and Quilter. The broad theme throughout was the destabilising - for good or ill - effects of love, and the whole set has a pleasing symmetry to it, with Britten and Quilter, both looking back to some extent from the 20th century (one for music, the other for words), cradling their two German predecessors.

Quite a lot has happened since then. If - and I realise it's an 'if' - these two singers have been most readily associated with Renaissance/Baroque repertoire, then more recent work sees them casting the net much more widely. For example, CS and JM have continued building up a handsome body of work in art song, following 'Fleurs' with 'A Verlaine Songbook' and now the new record 'A Soprano's Schubertiade'. CS was also an unforgettably affecting Mélisande in Debussy's masterpiece for Scottish Opera. I also saw ID in two searing modern works at the Royal Opera House: Benjamin's 'Written on Skin' and Adès's 'The Exterminating Angel' - his edgy, unpredictable presence doing a great deal to cement the countertenor voice as an utterly contemporary weapon in audiences' minds and ears.

And somewhere in the middle of all that, they recorded and released the Britten / Mendelssohn / Schumann / Quilter set as the CD 'Lost is my Quiet'. As you can imagine, this has been played more or less to the 'melted by laser' point in Specs Towers, the memory of the concert that started it all as present as the sound coming through the speakers. If we were still in vinyl-only days, I think I'd be on my third copy at least. 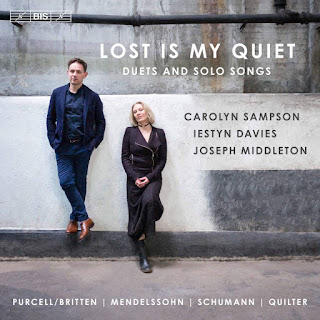 Now, at Wigmore Hall, we get 'the concert of the album' (very similar, though not identical, to the Prom version) and those of us who were there the first time have the rare opportunity to come full circle. If anything, the performance this time had even more power and panache.

Both singers have a stunning clarity and purity of tone - so while CS's soprano and ID's countertenor remain perfectly distinct, they don't so much blend as 'mesh'. You can always hear both - there's no 'blur' - but they sound inseparable. So in sync are they with the material and each other, that you could be forgiven for assuming that one mind is telepathically controlling the two voices. This particularly comes across in, say, Mendelssohn's 'Ich wollt', meine Lieb' ergösse sich', or Schumann's haunting 'Herbstlied'.

As actor-singers, they generate a pleasurable tension between their 'angelic' registers and the physical expression of the more earthly, sensual subject matter of the songs. CS gives us wide-eyed wonder, tenderness and terror; ID an occasionally wracked, noble presence, at times leaning to the piano as if for support, then unfolding, straightening, to face the listeners, gesturing towards us, recharged. Mendelssohn perhaps provides two of the most striking solo moments, with ID's stately, searching 'Scheidend' contrasted immediately by CS's hyperactive, agile 'Neue Liebe'. The stage is not large, but the eye contact, easy body language and frequent smiles between them speak volumes and communicate their enjoyment of the songs directly to us.

The intimacy of the Wigmore itself - which I really felt, after seeing both CS and ID at 'opera house distance' recently - amplified the whole experience, sound and vision. The superb acoustic also allowed us to fully appreciate how versatile and sympathetic an accompanist JM is - always keeping an ideal balance with the voices whether flying round the keys at breakneck speed (the aforementioned 'Neue Liebe', or Schumann's 'Aufträge') or anchoring some of the steadier tunes with sonorous, rich tones, especially in the bass: with JM a Britten specialist, this comes over strongly in the beautiful Purcell realisations.

I've no idea if I'll ever get the chance to see and hear the 'Lost is my Quiet' programme for a third time! But there is always the disc to return to - if you don't already have a copy, buy with confidence. And for that matter, haste!
Posted by Adrian at 16:54