Here is the link for booking tickets - and here's why you should go...

Last night, I was at the opening performance of the new English National Opera (ENO) production of Handel's 'Acis and Galatea' - not in their usual home, London Coliseum, but in their rehearsal studios in West Hampstead, Lilian Baylis House. 'A&G' is the first of two operas being performed this year 'between seasons' under the ENO Studio Live banner - the other is Britten's 'Paul Bunyan', playing at Wilton's Music Hall in early September.

ENO Studio Live was launched last year, and the kind souls among you who read this blog regularly may remember my raving about it at the time. The initiative takes the music staff and ensemble out of the Coliseum, and lets them loose on smaller-scale works that give free rein to their imagination, dedication and talent. Let's say your favourite band (and ENO's Chorus & Orchestra are certainly one of mine) are at the level where they only play arenas - and then you suddenly get the chance to see them in a tiny venue or club. That's what ENO Studio Live is like. That's why it's so exciting.

Both of 2017's productions were in Lilian Baylis House: Dove's haunting 'The Day After', sharply contrasted by a riotous staging of Gilbert & Sullivan's 'Trial by Jury'. There was something off-the-leash, almost guerrilla-like about the inventiveness, zeal and commitment of those performances - a real 'this-is-what-we-can-do' statement of intent. Could they repeat that intensity in 2018?

Spoiler alert: Yes. Of course they can. For 'A&G', the experience is even more full-on as the seating is almost - but not quite - in the round: two rows at each side of the stage area with the action taking place on the floor space in between. On arrival, it's already possible to risk sensory overload... 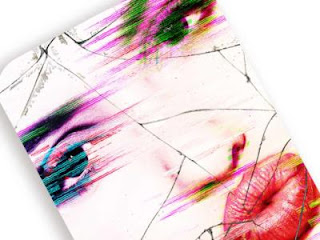 To take a brief step back, into the story: Handel's 'A&G' is a pastoral opera drawn from a tale in Ovid's 'Metamorphoses', featuring a group of nymphs and shepherds enjoying - at first - a peaceful, idyllic existence. The nymph Galatea is loved by both Acis, a shepherd, and Polyphemus, a cyclops or giant. (You might also remember Polyphemus from Homer's 'Odyssey', in classical literature's most famous 'You could take someone's eye out with that' moment.)

Galatea returns Acis's affections and, horrified by Polyphemus's attentions, rejects him outright. Despite the efforts of Acis's friend Damon to calm the situation, the giant snaps when he sees the couple together and murders Acis. Her love undimmed, Galatea transforms Acis into a fountain in a semblance of immortality.

Director Sarah Tipple has staged this version in the present day. Instead of an idealised country paradise, we're at a summer bash held by 'MountainMedia', some kind of PR/marketing concern where everyone is 'across' Instagram, Facebook and Twitter 24/7, wielding phones like extensions of their actual hands, and demolishing the bottomless free bar. The nymphs and shepherds are now boisterous, excitable colleagues on the razzle. Taking my seat, my first thought was: 'This might divide people': everything is vivid, drenched in colour - the electronic screens, the balloons, the bright reds, yellows and greens of the bean bags. The thing is - from the first note, everything starts to work, the effect as 'instant' as the social media being relentlessly sent up.

While giving away the plot is not necessarily an issue with opera - I've already summarised this one here, and it's quite common to read a synopsis before a performance - I do want to talk about some aspects of the production that I found clever and interesting. So, if you're thinking of going and want some surprises, please stop reading here, with my blessing, and come back afterwards!

One gripping feature of the production was that the narrative was kept constantly moving, even though this type of opera - where the aria passages create a kind of stasis with repeated lines and phrases, while the recitative drives the plot - can resist that. The four soloists used much of this time to round their characters out beautifully, and find a complexity to undercut any temptation to see anyone as a straightforwardly black/white, good/evil persona. All are worthy of mention. Matthew Durkan's Polyphemus doesn't turn up halfway through, solely to be mocked: his awkward, clumsy misfit is onstage more or less throughout, silently, visibly wracked by his unrequited passion until he moves centre stage later on. Lucy Hall makes a playful, warm Galatea whose fateful moment of teasing, misjudged interaction with Polyphemus ignites his false hope. Alexander Sprague's Acis is hyperactive, cocky, unpredictable - nailing a character who could clearly be endearing one minute, annoying the next. And in an extraordinarily sensitive performance, Bradley Smith works wonders with Damon, hiding his own secret longing and layering everyone else's pain on top of his own. It feels almost superfluous to point out how beautifully they all sang; as it should be, their voices were completely at one with their acting, and the power and volume - when grief and rage finally take over - was devastating. 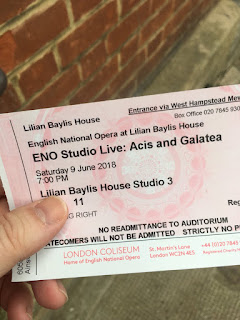 I can't overstate how crucial the intimacy between performers and audience is to ENO Studio Live. For most operagoers, to see an onstage facial expression properly is rare - at least, until a DVD comes out, or you attend a cinema relay. But the sonic difference is also key. An environment like this really brings home what matchless communicators we have in the great troupe of actor-singers in ENO's mighty Chorus. In the Coliseum, you can still perceive them all as carefully-realised individuals, making up that unstoppable wall of vocal sound. But here, with all them acting up a storm, every MountainMedia employee is enjoying their own evening, having a whale of a time. As they work the stage area, interacting with each other during the chorus sections, you can discern their separate voices depending on who is nearer to you, or further away - so the balance shifts and the blend changes, while the combined 'whole' remains glorious. I love the idea that the half of the audience on the other side will have heard a distinctly different 'mix' to me. You really are 'in it' that much.

While the staging is inevitably a little surreal (after all, the libretto is still talking about shepherds and monsters), it's completely true to itself. While its most prominent themes - love, lust, jealousy, hurt - are truly ageless and universal, it makes other superbly-realised observations along the way. The gathering's selfies, hashtags and Instagram posts - which ping up onto screens for us all to see once they're captured - start out as fun-fuelled larks. But, just like in the virtual world we're now all too familiar with, we see social media's dark side as a platform to enable insincerity, humiliation, public shaming and, ultimately, even maudlin sentimentality and empty triviality (how Galatea chooses to 'immortalise' Acis in this interpretation is genuinely chilling).

I was also intrigued by the production's commentary on alcohol. Drink is almost the fifth main character. Everyone helps themselves constantly to the bottles of booze in the cooler at the back of the stage (I assume this is just water or pop in real life, otherwise most of the cast are probably still trying to find their way home now). As a result, what starts with letting one's hair down and - in poor old Polyphemus's case - building up some Dutch courage, soon turns nasty and harmful. Brilliantly - for the audience, at least! - the players are of course getting hotter as the action goes on, and we're close enough to see this. This, with the physicality of their performances, makes the air of drunken unpredictability all the more real and tense, even though we already know it won't end well.

At an opening night, you get to applaud the 'behind the scenes' folk too, so I was glad to be there to do that. The movement director for this production is Gemma Payne, who I think deserves a huge amount of credit for choreographing such a visceral piece - whether it's the Chorus's good-natured mayhem early on, to the sudden, desperate, heart-wrenching violence - and its aftermath - towards the end.

Last, but of course not least, the splinter group from ENO's Orchestra, led from the harpsichord by Nicholas Ansdell-Evans, did a fantastic job of playing the score with real delicacy and precision - untouched by the radical treatment of its subject matter a few feet away. If anything, it proves that the music itself is as timeless as the themes. Nothing jarred, every emotion had its moment of expression: the score and the story were held in suspended animation, and so were we.