Throughout Offenbach's 'Les Contes d'Hoffmann' ('The Tales of Hoffmann') at the Royal Opera House, the word 'luxury' kept popping into my head: luxurious sets, a luxurious running time, certainly a luxury cast - plus a score and libretto to luxuriate in, full of ideas and inventiveness.

A 'quick' run-down of the plot, then. Hoffmann is a poet, succumbing to alcoholism. (And he was, in fact, a real person: E.T.A. Hoffmann, on whose stories the opera is loosely based.) His Muse takes the guise of Hoffmann's loyal companion, Nicklausse, and plans to have Hoffmann commit himself once and for all to words alone. In theory, this shouldn't be too difficult, because Hoffmann has had possibly the most disastrous love life of any chap, real or fictional, in recorded history. The opening prologue - set in Hoffmann's and his drinking pals' pub of choice - sets us up for his latest potential failure.

We learn that Hoffmann - yet to show up at the inn - is due to meet the diva Stella after she finishes that evening's performance. However, a sinister councillor called Lindorf arrives first, scheming to intercept the assignation and steal Stella away from under Hoffmann's nose. When Hoffmann finally arrives, already somewhat 'lit up', he recognises Lindorf as someone who keeps turning up when things are about to go badly wrong. This jolt leads him to recount the sad stories of the previous three loves of his life. 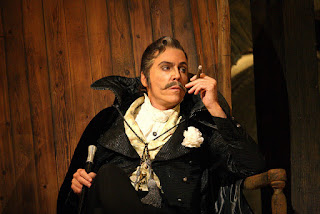 And so the opera 'proper' plays out in flashback. Acts 1, 2 and 3 are, in effect, a kind of 'Trittico': they are almost stand-alone as short works in themselves, and each has its own distinct style/genre. Over the years, directors have changed the running order, depending on what they feel works best - it has no real impact on the overarching story. However, the links between the three Tales are what gives the whole its cumulative power. Hoffmann as doomed lover, along with the faithful Nicklausse, are the two recurring characters - although not necessarily the only familiar faces....

In the ROH production, we first get the 'Olympia' act, which is a farce of sorts. Hoffmann is smitten with the 'daughter' of Spalanzani, a scientist with a special interest in automatons. Olympia is to 'come out' at a huge party thrown by her dad. Nicklausse knows that the debutante is in fact a robot, but his warnings to Hoffmann fall on deaf ears. The doll is so convincing that Hoffmann believes she returns his affections. Sadly, Coppélius - a fellow scientist who gave Olympia her deceptively lifelike eyes - is conned out of payment by Spalanzani, and bursts back on the scene to tear the automaton apart. Hoffmann only then realises he was in love with a machine. 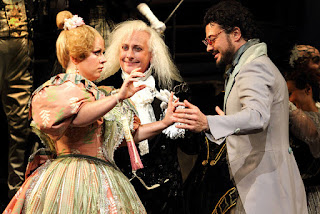 The 'Giulietta' act, set in Venice, is more along the lines of decadent horror. Under the influence of the sinister collector of souls Dapertutto, the courtesan Giulietta agrees to bring him Hoffmann's reflection. Schlemil, a former lover of Giulietta who surrendered his shadow to her, challenges Hoffmann to a duel, but the poet kills him. Nicklausse starts to engineer an escape from the city, but not before Giulietta secures Hoffmann's reflection and abandons him to glide away on a gondola with the magician.

Finally. we have heartbreak and tragedy in the 'Antonia' Tale. Antonia suffers from a mystery illness and her dad, Crespel, is vexed on two fronts: the over-attentive (and rather non-medically named) Dr Miracle, who was also in attendance at the early death of Antonia's mother and may do Antonia more harm than good... and secondly, Hoffmann, who loves to encourage Antonia to sing, which leaves her exhausted.

Crespel takes Antonia away, but Hoffmann and Miracle both track them down. Hoffmann, arriving first, learns about Antonia's condition - so suggests they marry but that Antonia should give up singing completely. However, he then leaves: Miracle enters, conjures up the dead mother's spirit, persuades Antonia to sing her heart out .... and so she dies, leaving Crespel bereft and Hoffmann alone for the third time.

We return to the inn for an epilogue. Lindorf, with an absolute minimum of fuss, distracts and escorts away Stella with ease. However, Nicklausse transforms himself back into the Muse, and persuades Hoffmann that he will channel his anguish into great works.

While it's possible to cast certain groups of roles across the three main acts to single singers (conventions seem to vary), for one it is vital: the bass-baritone who sings Lindorf also re-appears as Coppélius, Dapertutto and Miracle, so that Hoffmann recognises the same embodiment of villainy, taking his loved ones away from him each time.

Phew! Three operas in one. And I must admit, I really responded to this version in this order: the first story - despite Hoffmann's inevitable romantic disappointment - is laugh-out-loud funny in parts; and then the mood progressively darkens: while Hoffmann has sincere feelings for Giulietta, we already know that she is compromised and the ghoulish nature of the villainy still keeps the romance at something of a distance. Not so in the 'Antonia' sequence - the lovers are clearly in sync here, and their helplessness in the face of the fate we know they can't avoid is truly agonising (despite the bizarre comic interlude courtesy of deaf servant Frantz, which possibly adds to the tension by delaying proceedings). Offenbach's masterful score is our relentless guide through these mood changes - the jovial musical gags of the prologue (Hoffmann's party piece about the dwarf Kleinzach) and first act (Olympia's Doll Song, where she slows down several times and has to be 'wound up' again to keep going) little preparing us for the oncoming storms. 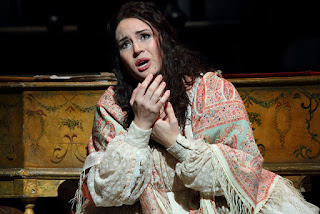 As befits an opera that makes a working assembly from a huge number of moving parts, the superb cast sang and acted with such an ensemble spirit that it's very difficult to single out favourites. I was very intrigued to see how Vittorio Grigolo would tackle Hoffmann, after experiencing his exuberance in 'L'elisir d'amore', followed by an admirably restrained turn in 'Werther'. Here he combines the two personas, with his youthful naivety in the Olympia act - playing the moment where Hoffmann reads undying affection in the robot's non-committal 'Oui' for maximum comic effect - giving way to the wracked torment of the later sections. Thomas Hampson - master of disguise - was in intimidating voice as Lindorf and co, making each incarnation vocally distinct: Lindorf's cool reserve contrasted with the inventor's blustering rage, sorcerer's aloof power and doctor's Satanic persistence: I had to listen, as well as look, twice to assure myself it was the same man: brilliant.

The lovers each have an act's worth of opportunity to make an impression - and they all seized it. Sofia Fomina was a startling Olympia, singing beautifully but, of course, with a necessary air of even rigidity, giving the automaton just enough 'life' to see how Hoffmann might've been fooled. Her movement was genuinely jaw-dropping: not just the obvious comic highpoints where she runs out of steam and needs 're-booting', but when she was fully up and running. The regularity of her gestures - in particular some business with a fan that she brought across herself in exactly the same way, to exactly the same notes - was sublime. Christine Rice as Giulietta had perhaps the hardest job to do dramatically, as someone already held sway by the evil magician, but gave an alluring, enigmatic performance that still managed to shock with her betrayal. Sonya Yoncheva was utterly heart-rending - a perfectly-judged characterisation that gave Antonia's voice beauty and fragility, fatal when its latent power is unleashed. I remember wondering at SY's versatility, having seen her only weeks before debuting a commanding and resolute Norma, also here at the ROH. 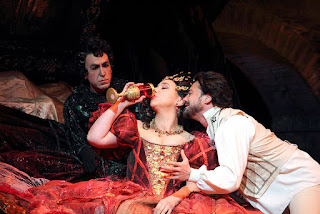 But I actually think, if pressed, I would give my laurel to the Muse herself, Kate Lindsey. Carrying off the 'trouser' role of Nicklausse with convincingly masculine gung-ho is only part of the story: the layering of his character gives the opera some of its finest moments. Nicklausse is generally the thinker of the pair, and one suspects Hoffmann could barely cross the road unaided without him: KL does a superb job of steering clear of any over-zealous thigh-slapping and grounds the boy with the stability the role needs. This is brought to fruition when his/her transformation back into the Muse - a real visual coup - is surprising and stunning, yet the stateliness has not come from nowhere. (For all that, KL delights the audience with Nicklausss's impersonation of Olympia - on the night I went, there was spontaneous applause, richly deserved.)

There's much food for thought in the production, too - originally by the late John Schlesinger (best known for directing films like 'Darling', 'Midnight Cowboy' and 'Marathon Man'). Two staircases dominate the stage, as we first see the two-level tavern, with a cubby-hole to the left - Lindorf settles himself into this snug as the Tales begin. Each subsequent act, however, conforms to this pattern, even though the action takes place all over the shop. Spalanzani's great house has its guests swarm around the stairs to gawp at Olympia; the upper level becomes a Venetian bridge with steps down to the courtyard for the second act; while we are back inside for Crespel's house in Antonia's story. In each act, the evil seems focused around stage left (sinister?), in particular the seductress's bed and - quite literally - the hellish furnace which appears to be home to Dr Miracle.

In the same way that the three stories combine to form the whole, we're explicitly told (by Nicklausse) that the three lovers are all aspects of Stella: youthful beauty, sex appeal and musical talent. I don't think this quite moves the opera into 'It's all in his head' territory - Hoffmann is genuinely battered and aggrieved by his experiences - but the consistent shape of the staging reminds us that we never actually leave the inn: these are stories being spun, and Lindorf's malevolent presence is always there, listening on the left, and the Tales are being overlaid, like tracing paper, onto the same template below.

Given that the resolution is Hoffmann finally deciding not to fight against his Muse, it is tempting to see Lindorf as the personification of Hoffmann's own demons. I found it interesting that Hoffmann is in fact responsible for his own misfortune throughout: he refuses to see the truth staring him in the face in 'Olympia' (if the doll wasn't destroyed then, he would've found out in unthinkably embarrassing ways later on); he kills his rival in the duel in Venice without any actual interference from Dapertutto; and he puts Antonia in a state of emotional confusion after encouraging her to sing, then insisting she doesn't - again, if you remove Miracle from the story, it is still likely that Antonia would've sung again and died from exhaustion. Hoffmann seems to have conjured up Lindorf as a kind of symbol or catalyst who represents, but doesn't cause, the trauma. When he decides his Muse is the true love of his life - a happy ending, so to speak - he is as dismissive of Stella as he is of Lindorf, and the two simply leave without ceremony.

Different possibilities for interpretation aside, the production is full of incidental pleasures to thrill and amuse. I particularly enjoyed the notion that all of Spalanzani's servants are prototype automatons, none of whom functions quite as well as Olympia; the simple sleight-of-hand involved with showing Hoffmann a mirror without his reflection; and the manner of Antonia's mother 'coming to life'. This kind of loving attention to detail, alongside the total commitment of the singers and players, gave the impression of an entire company as devoted to the Muse as Hoffmann himself.