Hello again. I hadn't meant to let quite this long go by without a blog post, but there it is. Life got in the way. Some bits of rubbishy, stressful stuff that I shouldn't in all honesty complain about - and also, on the plus side, a flurry of musical outings at a seemingly relentless pace - with no room in between to actually write about any of them!

So, now the work starts to try and rectify this to some extent - and it seems fitting to turn first to a company I never tire of writing about: English National Opera (ENO). With the new season now up and running, I have three of their recent productions still fresh in my memory: 'Don Giovanni', 'Tosca' and 'The Pearl Fishers'.

The new production of 'Don Giovanni', directed by Richard Jones, was electrifying. Bled of his hallmark bright colours, this time the doors, streets and windows were grey and grimy, as we moved from interiors to exteriors guided only by streetlamps and shadows. With great comic reversal, the conventions of a humorous genre - bedroom farce - were satirised to expose Giovanni's actions as truly despicable. To the overture, we saw a parade of women entranced, then escorted behind a closed door, by our anti-hero: richly funny at first, then relentless, emotionless as the conquest count increased. 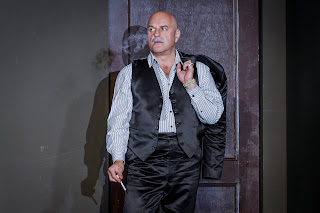 Christopher Purves gave a totally commanding performance as DG - bullish charisma and utter confidence making his domination of his victims totally believable. He and Clive Bayley as servant Leporello made an excellent double act: in full-strength nerd costume (dark specs, unnaturally loud wig), the lackey seems to symbolise the asexual, admin-focused balance to DG's all-instinct, lust-driven existence. In the production's most jaw-dropping visual gag - so audacious it counts as a fully-fledged twist - we're given cause to wonder about the pair's relationship and who might be indispensable to who.

I daren't give away that particular coup away, in case the production is revived (it certainly should be). But there's plenty of other stuff to rave about. This version of the story is not afraid to go beyond 'sexy' into 'sordid' - from the opening seduction, we're in a world of prostitution, dark fantasy, safe words and submission. And it completely follows through: DG's pursuit of Zerlina (Mary Bevan, brilliantly bewitched and bewildered) on her wedding day takes place against a grubby, shambolic excuse for a party... where the (as ever) brilliant chorus perform masked dances, trapped in their own hidden identities, quite alone, tripping.

The whole cast offered complex, rich characterisations that - contradictory as it sounds - made them all stand out. Caitlin Lynch was a powerful Donna Anna, clearly headed for marital tedium with Don Ottavio - a superb incarnation by Allan Clayton, who sounded and acted utterly impassioned but never quite high-octane enough to satisfy his thrill-seeking fiancée. By contrast, Christine Rice as the unravelling Donna Elvira underpinned the piece with the necessary emotion, the anguished outcome of DG's wanton excesses. A special mention too for Danielle Meehan in a silent acting role, succumbing to the Don's charms by phone in another of the staging's queasily comic visual triumphs.

(And no surprise whatsoever that the orchestra packed a punch, with Mark Wigglesworth - their former music director - at the helm.)

'Tosca' offered a different kind of pleasure. In some ways, going to see 'Tosca' (or popping in a DVD of same) is a bit like going to see your favourite band: familiar enough to me now that I anticipate the twists and turns and recognise every vocal nook and cranny. But a little bit different each time, too - still capable of surprises, still giving you exactly what you want. From my perspective, I want a thrill-ride - to feel the net closing in on the protagonists from the opening note - and to experience that welcome shiver down my spine at the close of Act 1, when Scarpia outlines his dastardly plans in blasphemous harmony with the glorious 'Te Deum' (which - again courtesy of the mighty ENO chorus - I got).

ENO's staging is not edgy - literally - as all three scenes (church, interior office, roof) make use of a curved floor sloping towards backstage. (Mind you, do any of you know about any truly 'regie' - that is, ultra-modern or conceptual productions of 'Tosca'? I can't think of any. Has the diva ever thrown herself from an office block, or out of a spaceship airlock? I'd love to know.) This particular idea worked for me because it's almost like looking at the doomed trio through the wrong end of a telescope: again, the eye of fate, events beyond their control encircling them all.

I enjoyed all the singers (Keri Alkerna was Tosca, Gwyn Hughes Jones sang Cavaradossi), but here I do want to single someone out: the excellent baritone Craig Colclough as Scarpia. CC has appeared at ENO three times now (to my knowledge) and been brilliant in every performance. His interpretation of Jack Rance was one of the crowning glories of 2014's 'Girl of the Golden West', and he made a huge impression on me as Kurwenal in the recent 'Tristan and Isolde'. With Scarpia, you might think that somehow the expectations of the role are a little more defined, even restrictive - but this was no pantomime villain. Instead, he began the opera as a schemer... a planner: plausible, even charming, delivering the role with variation and sensitivity, an element of thinking aloud. Then, the dark side has room to emerge more fully as the sadism and lust overtake him. An absolute standout. 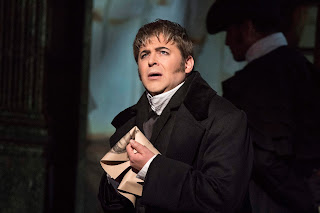 Finally, 'The Pearl Fishers'. I was completely unfamiliar with this Bizet opera and I must admit, I was slightly nonplussed by the work itself - a sort of pocket-sized drama where the town chieftain and returning nomad thrash out their love for the same woman, primarily through colossal moodswings, mind changes and plot contrivances. But while it might not have set my brain whirring the way some operas do, it was an evening - especially in the shape of this ENO production - to gladden the eyes and the ear.

The opening scene is simply jaw-dropping, as the pearl fishers appear to swim 'underwater' / in mid-air, before our eyes. And the splendour keeps coming: the entire town seems compressed onto the stage, pathway upon pathway, with a gently undulating fabric channel flowing through it. Later, we see further dives as somehow the actor-dancers manage to slide from their boat and into the waves. When it's quite common to see relatively austere and stylised productions these days, there is something rather nourishing about a staging so unashamedly opulent: I admire the decision to put the whole community, coast and - hell, why not! - the ocean as well, up there for us to see.

All four main soloists seized their roles with relish: James Cresswell as implacable high priest Nourabad sang with a voice of immovable rock. Robert McPherson as the lovestruck Nadir filled his keening tenor with both indecision and rapture. And Claudia Boyle convinced as priestess Leila, in what seems a near-madcap transition from demure chastity to coquettish ardour, then to vengeful anger. For me, the most impressive was the remarkable baritone Jacques Imbrailo - such powerful depth to the sound, grounding the headman Zurga with authority - but able to 'break free' into unhinged-tenor style anguish and melodrama as the occasion demanded. 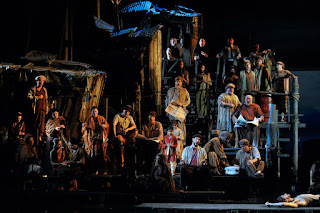 Most pleasing of all: here we got to see the chorus doing what they do, brilliantly. I've written several times on here about ENO's behind-the-scenes woes, and the awful way this has impacted their invaluable singers and musicians. This season overall clearly sidelines the chorus, and I can't emphasise enough that any opportunity you have to hear this marvellous group of singers - you should take it. Always reliably good actors, too, they blend in or stand out as required with a keen sense of collaborative timing and mutual support, while sounding anything but 'background'.

Hopefully, the new blood at ENO - artistic director Daniel Kramer and music director Martyn Brabbins - will see this as an unfortunate blip rather than a potential trend, and ensure that future seasons make the most of this indispensable troupe. Along with the orchestra, they are the glue that binds the place together, and give ENO productions a unity - an identifiably warm and versatile sound combined with a game, questing sense of drama and spirit - the company should build on.

(All the photos are from the production galleries on ENO's website: Christopher Purves as Don Giovanni by Robert Workman; Craig Colclough as Scarpia by Richard Hubert Smith; the splendid ENO chorus in 'The Pearl Fishers' by Robbie Jack.)