In my previous post, I wrote fondly about the range and scale of the Proms - which to many people, for better or worse, is summed up by the epic extravaganza of the Last Night and the vast rotunda of the Royal Albert Hall.

The venue that thinks it's a steamer hosted 74 of the concerts this year. Even though we managed to take our holiday right in the middle of the season, I still made it to some fine performances.

There was a sublime evening of Mozart and Mendelssohn, courtesy of soprano Rosa Feola and Le Cercle de l'Harmonie. The BBC Philharmonic under Juanjo Mena presented a thrilling programme of Ginastera's 'Ollantay', Steven Osborne having a high old time with Britten's Piano Concerto, then rounding off the evening with Schubert's 9th. More Mozart - the Mass in C Minor - with four superb soloists (Louise Alder, Carolyn Sampson, Benjamin Hulett and Matthew Rose) supported by the BBC Symphony Chorus and BBC Scottish Symphony Orchestra, conducted by Ivan Volkov. Finally, I felt very lucky to have seen the City of Birmingham Symphony Orchestra's Prom, under the thrillingly dynamic leadership of their new music director Mirga Gražinytė-Tyla: an unstoppable whirlwind on the podium (mostly conducting without score), we heard the Magic Flute overture and Tchaikovsky's 4th Symphony - plus US soprano Barbara Hannigan singing the London premiere of Abrahamsen's 'let me tell you' song cycle. It was fascinating to see BH - renowned herself as a 'force-of-nature' performer - assume the role of the 'still presence' on stage a few feet away from MGT's constantly-alert, detail-seeking energy.

But what I really want to do here is turn the focus away from the Royal Albert Hall for a while. After all, this year also witnessed Proms in the Sam Wanamaker Playhouse in Shakespeare's Globe, the Roundhouse in Camden, the Old Royal Naval College in Greenwich - and a multi-storey car park! As someone who (as regular readers will know) attends a lot of smaller-scale concerts - especially classical art song - I always pay particularly close attention to the Chamber series, which take place on Monday lunchtimes at Cadogan Hall, just off Sloane Square. (I've been advised that the BBC are 'unlikely' to adopt my genius marketing idea of calling this series the 'Tiddley-Proms'. You can't help some people, etc.) 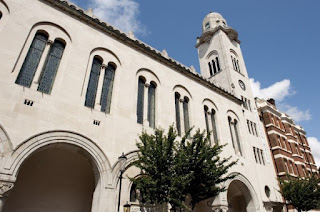 And sure enough, this year the final chamber concert of the season was my undoubted Proms highlight of 2016. For a start, it featured three favourites of mine: soprano Carolyn Sampson (again!) and countertenor Iestyn Davies, with Joseph Middleton on piano. There were three strands to the programme: songs by Purcell/Britten (Britten, a huge admirer of Purcell, 'reconstructed' a large number of songs for which the earlier composer had left only sketches - so they sound suspended between centuries), Mendelssohn and Quilter.

While love - and the bliss or angst it can bring - bound many of these selections together thematically, the programme also had a quality of 'unearthing' about it. Just as Britten excavated the Purcell works, in the bright afternoon of the Cadogan auditorium, it also felt as though the concert was also bringing to light two other song composers who may not have had their full due. Petroc Trelawny, presenting for BBC Radio 3 from the stage, drily remarked that Mendelssohn may be the only composer whose 'Songs without Words' were more famous than those with them. 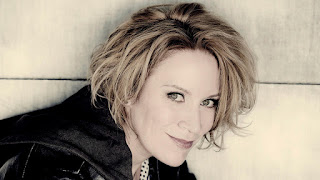 I was on a high after this gig for days. It seemed a perfect hour of music-making. The songs were chosen were, without exception, not just beautiful but interesting - whether Mendelssohn's mastery of a last-minute mood change (putting on the brakes near the end of 'Neue Liebe') or Quilter's light-operatic nod towards something resembling a show-tune ('Love Calls Through the Summer Night'). There was good balance between duets and solo spots for CS and ID, so that each singer had plenty of opportunity to shine individually, before coming back together to deliver astonishingly tight - and fast - harmonies. The soprano and countertenor ranges are close enough neighbours for both parts to dovetail around, above and below each other... or blend seamlessly - and so they did.

It's also important to note how strong the rapport was between all three. Clearly, this was most obvious between Sampson and Davies, as the voices upfront. I really appreciate the fact that - even though this was a 'small' gig (massive radio audience, of course, but seen only by we privileged few in the Hall), the pair had taken the time to work out how to act their parts and bring the songs to life visually. I don't take this sort of thing for granted - it would have been quite in order to perform the songs in stricter 'recital' style and it would still have sounded glorious. But they seemed to be having too much fun. 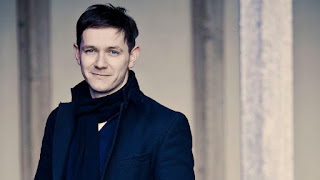 The Purcell/Britten songs perhaps brought this out the most. ID's ability to mix a little tension and edginess into the purity of his tone (as well as his body language) was perfect for his helplessness in the face of love for 'No, resistance is but vain'. This was immediately followed by the extraordinary 'Celemene, pray tell me' - CS moved away from ID as our applause for the previous tune faded - however, with she at her most seductive and he at his most impassioned, they spend the song failing the stay apart. At the censor-troubling climax ("My breasts do so heave" / "My heart does so pant" / "There's something more we want"), Sampson shielded Davies from the audience in a suggestive embrace. (If you listen to the radio broadcast - and you really should - you can hear the nervous laughter of an audience trying to applaud while loosening their collars.)

Separately, both singers were captivating. You know you will be in such safe hands during the Purcell: ID imbuing 'Music for a while' with steel as well as sensitivity, and CS singing 'If music be the food of love' with signature beauty and clarity. But equally rewarding was the Mendelssohn section, with ID's searing performance of 'Scheidend', followed by CS bringing a kind of delicate terror to 'Neue Liebe'.

This particular song leads me to Joseph Middleton, who matched his co-performers every step of the way. In 'Neue Liebe' he has to move particularly fast, peeling off agitated runs without overshadowing the singer, and it comes off handsomely - even the closing swerve where the song slows nearly to a halt before a final flurry of accompaniment has to emerge from behind the voice. Another standout performance for me was 'Love's Philosophy' - Quilter has written in the ripples and waves of the water featured in the lyrics, and JM captured the perfect dynamics for this, with the 'swells' audible, surging into the gaps in the vocal lines. 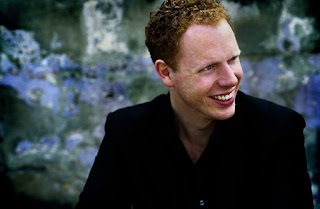 Regular readers will probably recall my admiration for JM - with CS he put together one of my favourite CD of recent years ('Fleurs' - which I wrote about here), and has a flair for programming and collaboration equal to the versatility of his playing. He's assembling a really fine, fascinating body of work: see also the Myrthen Ensemble's 'Songs to the Moon' (I very much approve of the idea of classical musicians forming 'bands' and making concept albums - brave new world!), and the lovely recital disc 'Nocturnal Variations', where he accompanies Ruby Hughes. He's also the pianist on a superb recent release of the Britten/Purcell collection, and I understand the follow-up to 'Fleurs' with CS is due before too long, as well. Great stuff.

You can still listen to this wonderful concert here on BBC iPlayer Radio - at the time of writing, it will be up on the site for another three weeks. Even better, this particular team announced shortly after the Prom that they were about to record a corresponding disc of duets - on the evidence of this performance, it'll be a must.

(Photos of Carolyn Sampson and Iestyn Davies both from the Royal Albert Hall website and copyright Marco Borggreve. The photo of Cadogan Hall is from the venue website, and Joseph Middleton from his own website: photographers currently unknown.)