Radio days (for the diary): Opera on 3

Calling any opera fans who can tune into the UK's BBC Radio 3, or use the BBC's catch-up listening service, iPlayer Radio...

I realise I'm probably very late to this myself and that some of you will have these details already. Never mind, though! 'Opera on 3' - Radio 3's regular slot for broadcasting operas in their entirety, recorded live (and sometimes actually live) - is about to return after its summer break.

Recently, the Royal Opera House announced which of its productions would feature in the strand in the next few months - which prompted me to check if the BBC website had published the schedule for all the other broadcasts as well. And - hurrah! - so they had (please note that all start times are UK time.)

For those of you who might be unfamiliar with iPlayer, take note that you have a full 30 days to listen to the programme from the date it goes out. Which means that you can still go out yourself on Saturday nights if you want to - the opera will still be there when you get back.

Here's the list - hope you find it useful. The ROH does seem to utterly dominate, but there are some interesting and enticing contributions from elsewhere, too.

Saturday 1 October, 6.00pm
Wagner: 'Tristan and Isolde' (ENO)
(I was lucky enough to see this. It was surrounded by a lot of 'distractions' - its sets by the artist Anish Kapoor, its costumes, its director Daniel Kramer who is now ENO's Artistic Director overall, ENO's ongoing problems - all of which seemed to bend people's reactions this way and that. But the singing was sublime, I felt, and this is a welcome opportunity to just close one's eyes and listen - especially with Edward Gardner conducting. My write-up is here. I do hope they also recorded the ENO 'Jenůfa', which I saw the same weekend.) 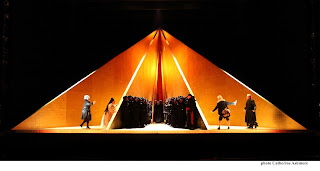 (Photo credit: Catherine Ashmore, from the ENO website. Act 1 of 'Tristan and Isolde'.)

Saturday 15 October, 6.30pm
Massenet: 'Werther' (Royal Opera House)
(I loved this production and found the opera - which was new to me - completely fascinating. Interesting casting as well - two leads who so often come across as buoyant, winning personalities playing this brooding psychodrama against type. Write-up here.) 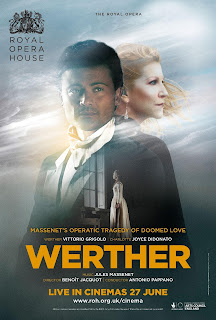 Saturday 22 October, 6.30pm
Verdi: 'Il Trovatore' (Royal Opera House)
(I hadn't seen this classic all the way through before going to this production, and was just astonished at how like attending an operatic 'greatest hits' it really is. Ekaterina Semenchuk made me come over all unnecessary, which possibly means I have a thing for vengeful gypsies, or that perhaps - as a friend nobly pointed out - I am a "chest man". Chest voice, he means. Obviously.)

Saturday 29 October, 6.30pm
David: 'Herculanum' (Wexford)
(Very intrigued by this - an opera that seems to have disappeared for over a century. Now this will be the second new production in the last three years.)

Saturday 26 November, 6.30pm
Britten: 'Billy Budd' (Opera North)
(Unbelievably excited about this - Mrs Specs and I are making a special trip to Edinburgh to see Opera North perform this, plus a Puccini double bill, in early December. So this will give us a sneak preview. Roderick Williams takes the title role.)

Saturday 3 December, 6.00pm
Puccini: 'Manon Lescaut' (Metropolitan Opera)
(I think this will be going out live - a Saturday matinee in New York - and does feature Netrebko!)

Saturday 14 January, 5.45pm
R Strauss: 'Der Rosenkavalier' (Royal Opera House)
(Enormously appealing cast for this great masterpiece - will be hoping to see it in person. Two of my favourite singers feature - Alice Coote as Octavian and Matthew Rose as Ochs - with a chance to see Renee Fleming in one of her signature roles as the Marschallin. Brilliance also in the support, including Sophie Bevan and Wolfgang Ablinger-Sperrhacke.)

According to the Royal Opera House website, two more of the season's productions - Shostakovich's 'The Nose' and Offenbach's 'Les Contes d'Hoffman' - will also be broadcast, with details to follow. I'll add the information here once I spot it, then flag the updates.