There it goes again, for another year. Last night was the Last Night of the Proms. Has the season absolutely flown by - or does it just feel like that to me because we went on holiday in the middle of August? A great trip, don't get me wrong: but I do remember feeling slightly agonised at a few of the concerts I was going to have to miss. Luckily, the Proms have enormous reach - every single one goes out live on BBC Radio 3, and the iPlayer gives you a month to catch up on any broadcasts you miss.

It's when I blithely type in a sentence like that last one, and ponder its full implications, that I realise just how lucky we are to have the Proms. A single festival that stretches across multiple venues hosting some 80 concerts. Over 70 of these are in the Royal Albert Hall, where standing tickets are available on the day for £6. (And in 2013, I saw five Wagner operas in one week, on a pre-booked 'season ticket' costing £32.) National and international audiences can hear every concert for free on the radio or internet, and some of the gigs make it to TV - either intact or in excerpts thanks to the 'Proms Extra' magazine show aired during the season.

However, to many people the Proms 'is' the Last Night, with all the baggage that entails. I wasn't there in person, but (like a lot of folk, I imagine) saw most of the TV broadcast with one eye on the concert and the other on social media. Much of the comment was enthusiastic, but the web is not a joyful place, and I was dismayed - as I still, always, naively am - at the sneering, jeering, contemptuous positions adopted by the eternally-offended: in this case, by those who claim to find the traditional flag-waving, sing-along closing stages of the event jingoistic, reprehensible or problematic.

I know this has not been an ordinary year. The Brexit vote led to speculation that the Last Night would have to adopt some kind of special tone - but what? More 'gung-ho' or more 'oh no'? Whether you take a 'little England' view that the Last Night is a shrine only to Britishness OR you find the very notion of cheerful patriotism distasteful in a year of such political upheaval - both of these camps are overlaying the way they think and feel onto the format of a concert that has remained largely unchanged for decades. Also - as so often these days whenever opinions are expressed - some important nuances get overlooked.

To begin with, in the creative fields, we always have, and always will, enjoy things that are 'problematic'. We so often separate music from the views or behaviour of its makers (from Wagner to Miles Davis). We laugh at scabrous, shock-tactic comedy which has its cake and eats it by 'shining a light' on characters it supposedly despises. We acknowledge the fine line trodden by much art and film between elevation and exploitation. To put it rather bleakly - if it's something we like, we find a way to justify it. But in the end, this becomes a necessary decision for us all to be able to consume culture with a clear conscience. It would be lovely if the murky smog of our past didn't carry the whiff of empire, but it does: and it still would, whether we sing 'Rule Britannia' and 'Jerusalem' once a year or not.

(As an aside - I can't be the only person who is irked when music and the arts are held to this kind of scrutiny when sport so clearly isn't. In this Olympics year, it's been made perfectly clear that beating other nations at things is apparently a wonderful thing that should be widely and justly celebrated. Also, Match of the Day's presenter - not for the first time - tweeted a moan about the Prom over-running into their football coverage. Irony or doltishness? Toss a coin. Anyway: music is innocent - as I shall argue.)

I've been to the Last Night once, and I felt the atmosphere and behaviour there had virtually zero to do with jingoism. The television broadcasts for once don't help here, because they only show the second half of the concert on our main channel, BBC1 - foregrounding the closing section and ensuring it still may be the only bit that totally casual viewers really know about. The first half goes out on BBC2. 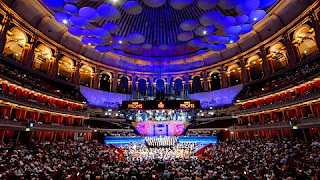 Certainly, it feels more like a party than a concert (the point has been raised that it's misleading, in that it doesn't resemble all the other, more serious Proms - but who wants the last day of term to be just another school day?) ... and there is something about that sequence of British classics that 'gets you right here', nourishing those old-fashioned feelings of pride and belonging. But what's being celebrated is not 'Britain' - but the Proms themselves, in all their multi-national, inclusive, wide-ranging splendour. The overall season represents a handsomely broad church - it attracts the most admired and renowned performers and orchestras from all over the globe; as well as classical (orchestral and vocal), it makes room for jazz, gospel, soul and rock. It champions new classical music, often played by young musicians, and programmes contemporary pieces alongside old warhorses, so the fresh stuff gets a hearing. It takes outreach seriously, linking concerts to children's television and music education. Even the loyal and attentive audiences are rightly famous, not least the Prom season ticket holders who doggedly stand through as many of the gigs as they can physically get to, even as the Albert Hall reaches temperatures comparable to the surface of the sun.

And the Last Night - across both halves - always brings this together in microcosm. It's only been conducted once by a Brit this decade, and this year by Finnish maestro Sakari Oramo. Youth players got the chance to perform a specially-commissioned new piece at the very start (Tom Harrold's 'Raze'), while 16 emerging singers later performed Vaughan Williams's 'Serenade to Music'. The Peruvian star tenor Juan Diego Flórez added Latin American hits to his Italian operatic arias - then, in a gesture of eloquent satirical genius, sang 'Rule Britannia' in full Inca regalia: a lovely mix of the clever and utterly ridiculous. Meanwhile, Last Night audiences, in particular the 'Prommers' standing in the arena, have been undercutting the patriotic bombast of the event for years. Some of this is, of course, deliberately daft: bobbing up and down, or mock-wiping their eyes. But it's always worth noting that the flags being waved represent a host of visiting nations as well as the UK (and EU).

Should we be proud of such a monumental achievement? Yes, I think it's worth celebrating. It's pointless to call the Proms the 'best' music festival in the world - there are too many different kinds of people and music for that statement to have any meaning. But it is 'up there' as a total success on so many fronts: its excellence, its scale, its range, its accessibility, its appeal and its prestige. As ever, music is where we find the hope, and the glory.