Finally, it was here - so long-awaited, it felt like we had booked our seats while still in nappies, learning ourselves how to use tools and fire. But at last, Opera North were in London to perform their production of Wagner's entire Ring cycle at the Royal Festival Hall.

I only mention London specifically, of course, because it's my patch and those are the performances I attended. But in fact, ON have taken on the mammoth task of touring the cycle around several other cities too - mostly their normal haunts, but I think we southerners were included as this was such a special occasion. ON are a well loved and respected company, so it was a privilege to have the chance to see them on my home turf.

The creation of this Ring cycle was epic in itself. You get the impression, I think, of a company that knows how to strike the exact balance between ambition and good sense. Starting in 2011, ON did one Ring opera a year, completing the set with 'Götterdämmerung' in 2014. Presumably this allowed them to spread the effort - not to mention budget - and take the time to completely nail how they wanted to present each instalment (I'll talk more about what the production involves below). Because believe me, by the time we saw them power through the whole cycle in a week, they were match fit: the singers and particularly the orchestra seemed, to a person, energised, tireless, in command. 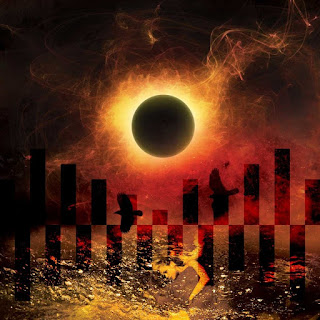 (Forgive me for not going into a full summary of the plot, or addressing the themes of the cycle in any great detail here - it would take up so much of this post, and it's easy to find that sort of background online. I wrote a little bit more along those lines after seeing Barenboim conduct the Ring at the Proms in 2013 - that post is here, if you'd like to read it.)

ON describe their version of the Ring as a 'dramatic performance for the concert hall'. I rather like this, not least because Wagner was very keen on using particular labels for his work that avoided calling them 'mere' operas: for example, "Gesamtkunstwerk" for a 'complete/all-embracing artwork', or "Bühnenweihfestspiel" for 'Parsifal', a 'festival play to consecrate the stage'. I like to imagine there should be a long, single word in German for 'dramatic performance for the concert hall', should anyone want to suggest one...

But more importantly, the description is 100% accurate. For those of you who haven't seen any photos of the production: there's no pit - the entire orchestra is on stage. In front of the orchestra runs a relatively narrow platform for the soloists, with a row of chairs. On the back wall, there are three large screens. These screens are in constant use: they show the surtitles - and also, when helpful, add a brief summary of the action, or name new characters if several appear at once, so there's no chance of anyone getting lost. Behind the text (and throughout), the screens show the relevant terrain for the on-stage action: forest, sky, water, flame. 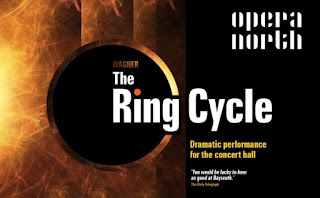 Every potential or apparent limitation of this set-up was turned into a virtue. I felt that in the absence of sets, the projections were a genius idea. (I've heard it said that some Wagner buffs prefer concert-style performances of the Ring, since it's quite hard to stage without at least some elements appearing ridiculous.) To ON's credit, they didn't try to depict in any kind of crystal clear way the splendour of Valhalla, say, or a full representation of Fafner in dragon form. Instead, in these two instances, we saw mist-shrouded peaks and the hint of a scale-ridden, indistinct face. The mix of abstraction with constant motion on the screens meant that the visual 'motor' was always running: something to occupy our eyes without actually distracting from our focus on the performers - and one highly successful effect of this cycle, by bringing the players out of the pit and lining up the singers level with them, was to keep our attention firmly on the music.

The visual inventiveness wasn't confined to the screens. What might've first appeared to be co-ordinated concert attire was in fact a character-driven dress code. There were some visual 'quick wins' - such as the shimmering blue dresses of the Rhinemaidens - as well as razor-sharp, lower-key touches. Wotan's smart waistcoat and tails getting more dishevelled as his grip on authority weakens; Fafner running his bright red tie through his fingers as he bleeds to death from his wounds; Brunnhilde adding a single shooting glove and bovver boots to her concert dress; Siegfried's naive machismo captured in his bow tie undone around his open neck, like a groom elated to survive his stag night.

The stagecraft and direction also elevated simplicity into sophistication. While the soloists mostly 'sang out' at the audience (as in a 'normal' concert set-up), they also fully, physically acted their roles. So, characters in conversation with each other were actually standing side by side, singing at us. This seemed a little odd for a matter of minutes, but it's incredible how quickly you simply lock into it. Clearly, projecting the voices straight into the audience was was the best option for the sound; but also, movements which might otherwise have appeared artificial - for example, one person handing an invisible drink to the other meant they each had to 'give' and 'take' with arms out towards the house - seemed natural and unforced, because they were in total mutual support with the music. Our buy-in to this style of performance meant that it could be used increasingly boldly - Siegfried's murder was a stark, nightmare moment, with Hagen thrusting outwards and Siegfried, next to him, instantly arching forward in agony. 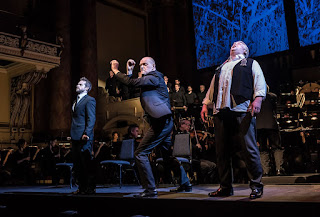 This slight distancing also heightened the tension - particularly in the love duets, where the characters, having sung their passion to us, were only then released, to come together and embrace. In many cases, following a death, the victim simply crossed their arms over their chest and retreated to a chair, in darkness. In fact, the chairs themselves were pressed into prop service, as Alberich slithered across them when grappling with the Rhine's wet rock.

We were lucky enough to have seats close to the stage, and witness just how skilful the acting on display really was. All the soloists continued to face outwards and (re)act when not singing (this is not necessarily the case in concert renditions) - allowing them to flesh out their characterisations. Some of the finest examples of this physical acting came from Wolfgang Ablinger-Sperrhacke as the god of fire Loge in 'Das Rheingold', seasoning his ambivalent body language with constant flame-like rippling of his fingers; Robert Hayward's agonised Wotan and Lee Bisset's terrified Sieglinde in 'Die Walküre', Richard Roberts's grotesque agitation as Mime and Jeni Bern's remarkably natural stop-start movements as the Woodbird in 'Siegfried', and in 'Götterdämmerung', Andrew Foster-Williams seemed to make Gunther almost shrink into himself with guilt and horror.

And this is to take nothing away from the singing, which felt so strong to me throughout the ensemble that it seems almost unfair to single out individuals. There are a few performances I feel I should mention, however. Kelly Cae Hogan was a triumph as Brünnhilde - not afraid to show (and sing) vulnerability and tenderness but unleashing the fury when required - again, the expressiveness in her face as well as her voice made the character - who undergoes the most extraordinary change, from virginal warrior to passionate mortal lover and ultimately, a conflicted mix of the two - vivid and true. 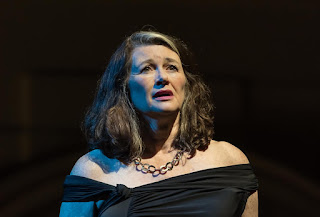 Johl Pohlheim managed to make Alberich both intimidating and pathetic, combining an ingratiating, twisting physical presence with a threateningly strong delivery. It strikes me that these two performances in particular are those where the soloists could develop the characters over several of the operas - possibly not a coincidence. To me, the most outstanding 'one-off' was Mats Almgren as Hagen in 'Götterdämmerung', willing to make his voice somehow evil - an unflinching, hideous portrayal (this is a huge compliment, by the way) - no less impressive after he had played Fafner in two of the earlier operas. (Several of the singers inhabited more than one role, lending some interesting perspectives - for example, Giselle Allen's superb characterisations of Freia and Gutrune draws the connection between the two as women used ruthlessly as pawns in the men's games, and James Creswell's apparent implacability helps bring about his downfall as both Fasolt and Hunding.)

My closing words of admiration, however, are reserved for ON's orchestra, conducted by their outgoing music director Richard Farnes - who has clearly chosen something of a monumental project as his company swansong. Again, with our close seats, we would've been happy to let Wagner's music overwhelm us - but the level of detail Farnes drew from the players was astonishing. I've never been so acutely aware of the percussion intricacies the work demands, for example (I wonder if timpanists have to make a will by law before tackling 'Götterdämmerung'?) - not just because I could see what they were doing, but I could really hear it. I've never appreciated quite so sharply how the strings and horns balance the texture and melody. I've never been able to pick out the recurring themes/motifs so easily. The operas felt like one thrilling rollercoaster ride after another, surely much shorter than their actual mammoth running times. Though we stumbled out of 'Götterdämmerung', reeling, elated but also exhausted... I would happily do it all again this week.

Which, remotely, one sort of can. As I type, 'Das Rheingold' is actually in progress for the last time in the tour, at the Sage Gateshead. BBC Radio 3 are broadcasting the whole cycle from the Sage live this week, which means they will also be available to listen on BBC iPlayer Radio for 30 days afterwards. The Leeds performances were also filmed for streaming later in the year (when more details about this are available, I'll spread the word).

Please try and experience this Ring cycle in some shape or form if you possibly can. It's a stunning artistic achievement in its own right. But I think it also demonstrates how Opera North - not an outfit with unlimited resources - can meet a challenge as vast in scope as the Ring head-on and make it work using innovation, creativity and flair. And crucially, by giving the orchestra and (in 'Götterdämmerung', the scene-stealing chorus) such prominence, they've demonstrated to audiences their utter confidence in the excellence of their company. (I'd like to think the board of English National Opera could learn a few lessons from this: how to treat singers and musicians with the respect they deserve, and how there are more artistic responses to financial realities than merely cuts.)

In future, I'll respect Opera North's generosity in bringing their Ring cycle to me, by making more of an effort to travel to see them. Roll on their Puccini double bill and 'Billy Budd' productions towards the end of the year. Tickets already booked.

(The images in this post I believe are all copyright Opera North, drawn from their own Ring website, Sage Gateshead and the Southbank Centre.)