Just over a year ago, Matt Howden - under his usual songwriting/performing alias Sieben - released a digital EP called 'Lietuva'. That was the seed of a project that now comes to fruition with an astonishing two-CD set, 'The Old Magic' and its companion compilation 'The Other Side of the River'. What happened in between is best described as a brilliant sequence of ongoing, shifting musical invention and creativity. One quality that helps to make Matt's work unique is that his only real influence seems to be himself, constantly examining and re-casting earlier ideas and projecting them into a kind of sonic future - making me sometimes wonder if he might be the first and only artist to build up a forward catalogue. 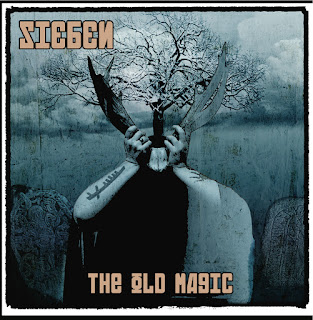 Where to begin? Well, for those of you who haven't read any of my earlier posts on Sieben (for shame!), Matt Howden writes songs for voice and violin, feeding both into a loop station to build up layers of sound. At even the most fundamental level, his work links acoustics and electronics, as he creates beats by striking his fiddle, or even scratching his stubble against it for a 'shaker' effect. He makes backing vocals sound distant by chanting 'into' the violin rather than the mic.

One of the most satisfying aspects of Sieben for me, is that Matt shows signs of an obsessive thoroughness, a determination to create 'complete' artworks, which I think you can trace through from the earliest records to the ones I'm going to write about here. Finding his signature sound against a kind of 'dark folk' (or neofolk, if you must) background, Matt produced arguably three utter masterpieces of the genre in sequence: 'Sex and Wildflowers', creating a new floral language around the loops, 'Ogham Inside the Night', delving deeper into Celtic runes and pagan themes, then 'High Broad Field', a fully worked-through mystery play, with parts taken by a line-up of great vocalists - and even an accompanying film.

But then, it was as if something snapped, and Matt left genre work behind. Turning the focus on himself, he produced the blistering, lustful 'Desire Rites', and re-recorded some of his older work in similarly sharp, honed fashion on 'As They Should Sound'. Each album seemed to newly express an iron will to produce something radically different from the previous release - even though, the occasional guest musician notwithstanding, he never 'cheated' against his violin/voice template. The reflective 'Star Wood Brick Firmament' gave rise to the restless, sinister propulsion of 'No Less Than All', which then led to the confident, intimate 'Each Divine Spark', which brought together the best atmospheres from both its predecessors.

It's worth going over a bit of Sieben history (I know it's not the first time I've done so) because it's always relevant to the current material. After 'Each Divine Spark', Matt upgraded his kit and vastly increased his palette of sounds, giving the violin a range of new orchestral guises. Suddenly, there could be more noise, more layers, and the Sieben approach again began to shift. Matt (re-)discovered a ritualistic element, allowing the songs to stretch, develop, change, evolve. The two new numbers making up the backbone of 'Lietuva' ran to about 10 minutes each. Moving to digital-only releases, Matt was no longer constrained by how the music best 'fit' onto CD or vinyl. Alongside the two epics, the EP included 'self-covers' of two older tracks, re-recorded using the new equipment, given a new (re-)lease of life. 'As They Could - now - Sound.'

This set the pattern for two further EPs, 'Norse' and 'Briton', freshly-minted epics nestling alongside re-animated classics. Along the way, two things happened. For the listener, as we followed the EPs' audio-tour of old Europe, the folk-world leanings detectable in 'Lietuva' gave gradual ground to something more gritty, solid, relentless. Closer to home. For Matt, at some point, the realisation must've set in that this was, after all, an actual album forming - with its own coherent theme, somehow coalescing into a seamless whole.

Inevitably, though, as much archaeologist as musician, Matt kept digging. To assemble the new album, 'The Old Magic', he went to the trouble of re-working three of the new tracks, 'Old Magic' itself, 'Ready for Rebellion' and 'Black Moon Rise Again'. On the original EPs, each one was relatively bright, expansive, spacey, long. Here, they are shorter, honed and earthier - the rhythms pound harder, the layers mesh more tightly, the songs no longer give any quarter. They all show greater strength, and radiate a kind of sensual power - more groove, more intent.

The title track - a masterpiece in both its incarnations - undergoes a spellbinding transformation. The sheet lightning violin lines that danced on hot coals through the original are now combined so closely, they sound more like an continuous, wavering pulse, fizzing against the grinding bassline. 'Ready for Rebellion' - previously a trance-like call to arms over nearly nine minutes - is now barely a third of that length, but still with nine-minutes' worth of energy. It too has an extended electric shock of a violin riff pulled forward in the claustrophobic mix and distorted, powering the song forward at breakneck pace.

Other songs make it from the EPs to the album unchanged. They've all, to some extent, been conceived as 'singles' of sorts (or 'double A sides', he writes, suddenly feeling quite old) - with no hiding place - and as a result, the track listing consists of nothing but highlights. 'The Other Side of the River' (new title, but originally the stand-out 'Užupis' from 'Lietuva') retains its full 10-minute majesty - I imagine because it's impossible to cut a second of it. It now forms the glorious climax to the CD, its message of simultaneous affirmation and denial - very appropriate for an artist who stands proudly apart - ringing loud and clear over its push-and-pull lead and bass lines.

Made by a songwriter and performer who tackles his past head-on - whether to push back against it through new work or re-make it to fit his present - 'The Old Magic' succeeds layer-upon-layer, just like the music. It nods to those original genre flourishes - perhaps the 'old magic' themselves, in part - as we hear trace elements of the mid-2000s Sieben: not just the pagan/folkloric themes, but also the blurred edges neofolk shares with martial/industrial sounds. It's as if they've been lying dormant until Matt generated the sheer sonic heft needed to resurrect them. (Even the Ogham tattoo - familiar to longer-toothed fans - makes a prominent re-appearance on the artwork.) At the same time, more recent Sieben approaches fit seamlessly into the overall scheme: 'Come, Raven King' and brand new track 'A Hart for St Hubertus' weaving the 'Each Divine Spark' characteristics of calm and space into the overall maelstrom.

The second CD has a practical purpose - it gathers up the original versions of the EP tracks re-worked for the album, along with the older song 'covers' that accompanied them. For the long-term Sieben listener, hearing these updates together is like meeting old friends, remembering all over again why you loved them, but realising they've changed for the better, even matured. Pleasingly, there's no sign that anything was 'wrong' or 'lacking' with the old versions. Matt has resisted any temptation to 'blast' songs like 'Loki' and 'Knudlustysummer' into the stratosphere, instead allowing the new wider range of sounds to spruce them up and dust them down. Pacier tunes like 'We Wait' and 'Cult of the Fallen' already lend themselves to the 'Old Magic' treatment, digging their rhythmic heels in deeper than before. 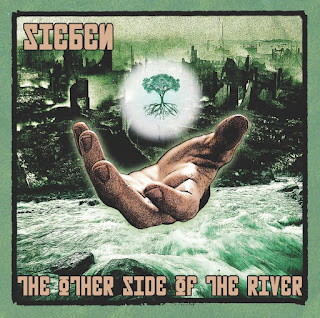 Taken together, these albums are possibly the best 'entry point' for Sieben you could wish for. The companion CD, 'The Other Side of the River', is a great selection of songs from various points in Matt's career, but sounding here like they've always belonged together. Be warned, this disc is limited to its first pressing, so don't hang around before buying the double set. (Handy link to appropriate shop here.)

'The Old Magic' itself is surely his finest achievement to date. Its slightly odd, drawn-out creation perhaps helped make each individual song such a jewel. But more than that - as so often with Sieben albums - it manages to bring together the best elements of what you already love about Matt's music and somehow combines them with something brand new: always looking back, always moving forwards.