Spexit - to a new culture

As a rule, I try to keep what I add to social media - as well as what I take from it - positive and non-political. (The former often necessitates the latter!) It should be for the good things in life - which for me, as you know, are mostly cultural and especially musical. It's about making connections, not severing them: sharing love, not spilling hate.

This week, it's more difficult than usual to stay true to those aims. Full disclosure: I voted Remain in the referendum on whether or not the UK should stay in the EU. I will always believe that collaboration, partnership, openness and tolerance contribute more to the greater good than separation, division, mistrust and insularity. In the aftermath of the Brexit vote, it seems likely there will be dark political and economic times ahead, but this is not my field - I do not want to downplay the fear and disappointment many feel, or unwittingly patronise anyone by commenting on it. I feel we've been subjected to cartoonish, media-distorted personality-driven campaigning. But I'm also aware that rational people, from left and right, north and south, young and old - no matter who's currently yelling at who - got behind both sides of the EU question. Simplifying the divisions in our nation will do nothing to heal them. To my mind, it's now up to whoever leads us into this uncharted territory to guide us through it. I wish them, and us, luck. 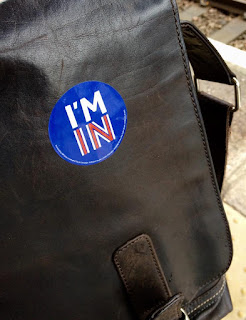 Part of all this does fall within my 'remit', however. Not so much can we cope with the outcome - more can we neutralise the poison of the campaign? Racism has always existed, and always will - along with sexism, homophobia and any type of prejudice that involves a group of people turning their fear of another group into hate and rage. This has the unfortunate outcome that, however reasonable or thought-through a Leave voter's intentions might be... for one inglorious day, they are siding with the racists. On the same page. Tarred, ironically, with the same brush.

How easy has it been to look across the Atlantic recently and feel the US is gripped by madness: the rise of Trump, the failure to tackle gun crime, the venom of the Christian far-right? But surely most of us realise that the overwhelming majority of Americans want no part of this lethal arrogance. Will mainland Europe or the rest of the world now extend us the same courtesy? Will they realise that many of us wanted no part in this - by which I mean holding a referendum at all, let alone Leave or Remain? Or will they just see the buffoonery and sloganeering?

Well... THAT is not my society. Spexit. If I'm dragged kicking and screaming out of the EU, I will have to bear the consequences along with the rest of my fellow Brits. But I am still European. And - as a citizen of the internet - I, like you, am global. There are no borders here.

Against a political and economic background - where I can more than likely achieve nothing - there is a cultural aspect to this - the need I feel to express the kind of Britain I want to live in: inclusive, welcoming, multi-faceted. Take today's Pride celebrations as an example of what we can achieve when we take a collective decision to reject prejudice. Many of us, I'm sure, already lead very cosmopolitan lives - but perhaps some of us don't, or could do more.

How many people do you know from elsewhere in the EU, who you work with, or come into contact with, every day? There's never been a more crucial time to make them feel welcomed and valued.

I think with admiration about some musicians I support and who have become friends (real and 'virtual'), who have found receptive audiences for their work abroad, who have forged collaborations across Europe accordingly, and who have encouraged other overseas artists in turn, in projects both on the continent and back in the UK. Or there's a writer from France who has come to this country, immersed herself in its influences and produces unique work as a result. And then I think - what more could I have done to help these people? To show my appreciation for their open-mindedness, their inclusiveness? How could I have given those projects more support? Why do I write so much about UK - hell, London - events when I'm lucky enough to have people reading Specs from much further afield?

What have the countries in the EU (and elsewhere) done for your cultural life? Plenty. It doesn't matter - music, movies, art, architecture, food, design, sport, technology - whatever your thing is, consider the borders those ideas and activities have crossed. Spread the word. Start a blog. Start a club. Go to the library (if it's still open). Educate yourself. Learn a language (I'm going to try and pick up my German studies).

I realise this now feels very small. None of this will restore a currency's health, bring back a lost job, or ease a negotiation. But the issue of who we are, rather than what we are, has arisen - and will Remain. Our island may drift further from the mainland. But we, the people in it, have the power to reach outside our perimeter, and start bridge and tunnel repairs. Now.