It's been a strange few weeks at Specs Towers. First of all, I was waylaid with a heavy cold - I can't bring myself to call it man-flu, but one of the most irritating symptoms was a head fuzzy and befuddled enough to stop me writing in the evenings. I'd get home from work (yes, one day apart, I nobly STRUGGLED IN) and the thought of more screentime would send me to the sofa with smelling salts.

Then, almost instantly, work started on our entire heating system, causing such extensive domestic mayhem that we've fled into a nearby 'motel' for a few days. I am typing this at dead of night into Mrs Specs's laptop, curtains closed to the glorious car-park view outside. It wasn't like this for Hunter S Thompson. I don't have a creative cigarette dangling from my mouth or a suitcase full of drugs - well, unless you count Strepsils. We were rock-n-roll enough to smuggle some extra tea-bags into the hostelry, though, so think on. You'll never take me alive, copper.

Anyway - while I'm displaced and have the chance to assemble a fairly quick post, I can at least try to be useful - as some of my favourite artists and bands have activities of note coming up very soon... 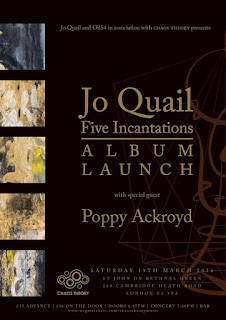 Jo Quail will be a familiar name to Specs readers, I'm sure - to my mind, she's one of our most innovative and arresting composer/performers, building her instrumentals up with layer upon layer of electric cello, re-shaped and re-imagined into ever more adventurous rhythms, hooks and effects. Her new album 'Five Incantations' is an extraordinary piece of work - as the name suggests, each track develops into a peak, sublime state, utterly involving for the listener, conjuring all kinds of connections and images - as if the music was reaching inside you, demanding a response. I can't wait to write about it properly once it's released. The record is constructed as one continuous suite of pieces - with no guest musicians or unnecessary sonic gubbins, so that JQ can perform the entire record live, solo. Which is exactly what she's currently doing. After premiering the work during her annual jaunt to Australia, the UK launch concert is finally upon us: Saturday 19 March at St John on Bethnal Green. The atmosphere and acoustics in this venue are perfect for Jo's swirling, searing sound - so if you're intrigued and even vaguely near the capital that weekend, come along. Here's the link for tickets - not many left, so make haste!

This superb performance will give you a taste of what to expect. The new CD will be available at the concert, but if you can't get there, don't let that stop you pre-ordering it here.


Trembling Bells made my favourite album of last year, 'The Sovereign Self', a record so overflowing with ideas it felt like the musical equivalent of a river bursting its banks, tunes and riffs exploding from even the most noise-cancelling headphones. One of those bands where every single member is absolutely brilliant at what they do, them Bells swing like a pendulum between folk and prog rock - helped enormously by Lavinia Blackwall, a vocalist who can do both formidable purity and earthy allure - often at the same time - and chief songwriter/bandleader Alex Neilson - perhaps one of rock's only genuine 'lead drummers', who lifts his instrument from 'mere' timekeeper to an indelible watermark in the band's sound.

As if to prove they have music just pouring out of them, they're releasing a mini-album in April with a generous seven new songs - this video is the title track. One of the reasons I think it's a particular winner is that it does hark back to some of their folkier earlier records, but filtered through the more confident, powerful sound of the last album. Pre-order 'Wide Majestic Aire' here - and catch them on tour if you can, they're pretty wide and majestic live, too. The London date, Thursday 14 April at Café Oto, is on sale here - and you can see other dates in the tour on the right hand menu, should they be of use. (Oh - and they have an exclusive single out on Record Store Day, too - 'Who Call the Law?'. Perhaps, then, they shall rest. At least for a few minutes.)


Barb Jungr - a jazz singer whose endlessly brilliant work continually re-defines the term - has just released another great album, 'Shelter from the Storm' - again, a record I'm planning to write about at greater length before too long. Famed as one of our finest song interpreters, she's particularly good at getting under the bonnet of 'men's songs' - and completely re-tuning the engine. She unlocks angles, sensitivities and viewpoints you simply wouldn't detect otherwise. Recent albums include the superb 'The Men I Love', devoted to male songwriters; the varied, addictive 'Stockport to Memphis'; and the all-out masterpiece 'Hard Rain', a bold concept album featuring some of the starkest Bob Dylan and Leonard Cohen songs re-cast into an unblinking but beautiful wake-up call. 'Shelter from the Storm' is, rather satisfyingly, a sequel of sorts to all three - with Dylan and Cohen again cropping up amid a wider-range of other songwriters... but especially as Barb returns to songwriting herself, here with pianist/arranger Laurence Hobgood. Listen to one of their lovely compositions below... then buy the album here... and I implore you, see her live - she's unmissable. Concert listings are here - I'll be at one of the London dates (21 to 24 March), which - take note - are at the lovely Pizza Express Dean Street jazz venue.


Back as soon as I return from Specsile....