Today marks the release of Jo Quail's latest album, 'Five Incantations'. Regular readers of this blog will know that this makes it one of the more exciting red letter days in the 2016 Specs calendar - but for the benefit of the uninitiated....

Jo is a cellist/composer who mostly writes and performs her heady, atmospheric music using her electric cello in tandem with a formidable array of pedal technology. Watching a JQ solo live set, you become aware that this is almost like a dance. Standing to play, she cradles the cello as her feet dart from one button to another, looping rhythms and hooks, building up layers of harmony, bending and shaping the sound to her will.

That said, the machinery serves the writing - not the other way round. JQ's body of work shows that she very much lets the composer's heart take the lead - then tasks the performer's head to realise it. As a result, she has something of a double musical life. Because her material is 'neo-classical' - in the literal sense - she can be found supporting dark folk or industrial bands whose audiences adore her sound and innately respond to the ritualistic and spiritual power of looped strings. (I have seen Jo in a support slot many times now and I think she has a 100% success rate of reducing other bands' audiences to appreciative silence.)

But as a contemporary classical composer - which I firmly believe she is and deserves to be recognised as such - the events she stages herself are where she can truly spread her wings. Her 'Nocturnes' concert featured her own material re-imagined with additional percussion, along with a full performance of her ambitious - yet utterly confident and fully realised - 20-minute piece for choir and strings ('This Path with Grace'), and arrangements of some eclectic covers - from de Falla to Van Halen - for her newly-formed cello quartet. 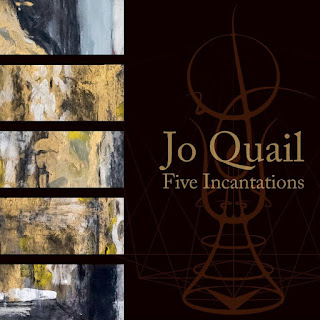 'Five Incantations' represents both a natural next step, yet also a slight change in approach. An instinctive collaborator - as my brief summary of 'Nocturnes' suggests! - Jo has featured guests on both her previous albums (and the launch gigs that have accompanied them). Here, perhaps because the music on it is particularly personal - inspired and launched into life by her deeply-felt connection with Australia, where she tours every year - she has deliberately set out to make a completely solo record, that can be performed live, alone, from start to finish. Fittingly for someone with Bach at their fingertips, Jo has created a cello suite for the 21st century.

This isn't to say that 'Five Incantations' is scaled-down in any way - far from it, it actually reaches for extraordinary heights and nails them. At its root, there is a single concept, and a single method. The album is designed, as the name implies, to conjure up an entire universe for the listener - the tracks cover earth to air, fire to water, then finally, Spirit. To achieve this, Jo tells us that she used the same miniature theme as the starting point for all five pieces - so while the individual titles spiral off into their own melodies and structures, the album repays multiple listens (your instructions: dark room, headphones) as certain echoes shimmer or dart in and out of your consciousness as you move between tracks. It's rare to find a set of tunes so expertly constructed that you stand a genuine chance of hearing something new every time you play them - but this is one such record.

The sequencing is also a delight. The opener, 'White Salt Stag', is the perfect overture, in that it introduces a hyperactive beat, but below a stately, evenly-paced, meditative melody which only gradually gives way to more rapid bow strokes as the intensity increases. This otherworldly opener, fast and slow at the same time, sets the scene before the album then splinters into two beatless tracks, alternating with two more rhythmic, driving pieces.

Beats - created with strategic strikes on the side of the cello, then looped - are a particularly prominent feature of the album: more so, I feel, than before. Even when not loud as such, they're insistent, pulsing. The third incantation, 'Salamander', could well be the slinkiest groove Jo has yet produced. It boasts an off-kilter time signature (I think it's 7/4, off-kilter time signature fans), but thanks to a perfectly-placed low 'ping' - again, I think this is between beats 4 and 5 in the bar - it has an undeniable irregular 'two-time' swing. As if to reflect this, the melody circles round itself and eventually - some half way through - powers into the cello equivalent of a Led Zep riff and a 'false' climax. (Jo's lifelong love of hard rock and her recent foray into playing with some hip-hop artists seem to have collided beautifully in meshes of sound like this.) The beats are ultimately submerged, and 'Salamander' surges even higher, combining searing high notes with almost a drone effect. As with most of the tracks, you're taken on a mystery tour - even if you think you have the measure of where each tune is going, you can expect to be thrillingly wrong-footed and joyfully surprised by the end.

'Stag' and 'Salamander' both lead into quieter pieces (again - a joy of the sequencing - is that Jo makes even these more full-on tracks close in ambience so the transitions are seamless): 'The Breathing Hand' and 'Between Two Waves' respectively. Beauty amid the beats, these two tracks still show different sides of Jo's talent. The former anticipates 'Salamander's drone with endless unbroken notes colouring the background while long-form loops bring the melody back to line up against newly-played harmonies: the lines moving tentatively towards each other create a sublime tension - and the resolution on the very final chord is a moment of eye-widening loveliness. 'Between Two Waves' also maintains harmonies but as a brilliantly written and played solo cello tune without loops (again - writing first, execution second).

Perhaps it's the final track, 'Gold', that's destined to be the incantation that lodges itself firmly into our brains and prompts us to play the whole thing over again the second it finishes. To all intents and purposes the lead 'single' from the album (see the video below - although I'm writing here about the album version, which stretches to twice the length), it reaches inside the listener. That's your heartbeat you can hear - and with the killer combination of yearning melody and rebounding background string figure, it seems to be pulling you in an Escher-like path back into the real world without ever quite reaching it. Then, about four minutes in, Jo's cello has suddenly become a soloing guitar that collapses into a second blast of rhythm, this time with a bow-stroke. You simply listen to the rest of the track in wonder, as all its disparate features - the downward slope of the slow riff, the climbing and dancing upwards of the high notes, the main theme - come together. And fall away. And layer some more. It really is mastery over sound - to the extent that I only felt able to return to my home planet once 'Gold' let me, as the final heartbeat faded away. (It's also worth noting that Jo performs this album at 432hz - a tuning frequency that is meant to be more in line with our natural biorhythms and, as such, affect the listener more deeply. It works.)


(This amazing video is by Michael Fletcher, creator of habitually splendid visuals and a frequent collaborator with Jo.)

So - it's a masterpiece. It achieves everything it sets out to do. Each track is utterly arresting, for its own individual reasons: you could cite the brilliant construction of 'White Salt Stag', the lush gorgeousness of 'The Breathing Hand', the sheer groove of 'Salamander', the bewildering virtuosity of 'Between Two Waves' or the infectious addictiveness of 'Gold' - all would be correct, and all of those descriptions have relevance to all the other pieces, too... But however - or wherever - that original theme ended up, the unity of the whole album lifts it to another plane altogether, providing the grateful listener with not just a beautiful record, but a world in which to retreat: a conundrum, comfort, and companion.

Last Saturday also saw the UK launch gig for 'Five Incantations', at St John on Bethnal Green in London. Again, something a little different: Jo would be performing - as planned - the entire album in order from start to finish, without any breaks.

Those of you who've been to St John's will know that it has an atmosphere all of its own - slightly dark and forbidding (its celebrated Stations of the Cross paintings by Chris Gollon are unforgettable) but cavernous and with an immense acoustic. So, a beautiful support slot by Poppy Ackroyd - a new discovery for me - gave the audience some idea of what to expect. PA also uses looping technology but almost in the form of what looks like a personal mixing desk by her side. Her 'actual' instruments are piano and violin, which meant we were treated to an echoing, chiming cascade of notes in a crystal clear mix. Winning stuff.

Jo took the stage, and began 'White Salt Stag'. It's difficult to convey just how powerful the next 40 minutes were. On disc, of course, the album is still a 'produced' listen, with the different elements balanced to perfection. No-one asks - or wants - that of a live performance. What we got - again, blessed with a sound mix of jaw-dropping clarity - was 'Five Incantations', in visceral, nuclear-powered format. The dynamics were thrilling throughout, with immense, pounding beats punching through the swirling, recurring themes. Everyone was silent, still, transfixed. Jo, after several weeks touring this down under, was note-perfect, serene but quick to catch fire, never once breaking the spell.

Encores included a lovely duet performance with Poppy Ackroyd of the live evergreen, 'South West Night'. As wide open as the Australian night sky it celebrates, Jo often uses the piece for group playing when she's on bills with like-minded artists, and this version worked a treat. Also, as if picking up on the unusually powerful sound, Jo played monstrously exciting live versions of classics 'Laurus' and 'Adder Stone', the individual nature of the tracks allowing us to burst into happy, grateful and frequent applause not just for those tunes, but for the skyscraping, heroic achievement of the whole night.

Now you'll be wanting to buy 'Five Incantations' - so please head over to Jo Quail's Bandcamp page, for best results.

And here's the Jo Quail website for news, live dates and other miscellany.