Letter of the boor: replying to 'Opera' readers

I suppose there's something appropriate about there being a lot of 'volatility' in the opera world. I've written on the blog from time to time about controversial subject matter in opera, or the baffling examples of critics 'crossing the line' when discussing performers - and even the artform's inexplicable magnetism for ill-mannered audiences.

And then there are events that I feel strongly about but haven't discussed in depth yet. One of these in particular - the funding issues surrounding English National Opera - I don't really feel qualified to write about at length. My emotional response to it is fairly simple: ENO is a bold, accomplished company, with a superb orchestra and chorus, producing really fine and utterly accessible work. The Arts Council, as a collective, may feel it should be wanging on about 'business models' and that its function must be, in some scenarios, punitive: but on the other hand, it could be taking positive steps to promote our most creative and innovative ensembles and ensure their survival and prosperity.

But today's problem I feel I may have flirted with - or skirted round - in the past, without getting stuck in. It's to do with audience response. (So, this is not the same as the current coughing, rustling, talking, texting and general epidemic of being bloody annoying that I tackled recently. That's simply a case of not knowing how to behave in public.) I'm talking about nastiness - most prominently of all, the practice of booing productions, but also making noisy negative pronouncements to anyone within earshot, or progressing to full-on character assassination on social media.

So here I am, getting stuck in: Just stop.

I ought to add that I consider myself very lucky on, say, Twitter. On the opera front, I follow - and am followed by - a group of folk (punters, critics and even a few singers/players), who are all, without exception, lovely. I'm being sincere and serious. I feel surrounded by wit, knowledge, love for the subject and enthusiasm for its performers - and if, as a relative beginner, I have a question or need a recommendation, any of them helps out without hesitation.

The thing is, that through outraged retweets or just innocent bouts of searching, it's all too easy to see the flipside - and away from the ether and into print, I was genuinely shocked by a couple of correspondents to the letters page of the latest issue of 'Opera' magazine (May 2015). 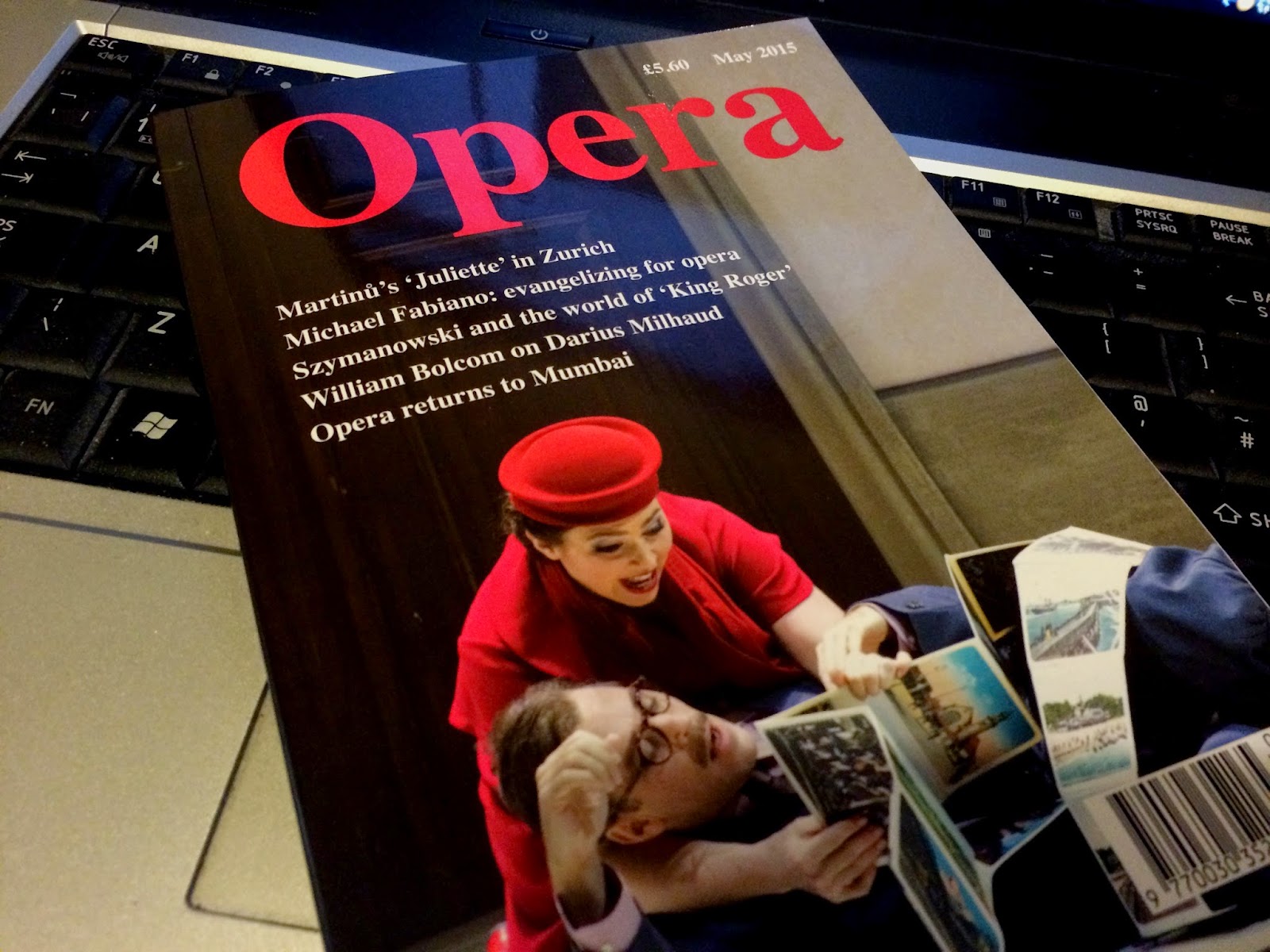 The first was written by a chap who was outraged at the magazine's stance on booing. It had invited critics, producers and performers (not punters, as the letter-writer was at pains to point out) to comment on the phenomenon and understandably, no-one was particularly keen. This guy was quite keen on booing - not singers, but producers and directors. He felt that if we can complain about a bad meal before paying in a restaurant, we should be able to voice our disapproval in the opera house.

(I'm struggling to think of another occasion where I've read such a galumphing blancmange of an analogy. It utterly relies on everyone wanting exactly the same thing from a personal experience, music or food, and then feeling entitled to yell about it at the top of one's lungs in front of anyone who'll listen. Inane.)

And the final flourish of uselessness came with his parting shot about protesting against these (somehow definitively) poor experiences when "needed". I read this with open-mouthed horror. At most of these things, you do tend to get a lot of other people along. Luckily, this modern-day iconoclast - a hero to us all - can decide for us, pitiful hive-mind that we are, whether we should've enjoyed it or not and then make a howling din about it accordingly.

I didn't find the second letter quite as offensive, but I was still thoroughly nonplussed by it. The writer felt that the ENO production of Wagner's 'Mastersingers' was much better than the ROH's 'Rise and Fall of the City of Mahagonny' ... but expanded it into a lament that ENO was under funding scrutiny rather than ROH. It's as if the financial fortunes of either company should not just be hardwired, somehow, into its skill and repertoire (rather than, say, rely on the people running the business), but on the particular pieces he happens to enjoy. Again, this seems to me a type of reverse-fannish lunacy.

I was so dispirited about all this, that I wrote to the magazine myself. Since open letters are - fittingly - all the 'rage', I'll leave you with the e-mail I sent, below:

I was thoroughly disheartened by the first two letters you published in your May issue.
The first complained about your not asking paying customers their opinion on audience misbehaviour. They reserved the right to boo "insulting nonsense" - comparing the scenario to complaining about a poor meal, as if you bawl loudly at the waiter and other diners before you even reach the chef - "whenever it's needed". Needed? Ugh.
The second seemed to think that because they like a recent ENO production - but are not so keen on a new ROH one - that the Arts Council should be gunning for the latter instead of the former.
I am tired of these people assuming they speak for me. You did well to pack both close-minded and small-minded into a couple of columns, but in future there's no need, I assure you.
It just goes to show, that in all the brow-furrowing and hand-wringing I see about opera's elitism/snootiness, our biggest worry is not the artform itself, nor those who stage and perform it, nor even ticket prices. Instead, it's the few - yet disproportionately vocal - arrogant buffoons in the audience who know an awful lot about opera, I'm sure, but very little about manners or understanding.
If that sounded excessively or indiscriminately insulting, well, yes: that's rather what booing is like.
Kind regards, etc..."