First impressions at the National Gallery

'Inventing Impressionism' is the current headline Sainsbury Wing exhibition at London's National Gallery and I have to confess that after reading about it for the first time, it dropped off my radar. Not sure why: perhaps I suffered from that feeling - fairly common, I think - that Impressionism is sort of everywhere. All those posters and greetings cards. Haven't I ALREADY seen EVERY Impressionist painting, for pity's sake? Well, far, far from it, as this exhibition proves with some gusto.

I suppose to a certain extent the audience for the show is self-selecting. If you're anywhere near London while it's on (you have until the end of May) and you like the Impressionists, you'd be mad to miss it. It's a huge enterprise and there's absolutely no way you'll regret going. And on the flipside, if you're not that keen on this style of painting, keep well away or you'll just get upset. After all, it's not simply about Impressionism - it's about support and enthusiasm for Impressionism: that of one man in particular, Paul Durand-Ruel.

I won't attempt to tell the whole story here, because the exhibition does so itself, remarkably successfully. In brief, Durand-Ruel was the art dealer who put the Impressionists on the map - at a time when seemingly all the critics were thinking "Here be monsters". Over a working life of 40 years plus, he consistently encouraged (personally and financially) this new, unusual breed of artist despite coming perilously close to penury himself on a couple of occasions. Along the way, he essentially invented new ways of dealership and display (sponsoring artists, for example, rather than buying works one by one, then exhibiting them for sale en masse).

As a result, the current exhibition creates a genuine narrative by re-enacting some of his obsessions and innovations - such as focusing an entire exhibition around a single, living artist (then extremely unusual). A Monet room presents five of his 'poplar' series, gathered from London, Paris, Philadephia and Tokyo - recreating the experience contemporary viewers would have got on seeing some of Monet's great sequence works actually displayed together. It certainly helps to give you a truer, er, impression of what the painter was trying to achieve: for example, I had no idea before seeing these alongside each other that Monet was trying to capture variations in wind effect as well as light.

Exploiting the Durand-Ruel connection - seeking to show the pictures he showed - gives the National the perfect reason to bring us lesser-seen Monets living elsewhere: two of my favourites are below. I love the way all the shapes in 'Windmills and Boats near Zaandam' - the mills themselves, the sails, the oars and posts - are all distorted rectangles, echoing each other, followed by the near-abstract 'Road at La Cavee', such a restful picture, drawing your eye to the sea purely through geometric blocks meeting at a mid-point. 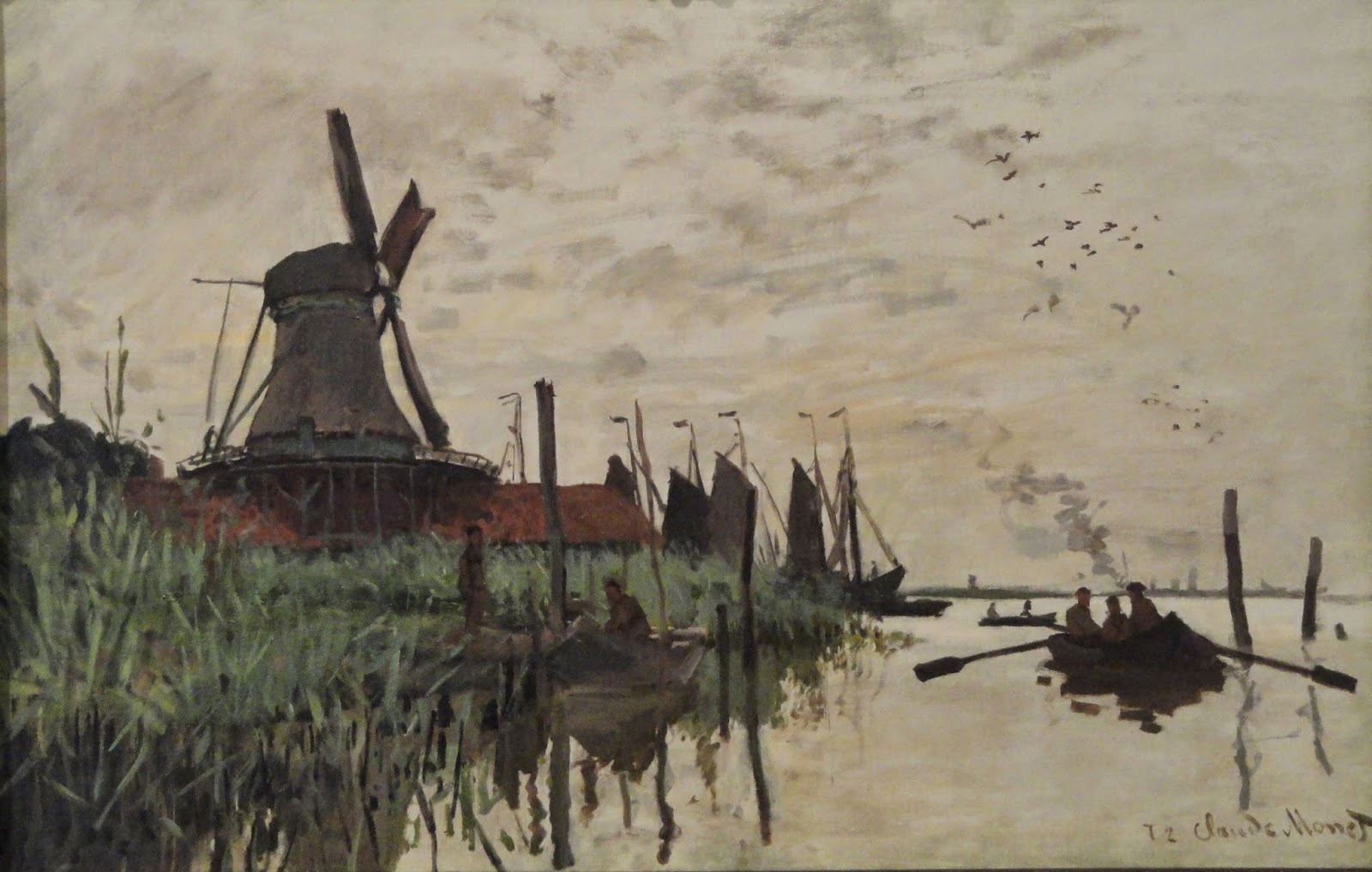 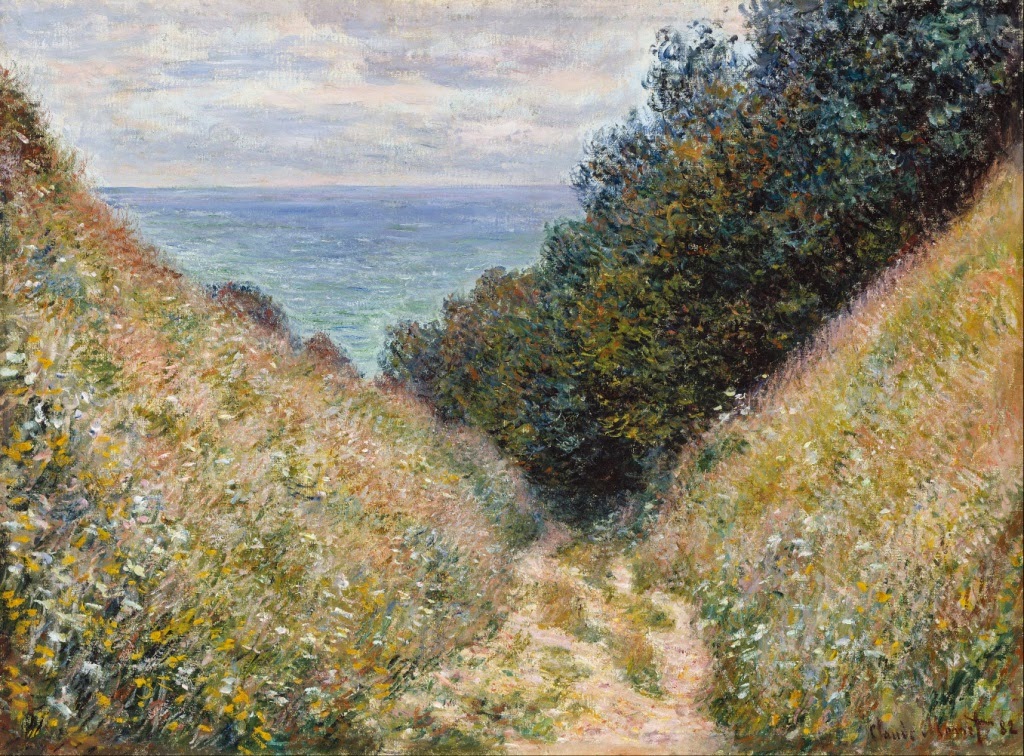 But Monet only forms part of the overall survey. Manet receives similar treatment, with an arresting selection of his pictures displayed as a set (D-R was so impressed he indulged in a spree). I adored this painting, 'The Reader'. How all the colours merge (brown wall, chair, coat) apart from the shining focus of his face. The weight of the book, spine pivoting on the desk. His right hand. 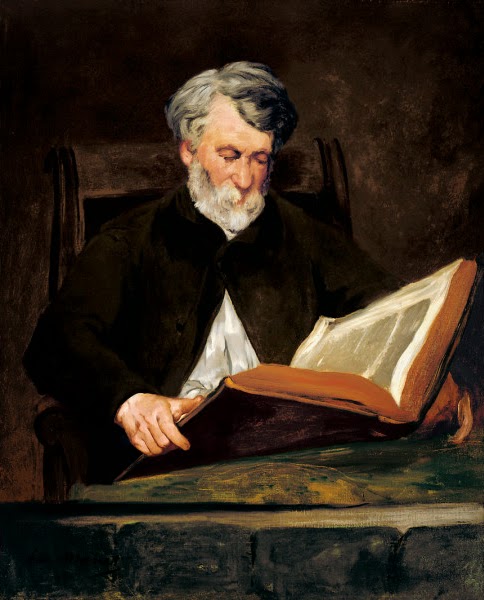 I could list highlights into infinity, but I'd suggest this marvellous Degas view of the ballet as seen from the opera house stalls is brilliantly ambiguous. Has the viewer lost interest in the action on stage (blurred) so is people-watching among his fellow punters and the orchestra? Or are we seeing the kind of giddy visual bustle where our viewpoint constantly wanders and indulges in slight distractions? 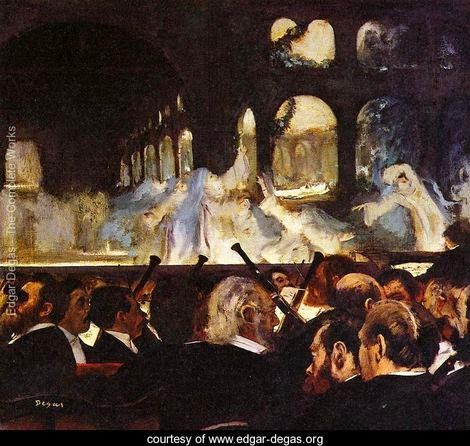 There are some beautiful Renoirs included. Renoir is described by the exhibition notes as the Impressionists' "most celebrated portraitist". When I first read this, I raised an eyebrow - Manet seemed to me more or less the only other artist represented who was really concerned with painting 'recognisable' people - but that's to take nothing away from the soft-focus accuracy of Renoir's superb eye for detail. (The pair of pictures 'Dance in the City' and 'Dance in the Country' are especially strong here, the physiques of the rustic couple slightly more robust and clothes a tad shabbier than their townie counterparts.)

I also felt that Sisley emerged as something close to my 'man of the match': I had not noticed before how his composition and use of natural lines to compartmentalise the canvas seemed to me almost photographic (from the hidden half of the canvas in 'The Ferry of the Ile de la Loge: Flood' to the panorama of horizontals and verticals in the 'View of the Thames'). 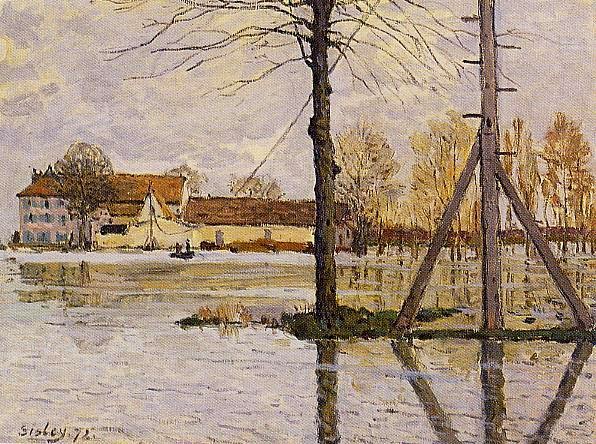 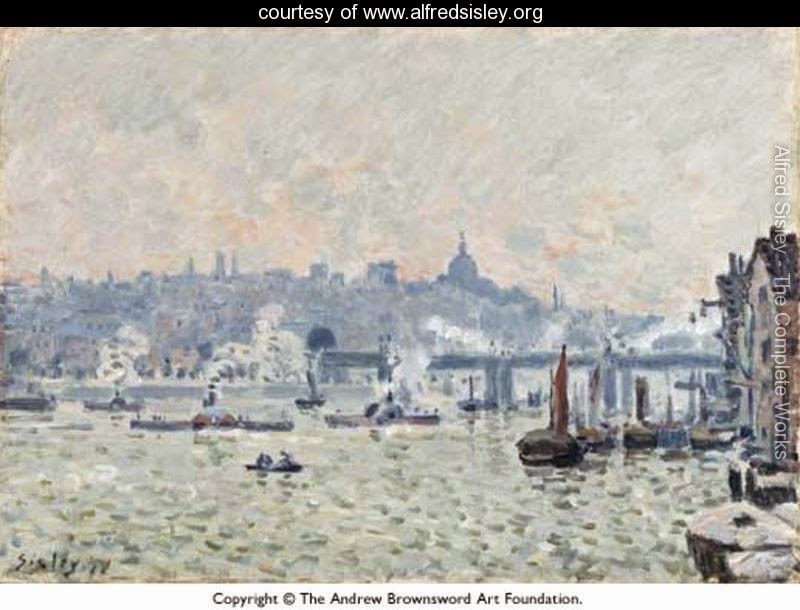 With a flourish, the final room pays tribute to Durand-Ruel's greatest achievement, the Grafton Galleries show where he displayed over 300 Impressionist works: multiple artists over multiple periods - again, a nudge forward for the skill of curating exhibitions with what must have felt like one of the first retrospectives of a movement. This exhibition follows ably in its footsteps: please get there if you can.

(Images taken from Wikipeida, unless the image labelling or watermark states othewise!)