Botanical art might be a familiar genre - in fact, I posted about some truly great examples only a short while ago. Botanical art song, however? Possibly under-explored - at least, until now.

Soprano Carolyn Sampson has teamed up with pianist Joseph Middleton for a new recital album, called 'Fleurs'. As the name suggests, every song featured is about or linked in some way to flowers. That said, the name doesn't quite prepare you for the dazzling variety of blooms on display: the title track is by Poulenc, and there is a French focus purely in terms of composers included: Boulanger, Chabrier, Debussy, Fauré, Gounod and Hahn (French by way of Venezuela).

Us plucky Brits keep our end up with Britten, Purcell and Quilter, and there are some deeper explorations into lieder thanks to Schumann, Strauss and, of course, Schubert.

CS is rightly renowned for her sublime baroque and early music performances, and the first real sign - I believe - that she was now up for something completely different was a stunning Wigmore Hall concert last year. She self-effacingly described it as her first 'grown-up' song recital - meaning classical song with just voice and piano - and perhaps it did feel like an experiment to her, a toe dipped in the water. But you would never have known. I remember feeling elated, privileged to be there, and in my round-up of my favourites last year, I remarked how disappointed I was not to see recording microphones above the stage.

Luckily, 'Fleurs' has arrived instead, and again, CS calls it a 'début' in the liner notes. As someone who has listened to pop, rock, jazz, folk etc for much of my life and got into classical music seriously within the last decade, I am still very 'artist-led' - so while I devour complete works or entire operas as greedily as anyone, I reserve a particular level of delight for when favourite singers or players put together a 'proper album'. 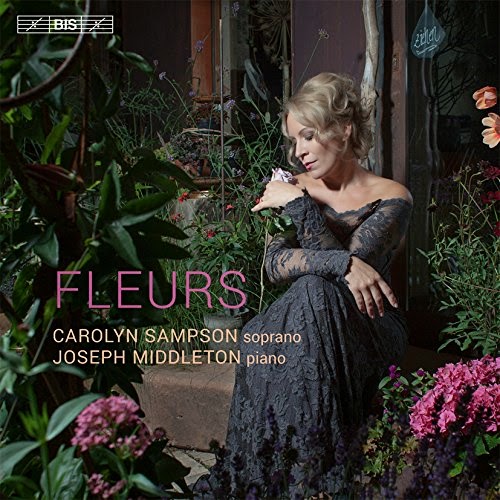 And 'Fleurs' is not just a proper album - it's a concept album, of course, its generous 70 minutes or so divided into four distinct sequences (it's like four sides of vinyl! - could this get any better?). And the overall sequencing works a treat - especially near the start of the album where a thread of real wit underlines the power: track 1 - 'Sweeter than roses' - is by Purcell, so seasoned Sampsonites are arguably placed immediately into the artist and listener 'comfort zone'. (In fact, it's a direct callback to her earlier Purcell disc, 'Victorious Love'.)

But the song is a great opening choice, as it seems to sum up the spirit of 'Fleurs' like an overture: gentle and stately at first, only to burst into ecstatic fervour around the two-and-a-half minute mark. You're reminded of all the things there are to love about CS's voice - the warm and generous tone, the supernatural precision of the diction and (many) notes, the way she seems to 'dance' over the accompaniment. And what accompaniment: JM - whose rapport with CS is audible - steers every moodswing and at one point is clearly 'rocking out' at the song's excited high.

Almost immediately, the duo delight in reminding us that, this time, all bets are off. Quilter's stately gentleness gives way to his fellow countryman Britten's 'The Nightingale and the Rose': the illusory lyric mirrored in the piano's irregular dissonance (JM scarily great here), with the vocal achieving a kind of agitated beauty as the accompanying 'safety net' fractures below it.

CS's inability to sing a less than gorgeous note works wonders in these high-octane moments - see also the way she glides over JM's stabbing turmoil in Fauré's 'Fleur jetée' or builds up to the, er, climax of Strauss's 'Monbluhmen' (*loosens collar*). And 'Fleurs' isn't afraid to smoulder, either: witness the volume-control intimacy of the final verse of Hahn's 'Offrande' or the middle verse of Schubert's 'Im Haine' where she emulates the breeze mentioned in the lyric by part-sighing the final line.

Even the production gives the record - in the best way - a seductive feel. There is no audience, but the ambience is anything but arid: you can hear the occasional pedal or breath and the experience is all the better for it. Use a decent pair of headphones and you're in the room with them; you get the impression that the pair are essentially performing for each other but, if you're good, they'll play just for you, too.

While the flower concept proves a brilliant device to include such a wide selection of songs, it leaves me with the nicest possible criticism: I want more. I hope this is the first of many recital albums. Including Debussy's 'De fleurs' makes me long to hear CS record all four 'Proses lyriques' ... and could the label let her loose in Schubert's vast catalogue, please..?

Until then, buy this CD and keep playing it. Rest assured, you will want to.

* * *
Concert-goers! Be advised that 'Fleurs' is on tour, as well. As I type, the duo are about to conquer a few places across the UK:

Take note that the London date is a 'rush-hour recital' and launch event organised by Rhinegold Live - so it is, in fact, free. You just need to follow the link, get in touch, and if there's still room they will e-mail you an invitation. So, make haste!

* * *
(A post-script on 'proper albums'. Song programming, of course, really lends itself to this. Other titles popping into my head include the great double album 'Between Life and Death' by Christoph Prégardien & Michael Gees, Gerald Finley's 'Ballad Singer' set with Julius Drake, Alice Coote's 'Power of Love' with Graham Johnson ... and most recently, Dorothea Röschmann's extraordinary 'Portraits' with Malcolm Martineau. For me, 'Fleurs' can stand proudly alongside these and all my other favourites. Outside song, I can also avidly recommend the recital albums of pianists Stephen Hough and Marc-Andre Hamelin on Hyperion - brilliant programmers both.)