This was always going to be a really special event for me - cellist and composer Jo Quail's launch concert for her new album, 'Caldera'. I had heard the album in advance (a little bit more about this later) and many fans, myself included, who make it regularly to Jo's performances - or rummage a bit on YouTube - have already encountered a good number of the tracks as she adjusts and develops them over time, using audience response as part of the writing and refining process.

Live and solo, Jo can reconstruct fully layered versions of most of her material armed with her cello and fearsome control panel of loop pedals. On this occasion, however, some of Jo's tracks were going out on the town in new clothes - and as a result, we saw and heard something unique and unforgettable: like the cauldron of the album's title, a true melting pot, part the sound of the new record, part Jo's normal show, and then a whole variety of extra ingredients to savour.

Everything about the way the programme was put together clicked. Jo still kept two of the 'Caldera' pieces completely to herself - 'Jhanoem the Witch' and 'Laurus'. These are particular favourites of mine because each track, in its own way, gives a brilliant snapshot of what she is capable of. 'Jhanoem' uses looping as a kind of 'enabler', allowing Jo to weave a swirling tune around gentle pizzicato patterns, marrying her incredible versatility on the cello to her gift for melody. Then 'Laurus' - a driving, exhilarating, joyous triumph of a track - brings the loop station to the fore as an instrument in its own right, Jo developing the song from a glitchy, chattering beat (back of bow on strings) through establishing the main hooks and then - layers of harmonies and riffs until the song is full, fit to burst, and implodes into silence in an instant. Watching Jo perform this live is always a highlight, the feet on the pedals even seeming to outrun the hands on the cello. Even without the heat of the venue and deep red lighting, 'Jhanoem' was at its most sultry and 'Laurus' fiery, incendiary.

Each half of the concert (the notional sides 1 and 2 of the album) came with an aperitif. The beautiful 'Vigil', a meditative piece Jo often opens with, began the evening. It's the perfect start - not solely because it helps Jo settle into the performance, but its stately progress also draws the audience in like an aural caress. The steady pace also means that anyone new to seeing Jo live has time to take in that thrilling first moment when the cello appears to keep playing without her (as the first loop takes effect) and she moves on to the next layer. Part 2 opened with a real surprise, as Jo played 'Hunter from the East', which can't be performed live without Ruban Byrne's haunting guitar part. This was a complete thrill because the tune (from previous album 'From the Sea') is aired so rarely, and yet the two of them, so in tune with each other, performed it with unhurried restraint and sensitivity. An unexpected treat. 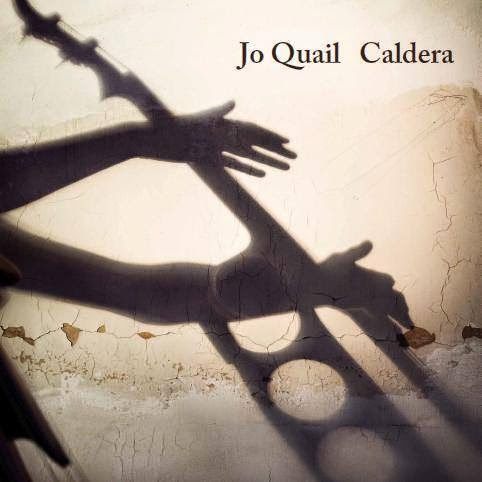 For the other 'Caldera' pieces, a crack team of musical collaborators assembled onstage in varying combinations. The guest singers and players on the album all appeared in person to help recreate their particular tracks: Evi Stergiou and Spyros Giasafakis from the brilliant Daemonia Nymphe (imagine musicians who might have accompanied ancient Greek drama resurrected and playing now - amazing stuff), and Lucie Dehli, a vocalist I'd never heard before 'Caldera', who sings with great intuition, purity and delicacy. And Jo's army of horn, string and percussion players sent pieces like set closer 'Adder Stone' into orbit: not a replacement for the dazzling solo arrangements we hear in Jo's normal sets, but complementary, a celebration - the electricity between the players bringing the scores crackling into life.

Possibly the most striking aspect of the evening was that it still found room to reflect the questing, experimental side to Jo's music. Jo had arranged the atmospheric track 'South West Night' for the ensemble but they hadn't rehearsed it. Undaunted, they still played it under Jo's direction - with the guests also improvising new vocal and wind parts - each deciding on the spot what their individual approach should be. Yet they were so 'in sync' as a group, and the piece itself so strong, that it all merged into a magical whole. We also heard a unique rendition of acoustic cello track 'The Hidden Forest', which, like most of Jo's work, is instrumental. However, Lucie Delhi (during her trip over from Belgium) was invited by Jo to contribute to a live version, and within a day or so had produced a totally sympathetic set of lyrics and melody for the performance.

I think this is why Jo's music genuinely deserves to be called inspirational. It brings out a creative response in others. Everyone on that stage wanted to animate and inhabit pieces that, most of the time, will normally have to be played solo. They all ventured - seemingly at top speed - outside anything vaguely resembling a comfort zone and both they and the audience reaped the rewards of their shared sense of adventure.

And I can vouch for this first hand, because the music always makes me want to write. I've seen Jo live a number of times now, and there hasn't been a single performance where I've not heard something new or thought of something different I want to describe or tell someone about. I board the train, not bothering with the iPod, because my head is still so full not only with the tunes, but with all the words and images the sounds have brought with them... to the point where I wish I had my own mental loop station so I could preserve the various thoughts and impressions in layers, on repeat, ready for me to record when I get home.

'Caldera', the album, is out now. If the show that launched it was stunning, ambitious and original - then rest assured the record that is all those things, and more. Take the music I've described above, and add an impressive production (by James Griffiths, with Jo) that gets the mix so right that it really is up to you, the listener, whether you immerse yourself in the overall sonic blend, or follow the lines and patterns through the tracks, hearing those new details every time. It's also worth mentioning the brilliant artwork by Karolina Urbaniak (as shown in the album cover above), whose shoreline and church interior portraits reflect the natural and spiritual qualities in Jo's music. Watch the video for 'Adder Stone' below, then follow this link to Jo's website to find out more about the album and, even better, feel moved to buy a copy. Make haste, and you could get a limited edition version with a DVD with two live performances and more atmospheric photographs by another of Jo's collaborators, Simon Kallas. (And it was a privilege to write the sleeve notes. How fortunate to be able to share more widely some of the thoughts the music brings. Jo: thank you.)