Well, these aren't the kind of 'mad scenes' I'd normally be expecting.

Rewind approximately a month, and you would have found me writing something that felt profoundly odd for me at the time - a reaction/comment-type piece about how important I think it is to respond positively and humanely to those in the arts. (And by the way, in itself, it was one of the most warmly-received and appreciated posts I've published - so thank you to everyone who enjoyed and shared it - in particular, the folk at The Rocking Vicar, who gave it a second life and audience.) I wondered if I'd return to the subject. Yes, it tuns out. Sooner than I thought.

I wrote the original post in response to what seemed, at the time, an extraordinary incident. To re-cap as briefly as possible - several opera reviewers, reviewing a particular production, all homed in on one female performer in particular and commented disparagingly on her looks and physique. Sexist journalism: hardly news. Snotty arts criticism: not unknown. But the lethal combination of the two - and the licence the writers felt, independently it seems, they had to make such remarks - ignited something dormant, and fans and performers fought fiercely back.

Never an artform to do things by halves, in the few weeks since, the opera world has completely, comprehensively kicked off. Across the pond, New York's Metropolitan Opera (the 'Met') has cancelled the global cinema broadcasts of its production of John Adams's 'The Death of Klinghoffer', apparently due to fears it could provoke anti-semitic thought (the opera covers the murder of a disabled Jewish passenger during the hijack of the liner Achille Lauro). And, switching hemispheres for a moment, Opera Australia has 'released' a soprano due to appear in one of its upcoming productions, for homophobic remarks she made on her Facebook page last year.

I assume this is all coincidence rather than some kind of, er, 'operademic', and that - sad to relate - all kinds of hate-fuelled 'isms' flourish in the media and on the net, all the time, that have nothing to do with opera at all. However, in these instances, opera seems to have done in real life what it usually does onstage: dramatise and amplify these extreme emotions and reactions.

Take the soprano. While she seems to have made evasions and denials, the post in question is hideously strong, and I don't suppose the company had any real choice over their eventual decision. I say 'eventual' because it looked for a time like they would keep her - until the reaction against her, which has now itself been called a witch-hunt, became overwhelming. The perplexing thing is surely that to publish such a post on Facebook would amount to career suicide, as soon as it came to light. Whatever her future holds, I think that she has done herself the most damage. It's very easy to believe that those abusing her in return are, also, much like their target, looking for somewhere, anywhere, to point all that directionless anger. 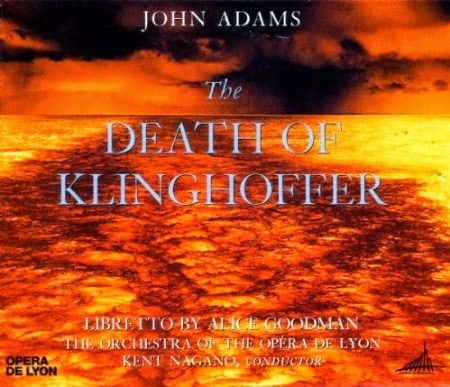 (Image of opera CD cover, taken from the Amazon entry.)

The Klinghoffer cancellation (hmm - sounds like an undiscovered Robert Ludlum novel) seems more thorny and obscure to me the more I think about it. The official line is that overseas broadcast of the opera may in some way contribute towards currently emerging anti-semitic feeling in Europe. Bear in mind - the staging of the opera at the Met is going ahead: the director has stated that he does not believe the opera is actually anti-semitic. Only the cinema relays have been abandoned, apparently as a compromise to the relevant pressure groups protesting against the work's subject matter.

Predictably, many responses to this news have revolved around the principles of artistic licence and free speech, which inevitably make the issues seem black and white. Either you can say it, or you can't. Frustratingly, I haven't seen much material attempting to place all of this in context (which - I hasten to add - does not mean it isn't out there). This is not straightforward.


And to add to that, the situation also highlights the possibilities of uncovering 'ism' within 'ism' within 'ism'. Should I detect racism in the implication that audiences on the spot will understand it but those of us outside the US are too dim to handle the nuances? Is there sexism - or even 'selective anti-semitism' - in the absence of any representation of whatever comment Alice Goodman might offer? She wrote the libretto, and was herself brought up a Jew.


I would not have necessarily predicted that I would be sitting here, typing, and thinking about enormous questions of human rights, through the prism of opera. It seems to me that all three situations here have something to do with that cliche - 'free speech'. A noble idea, so often bent and shaped into the conviction that anyone can say what they like.

Free speech is not an ideal term because it comes with a cost. People have paid up to and including the ultimate price so that we can have it. For it to work universally, we need to bear with the idea that along with the exchange of knowledge, ideas and respect, we will get prejudice and hate speech. Then we deal with that accordingly - not because we are intolerant and inflexible, but because we are intelligent and insightful. We need to spend time and effort making sure we use such a gift wisely.

To come full circle - it brought me down to read the editorial in the latest issue of a leading UK opera magazine, which leapt to the defence of the critics I referred to at the start. It repeated the insults - one in the heading of the leader. It made out the reviewers were being 'mild' in comparison to the ire they drew. It discussed bad costume, as though the woman receiving the slight should in some way take comfort from being somehow 'made' ridiculous. After a full page, it expressed the apparent hope the 'debate' would not be 'reignited'. And chiefly, it seemed, among its objections was that the critics' critics 'knew little about opera'. Ah well, then. No wonder. What can you expect from such rabble?

Of course, the editor can think these things, and has a right to say them. But he should have had the grace not to say them. Opera - like all art - is for everyone; those knowing a little less about it might have tried 'Klinghoffer' cheaply at the movies and had their musical and political brains fired into life; or gone to hear the opera that kickstarted all this and loved every note without a thought for historically appropriate bodyshape or costume. How much use is it to know everything about opera if you know so little about people?