It's very gratifying to find that a musician you've followed - with unchecked enthusiasm - for something like a decade can make a record that still feels like a total surprise, still sheds new light on their craft, and still comfortably qualifies for the description 'masterpiece'. So it proves with the new Sieben album, 'Each Divine Spark'.

For those yet to discover him: Matt Howden is a vocalist and violin player, who records albums of his own songs and performs live as Sieben. (He tends to put his real name to other types of project - more about those at the end.) Using a loop pedal, he builds his music as much as writes it, creating layers of sound - percussion, basslines, hooks, solos - with just the violin. Live, as you might imagine, this is as captivating to watch as well as hear, as he feeds the machinery with beats (sometimes lamping the side of the fiddle, or brushing it to give a scratching, shuffling sound like an alien shaker) and melodies until they swarm in the air around him as he sings.

While this might seem a restrictive set-up, the limitations seem to fuel Matt's creativity and propel him to mine variations on his approach with seemingly endless invention. Each record tends to be a reaction against the previous one - not necessarily trying to do 'the opposite', but always pushing in a different direction. Where 'Each Divine Spark' slightly bucks the trend is that to a longtime listener, it actually combines some of the most adventurous and magnetic elements of the previous records and even then, it adds something brand new to the template. Whereas if you come to this record never having heard a note of Sieben before - great news: it's the perfect entry point - dive in. 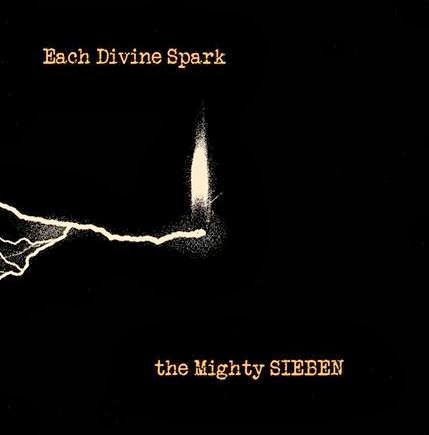 Most of the tracks begin with plucked notes that, as a rule, set a measured, restrained pace... before each one bursts into life with a different sonic manoeuvre. 'She is There' introduces a hyperactive, syncopated rhythm suggesting anxiety waiting to be calmed by the gliding vocals; 'The National Anthem of Somewhere' uses the notes to form the basis of the slinkiest of riffs; 'Jigsaw Chainsaw' distorts them into menacing fuzz; 'Written in Fire' surrounds them with pounding, whipcrack percussive hits. I could go on like this, just discussing the first 30 seconds of every song. The overall effect is to give the album, despite its impressive variety of tone, a sense of unity. Wherever one track leaves you, you are set back down at more or less the place you started, wondering where the next one will take you.

Something very special is also going on with the songwriting. Matt has now honed his lyrics to the point where each song is concise - a few of the tracks only need around four, six, eight lines - but rich in arresting poetic imagery that mixes the matter-of-fact with the magical. Doomed Hollywood icon Clara Bow sleeps "in a silver screen eiderdown", while 'Afterglow' speaks of rain as "the cold melody of pain". Words clash into new compound coinages: "smack-front", "dream-sift", "lift-melt". Perhaps the power in the words is one of the reasons why the vocals might well be the best Matt has ever recorded. Confident, close to the mic, here he seems to be putting his voice - always a persuasive, full-bodied thing - through its paces more than before, with the vocal lines covering a greater range and rising to the challenge every time. And as if not to be outdone, the looped violin lines are intricate, even playful - and sometimes there's a jazz/gypsy feel in the solos that seems new to me. It brilliantly offsets the stately rhythms and subtle intensity, even menace, present in some of the tracks. The whole record carries a kind of 'danger cabaret' feel - it doesn't ever quite attack, but - as befits an album of loops - it's coiled throughout, ready to spring.

Two tracks currently stand out for me at the moment (on my... er... nth listen). "A Firebug Nature" is one of the most patient tracks I've ever heard, with a minute's sparse beats leading to keening violin harmonies, and ultimately the voice literally soars above them, along a faster air-current of melody, like the "Icarus wings" it is singing about. Finally, the song fleshes out in layers, not on top, but underneath, as the beat doubles time with you barely noticing, and finally one of the jazzy riffs I was mentioning loops in ascending runs to the song's close. And "In This Place", featuring cellist Jo Quail (another favourite of mine, as anyone vaguely familiar with this blog will probably recall), is a brilliantly constructed mood piece which gently teases the listener's expectations. They duet beautifully in the early part of the song - then from around the two-minute mark the violin and cello begin a call-and-response section with a twist. Beneath the vocals, the violin begins a looped melody, while the cello appears to answer 'live' (the guest players added their parts later), dovetailing in with something different every time, making the track somehow feel both hypnotically repetitive and telepathically improvised. Then as the song develops, the violin breaks out of the repetition too and another gorgeous duet forms the outro. I've seen Matt and Jo perform together live (read more here), so I was already aware of their shared intuition or how 'in sync' they are musically - but that doesn't make it any less inspiring to hear it captured.

Finally, the album possesses a major secret weapon that I'd be remiss not to mention: the production. Recorded near-live in a unique underground Sheffield studio (I don't mean it's for obscure scenesters - it is literally under the ground), the acoustics are a perfect match for Matt's ambitions. We are used to albums giving us loud & soft, and left & right, but this music sounds '3D', with parts moving forward or receding, the voice up close, the percussion chattering around you, the violin layers placing you in the middle of a string ensemble. It's a perfect 'headphones' album. The sense of space is almost tangible (and I know that's a contradiction in terms) - listen in the dark, and you feel like you could reach out into the sound.


We're talking 'first among equals' here, but this is surely the best Sieben record so far. There is something really determined about it: not a word or note wasted; every song like a miniature expression of what Matt is capable of; precision-tooled to lock the looped arrangements together more intricately than ever, but confident enough to solo freely and still mess with the formula, all these albums in. Brave, brilliant work.

* * *
There are quite a few ways to buy 'Each Divine Spark'. You can find the digital version on iTunes, Amazon and so on, as usual, but then I would counsel that, whatever your sound quality preferences, you are missing out on some particularly fine artwork by Martin Bedford (like this) which feels very much part of the whole artistic enterprise. With that in mind, the best place to get the CD is the Sieben website (shop here). Dark Vinyl, as the name suggests, are doing a vinyl version, which can be pre-ordered here: I've linked you to the 'marbled vinyl' edition, which is slightly more limited than the black. Don't tarry, though - there's only 100 of the former and 150 of the latter. 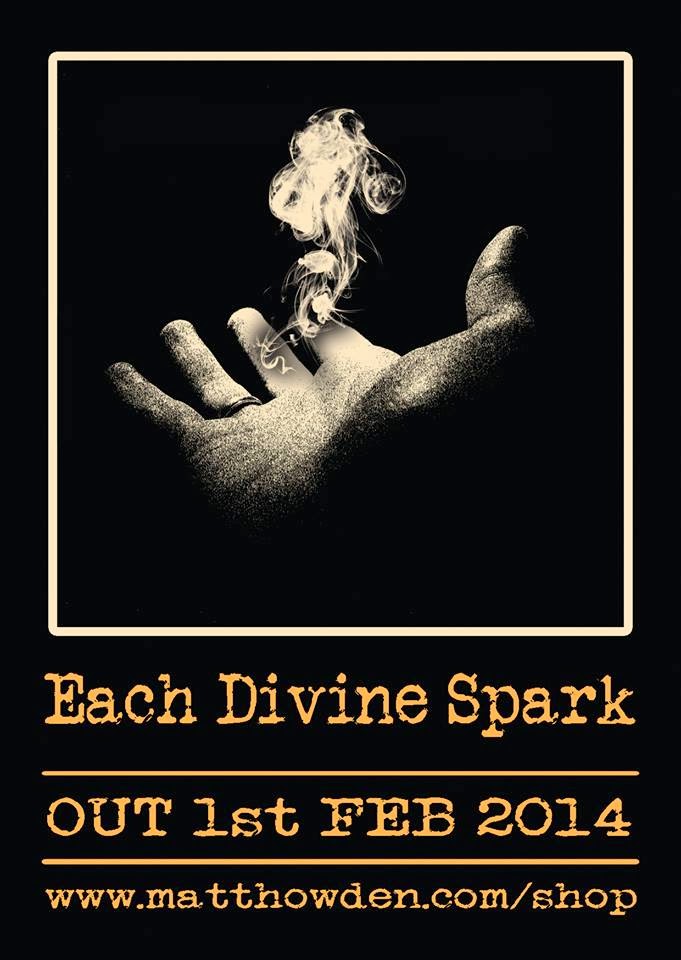 Where next?
You may notice on the Sieben website that there are quite a few other albums, and it's a rewarding back catalogue. I mentioned above that Matt generally takes each record in a different direction from the previous one, so the golden rule is to work backwards. 'No Less Than All', the previous record, is full of fantastic driving beats and ratchets up the intense and hyperactive side. Then, before that, 'Star Wood Brick Firmament' has slightly less full-on rhythms - more of a pulse, a groove - and is perhaps more achingly melodic. And so on. 'As They Should Sound' is a great retrospective with old Sieben tracks re-recorded in a more streamlined, restrained style, and will give you a good idea of where you might want to go next with the older stuff. And if you fancy trying some of his instrumental or soundtrack work, investigate the albums released under his own name... or the more industrial side project he has with Polish band Job Karma, called 7JK. In short: prepare to manage your addiction.