Here are some covers! 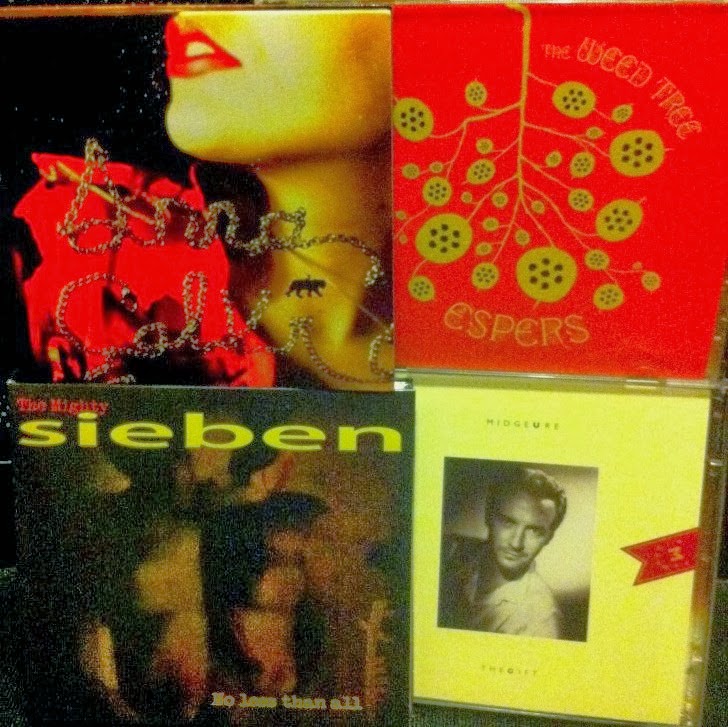 Inside those sleeves (-ish - and a few more besides) are the tracks I'm including in this blog entry. A bit of a transitional post, in fact, as I'm kicking off with the artist I wrote about last time, and I'm closing with the one I'm 99.9% sure I'll be featuring next.

This array of videos I've assembled here is a direct result of an idle evening when a song I hadn't listened to for ages - the fourth track below - popped into my head and wouldn't leave. As I was in the room with all the CDs and the laptop, I spent a happy if slightly frantic hour or two obsessing about cover versions in general, trawling YouTube and driving myself slightly hatstand. Why did Erasure drop the 7/4 (or 7/8??) time signature in 'Solsbury Hill' - couldn't their synth computer thing work it out? Which version of 'Our Lips are Sealed' do I really prefer? And so on.

I am drawn to cover versions for some reason. I don't mean I like them all, obviously, but I like the idea. However accustomed you become to any musician's signature writing style, or the atmosphere of their own material - if they suddenly choose a song to cover, the chances are you're going to learn something new about them. For example, here's Sieben (Sheffield singer and violinist Matt Howden - read about his marvellous new record here) - taking on Joy Division's 'Transmission'. There's a terrific studio version of this on Matt's previous album 'No Less Than All', but if you're new to his work, start with this footage of him performing it live. You'll see that everything is done with the violin and a loop station.


I suppose I'd always felt you basically do a cover in one of two ways - you 'enjoy yourself' and simply try and record a version that's very close to the original, or you make more of a radical artistic statement and turn the song into something that pretty much sounds like one of your own. At face value, Matt is doing the latter here by conjuring up 'Transmission' with just fiddle and voice - that's the Sieben M.O.

But I also noticed how Matt's looping technique seems to do two things at once: like the original, it allows the song to build, even though there's only one of him. But the fact that he can loop it at all highlights the song's underlying precision and structure, whereas I associate the original - where the guitar and bass seem to change all the time - almost with blind panic. It struck me that there might be a third kind of cover version where the new approach 'unlocks' something that's always been there and makes you hear it properly, as if for the first time.

So, with THAT - time to rattle on. I admire the way this reggae covers band, Easy Star All-Stars, tackle entire albums at a time, even if I think it sometimes puts people off unnecessary because it feels so 'novelty'. Home in on their version of Radiohead's 'Airbag', though, and suddenly that nightmare of distorted guitar slots so neatly into a dub echo that you may need a second listen before you fully take in Horace Andy's sublime vocal.


Espers - the remarkable 'freak folk' act - must have gravitated towards Blue Oyster Cult because of the hidden, spooked terror, which they draw out in their trademark, distorted acoustic style.


For all that, I'm very attracted to the thought that someone can examine a Jethro Tull track and decide it's not prog ENOUGH. The original 'Living in the Past' is rather airy, and over in about three minutes. Midge Ure adds one of those massive, chunky 80s beats (it was the 80s, so understandable), and a completely new, grindingly addictive outro. It even has Level 42's Mark King on bass, who plays like he's just been released into society, but he still doesn't upset the track - in fact, it just sounds like he's casually soloing, while everyone else sticks rigidly to formula. And it keeps the original's funny time signature, Erasure, so think on.


Two in one go here, when I think the artists performing the covers discovered new things about themselves. Emmylou Harris, courtesy of her work on the gorgeous 'Wrecking Ball' album with Daniel Lanois, found a liking for atmospheric groove some distance away from her (still beautiful) 'straight' country records. To that end, she formed a rock band, Spyboy, to tour the album and this is how a song by the McGarrigle sisters turned out. Some years later, T-Bone Burnett created a similar ambience for the Robert Plant & Alison Krauss album 'Raising Sand' - which all parties concerned seemed to agree they're unable to repeat. Krauss may be in the Emmylou role, but Plant is the revelation, delivering performances of such calm stateliness that in a way I'm almost grateful that at least his hair is still rebelling against the system. (If you track down the original of 'Killing the Blues' by Rowland Salley, you'll notice that Plant could easily have followed the writer's lead and let rip with the vocal. He just doesn't.)

Back to precision. Nick Drake's 'Cello Song' clearly involves an immediate, key decision for anyone thinking about covering it, but fortunately one of The Books (now sadly defunct, it seems) is a cellist. Nice vocal by cover version colossus Jose Gonzalez, too. But for me, the clincher is the how the track pays tribute to Drake's supernaturally perfect finger-picking... by processing the guitar sound, somehow implying there's a machine-like, robotic element to the pattern. I love the slight subversiveness of that, given how acoustic/authentic we feel the original to be. I'm not a great lover of the term 'folktronica' but I think it genuinely fits here, because the artists learned the song from another.


This is one of my favourite videos of all time. Anna Calvi's whole approach is obviously a marriage of indelible image (the male flamenco outfits in bright red and black), roof-elevating vocals from such a small frame, and virtuoso electric guitar. In this early cover, there's no colour and no voice; everything but the last element is stripped away. And to deprive a Leonard Cohen song of its lyrics is a brave way to unearth the complex melodies he sometimes buries.


More Cohen to finish. In jazz, covers occupy such a different place from rock, and interpretation of - or improvisation on - familiar tunes are often central to the enterprise. Barb Jungr, I believe, is one of the finest interpretative singers around today. The bands she assembles around her are always immaculate, but it's ultimately all about the voice. Specialising in songs that began life with a male vocal (her album 'The Men I Love' is subtitled the New American Songbook and has her performing songs by, among others, David Byrne, Paul Simon and Bruce Springsteen), she has a particular affinity with Bob Dylan and the forthcoming album 'Hard Rain' is a selection of Dylan and Cohen tracks. There is nothing 'masculine' about her voice - I think it's more to do with the sometimes bruised, sometimes belligerent determination in the tracks chosen - they are a great match for her measured delivery and fearsomely precise diction. I'd go as far as to say that she communicates equality and strength as she makes these songs her own. This preview clip is Cohen's 'Who by Fire'. I'm seeing her live (again) this weekend, performing this record, and I'll report back.