In my previous post, rounding up some cover versions I've been obsessing over, I ended with Barb Jungr's version of Leonard Cohen's 'Who by Fire', and mentioned I was about to go and see her in concert. That gig was a few nights ago now, and I'm still reeling.

If you look for Barb Jungr's CDs in a record shop (after successfully looking for a record shop, obviously), you'll normally find them in the jazz section. That's probably the closest genre match for what she does, but to be honest it only hints at a fraction of her scope. While a superb songwriter (the tracks on her previous album 'Stockport to Memphis', co-written with Simon Wallace, are complete stand-outs - seek out the title track and 'Urban Fox'), it's perhaps her ability to get under the skin of other people's songs and fully inhabit them that makes her truly remarkable. Particularly songs written and performed by men.

Again, regular readers of the blog (thank you, darlings, thank you) may recall from last time that I speculated about this a bit. The men we're discussing are not, for the most part, the dim and distant figures of Cole Porter or Irving Berlin. They're David Byrne, Neil Young, Bruce Springsteen or Tom Waits. And for this gig and latest record, Leonard Cohen and Bob Dylan. I think when functioning at their best, these blokes all find a sort of meeting point between steel and sensitivity, and that's the space Barb Jungr also occupies. I listen to her genuinely taking ownership of these tunes (without assuming any kind of masculinity or androgyny, by the way) and their lyrics in particular, as if unleashing something the men could only get some of the way towards expressing.

Cohen and Dylan - particularly the latter, with a full album ('Every Grain of Sand') and follow-up compilation  ('Man in the Long Black Coat') to himself already - have featured in the Barb catalogue before. However, as she explains from the stage, the new album 'Hard Rain' has a concept running through it; it assembles tracks from both BD and LC (who get roughly half the album each - and it's also worth pointing out that three of the LC tracks are co-writes with musical collaborator Sharon Robinson) that deal with protest and politics. 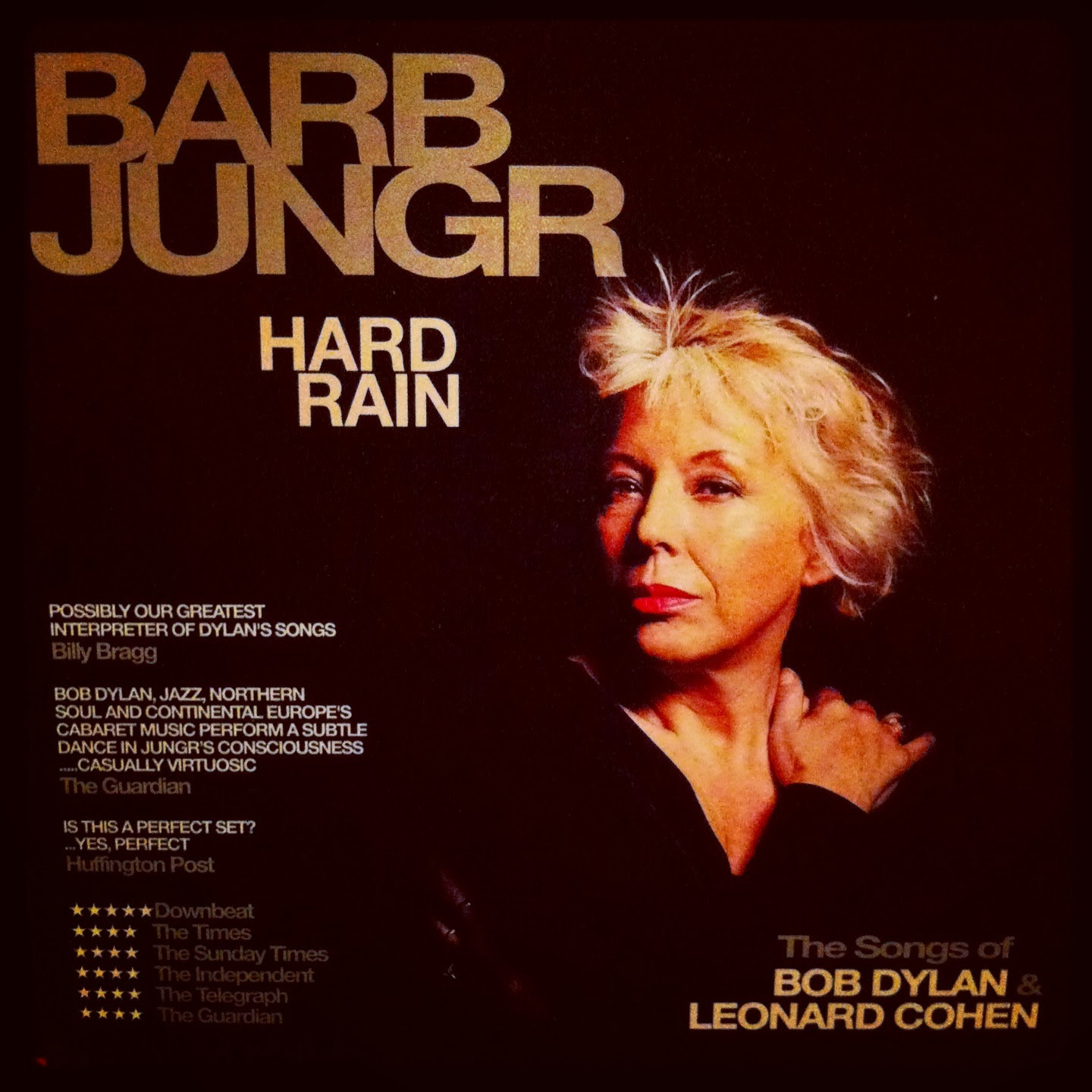 It's tempting to think of Cohen and Dylan in terms of their likenesses - their 'acquired taste' voices, their reputation as poets (or, to some, would-be poets). But to hear the same, chamber-jazz band (only piano and double bass behind the voice) devote an evening to just the two of them actually enhances their differences, certainly lyrically - Dylan's savage bitterness with Cohen's dark humour - and partly musically, too. Overall, I got the impression that Dylan rocks where Cohen swings - but that's not to say the show doesn't keep you guessing, with a roof-destroying rendition of 'The Future', and an amused lilt for 'Things Have Changed'.

The most brilliant effect of the arrangements is to provide an appropriately stark setting for such stark subject matter. Barb lightens the mood between tracks with effortless witty introductions and anecdotes, and acknowledges head on that it might have been a strange decision on her part to bring a group of songs like this together. But, in fact - it's a stroke of complete genius. The jazz/cabaret instrumentation might prepare you for lush, soothing music, or a night of chanson, and to bring lyrics from the folk/rock world of searing anger and precision satire into that soundworld makes each performance newly surprising, shocking and even cathartic.

I'll pick two songs for special mention, both (coincidentally) by Dylan. Against a rolling piano figure, Barb again suggested that they were about to embark on something slightly foolhardy, and began to sing 'Blowin' in the Wind'. They then spent the next four minutes or so rescuing the track from over-familiarity. One of those songs where people actually know less of the lyric than they think they do, Barb's crystal-clear vocal focuses the listener on every word, and real credit and an endless supply of drinks have to go to Simon Wallace for his piano arrangement, which - unlike the original - actually suggests recurring, self-perpetuating, almost wistful breeze, the cycle of us never learning.

And maybe the most stunning, most chilling performance of the evening arrived with 'Masters of War'. Slowed to a near standstill, this was beautifully sung but with real agony - the ruthless lyric thankfully intact. As I touched on before, hearing these words in a woman's voice - particularly one so accurate, with such clear diction, yet so emotionally varied and moving - made it impossible not to think of the mother/wife/girlfriend view of the needless sacrifice of so many young men. Something Dylan might have considered, but could never have felt.

If you can see this programme live, go. Hear these impeccable arrangements for the first time on stage - the experience will take you by the scruff of the neck and shake you up, but you will leave utterly elated. Then buy the disc at the shows - support the artists directly, it's self-released. That said - if you can't get to a gig, buy the CD anyway. It's like discovering a treasure map in a familiar location, leading you to whatever gold you've yet to find there.