Two rather full-on concerts to tell you about. The first was at the Royal Festival Hall (largest performance space in London's South Bank Centre) to celebrate the 200th anniversary of composer Richard Wagner's birth.

Rejoicing in the title 'Wagner Anniversary Concert' (suspect that was quite a short meeting), the programme seemed to be a bit of a greatest hits set, divided into three parts: the overture of one of Wagner's most accessible operas, 'Die Meistersinger von Nurnberg'; the opening and closing sections of 'Tristan and Isolde', commonly (as I found out) extracted and joined together for performance in concert; and Act III of 'Die Walkure', the second opera in the Ring cycle and, importantly, the bit that kicks off with 'Ride of the Valkyries'. (All together now, 'dur-nur-nur-nuuuuur-nur...')

Mrs Specs and I were accompanied by [*applause on entrance of much-loved recurring character*] David, our Proms pal and classical music oracle. David has been particularly patient with me lately as I'm on a bit of a Wagner crash course. This coming summer, it's basically Wagnerama at the Proms and, with Mrs Specs being far too sensible to even consider this, David and I have bought 7-day season tickets to 'Prom' - that is, go along and stand rather than book a seat in advance - at performances of all four Ring operas inside a week. (This led to David sending me the memorable text that he was "Looking forward to tackling the Ring with me up in the Gallery". I'm a married man, etc.)

So - David saw this anniversary night as a 'warm-up' - a chance to dip my toes into Wagnerian waters before total immersion come late July. And weirdly, that really is what it felt like. Apparently Wagner took a lot of persuading before allowing any of his work to be chopped up into bitesize pieces for performance, and I can hear why. When the Meistersinger overture stopped, I just wanted it to carry on. Hearing the two ends of Tristan only made me want to hear the whole thing. And even a full 70 mins of the Valkyrie third act made me slightly cross I hadn't got to hear the first 150 or so.

Initial reaction: I know that some people are put off Wagner because of an impression of immensity or weight, but I wonder if this is more a matter of length, or scale. While these pieces tonight were extracts, I found the music to be surprisingly light on its feet, and certainly inviting. The overture was dizzyingly varied and inventive (David in 'insider' mode was explaining to me how hard orchestras tackling the piece have to rehearse the 'joins' between the sections to achieve the necessary 'zip'). And the action at the end of 'Die Walkure' is resolutely small scale. Often quiet and seriously intimate (after the initial burst of action, it's essentially a two-hander between Wotan, king of the gods, and his soon-to-be-estranged daughter Brunnhilde), it plays out as an almost domestic tragedy - ok, with shields, helmets and an all-encompassing circle of fire, but you get my drift - with moving performances from the two soloists prompting an heartfelt and appreciative response from the audience.

(An aside: I'm not ignoring or dismissing Wagner's 'dark side' and the difficulties that may or may not present for enjoying his music. I suspect, though, that when I'm blogging - possibly an emotional and exhausted shell of a man - during the Proms, there'll be more sense, room and context to discuss it then.)

Anyway, Wagner might have thought he was re-defining the epic, but had he seen Rush in concert? I THINK NOT. Rush do have a break mid-set - presumably for oxygen and stamina-enhancing elixirs - but overall we're talking a three-hour gig and it FLEW by (night).

I genuinely don't think there's another band quite like Rush. Following a debut album of relatively straightforward blues rock, the current trio were in place by record number 2 - released in 1975. Incoming drummer Neil Peart (still affectionately called the 'new boy' by bassist/vocalist Geddy Lee and guitarist Alex Lifeson) was of a literary, intellectual bent and, taking over the lyrics, helped send them off more or less into their own genre. (Sample song title from the debut: 'Need Some Love'. Sample song title from the follow-up: 'By-Tor and the Snow Dog: III - Of the Battle, a. Challenge and Defiance'.)

They write lengthy and involved songs without lapsing into abstract proggery (whatever the lyrical excesses, the music is pin-sharp); they rock very, very hard without becoming truly metallic; and on top of that, they have the unpredictable melodies and chords - and scary technical precision - you might find in jazz or fusion. In fact, their virtuosity has become something of a calling card. One of the most dazzling aspects of a Rush concert is that (normally - see below...) whatever complex wizardry you can hear, it's being made by just the three of them, live. I checked Wikipedia for a bit of background and I was relieved to discover that they are, at least, only human: they use triggers and samples, which allow them to get somewhere near to the sound of the records, but can control these in 'real time' without having to use backing tracks. Alex and Neil are astonishingly talented, but in a band of three geniuses, it's Geddy's multi-tasking that really drops the jaw: he plays either bass or keyboards with his hands, uses his feet to operate the synth pedals, and then sings on top. I can't understand why he doesn't have to be led off-stage, a gibbering wreck, by the end of each evening. (Hang on. Maybe he does.) 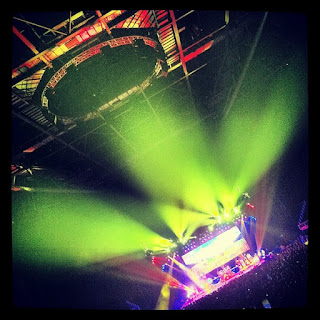 This is the third time I've seen Rush. In some respects, it's business as usual at the O2. They only play large arenas so they make sure the visuals are spectacular. Neil does a deranged drum solo that the punters lap up (instead of prompting the undignified sight of hordes of grown adults flinging each other out of the way to reach the bar). Also, their back catalogue is now so large that every tour it's as if they've walked into a room at Rush Mansions and tripped over an old neglected LP, with the cry "why don't we do a few off THAT one?" This year the 'Power Windows' and 'Roll the Bones' albums get the VIP treatment - clever, because those synth-heavy tracks are a good balance for the new stuff from 'Clockwork Angels', the brilliant new record. Not only do these songs provide some full-on guitar mayhem - \m/ - but Rush have a genuine, surprise masterstroke up their sleeves as a seven-strong string ensemble appears - in an explosion, obviously - to enrich the noise even further. They play like maniacs, the video screens showing enormous grins on their faces as they're let loose on some old Rush classics, like 'YYZ', as well as the new songs.

They encore with a slimmed-down version of '2112', their side-long SF epic about a totalitarian order suppressing the masses by controlling all forms of culture, including music. Reminded me of Wagner for some reason...