Terakaft are one of my all time favourite bands. In a way, this makes them rather difficult to write about. It's very tempting to just attempt the blog equivalent of placing my hands on your shoulders, looking you in the eyes and solemnly stating, "They are incredible. Go and buy everything they've done."

However, I think they are so good that I was originally planning to write a post about them just to get it off my chest and hopefully introduce them to a few more people. There was no sign of them playing live over here and they were quietly releasing brilliant albums to seemingly little fanfare. I would see other bands from Mali I also love, like Tinariwen (Terakaft began life as two Tinariwen blokes leaving to form their own band) and Bassekou Kouyate's Ngoni Ba, have their moments in the sun - or what passes for it in the UK - with gigs at Koko or the Barbican, but no sign of my personal heroes.

Until now. When my friend Maryam e-mailed me the news that Terakaft had a few UK gigs, it did cross my mind that she was winding me up. Then I thought that she might have just keyed in the wrong band - there's also Tamikrest, Toumast and Tartit, after all. But no, it was definitely Terakaft. 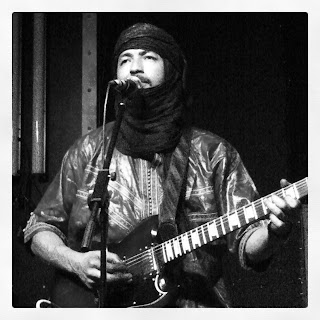 But then - apart from reminding myself that Maryam was, of course, extremely trustworthy and efficient, and not the typographic jackanapes I seemingly imagined she was being - the story did seem to be falling into place. Creatively, the band are on a roll: two really majestic albums in quick succession on the World Village label testify to that. 'Aratan N Azawad' from 2011 recently made Songlines magazine's 'Top 25 Mali Albums' list (at a mere no.23? Get a grip, Songlines) and the latest release 'Kel Tamasheq' (2012) is equally captivating.

And now we had an Actual Gig. Brilliantly, this was at Electrowerkz. If you've read my post about a recent dark folk gig at the same venue, you may recall my mentioning the, er, 'Spartan' feel of the place. It would be easy to imagine the nomadic band (the word 'terakaft' means 'caravan') camping in the desert with tents offering more luxurious facilities. 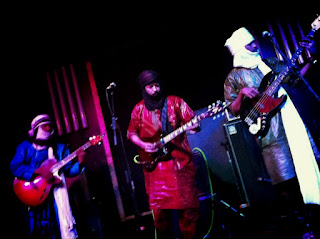 But none of that mattered. Yes, Electrowerkz is tiny but the stage is high up so sightlines are good. Also, free of the South Bank or the Barbican's ultra-respectful atmospheres, we had a chance to really MOVE to this music. I don't think anyone in that room was still - it would have been impossible (especially if, like me, you had over-affectionate couple Ms Elbows and Mr Shoulders on your immediate right, leading me to build 'limb dodging' into my limited repertoire of dance moves).

Why do I love Terakaft in particular so much? Well - if you know and like Tinariwen, you can probably call to mind the way their guitars launch into action, a phenomenal wall of rhythmic sound that locks you in whether that particular track has a blues or funk feel. Terakaft are much sparser but equally powerful, and that is what I like. They do as much with the space as with the noise. They can achieve a 'desert blues' mournful intensity, while at the same time they are nimble enough to hit a groove of such sprightly delicacy that you bob up and down in your own space, grinning, not wanting it to end. On some of their tracks you can hear traces of reggae or surf, just hints of sting or bounce for the sinewy guitars to wrap themselves round. Untiring, the band pumped the room full of energy for around 1hr 45mins.

I had waited some years for this gig. It should say something that it was even better than I expected, rather than failing to live up to the gig in my head. On the way out, Maryam said, 'That must have been good - you were dancing. You never dance.' I think I replied, '*wheeze, cough, pant*'.

They are incredible. Go and buy everything they've done.

A couple of mentions. If you like this music, you should definitely visit Maryam's YouTube channel for sundry delights,  including this track from the London gig:


And if you are interested in the current state of affairs in Mali and how it affects its musicians, you should start reading the work of Andy Morgan. I've mentioned his great website, Andy Morgan Writes, before but it's particularly pertinent now as he has published an analysis of the crisis called 'Music, Culture & Conflict in Mali'. You can find details here: http://www.andymorganwrites.com/new-book-music-culture-conflict-in-mali/
Posted by Adrian at 14:48