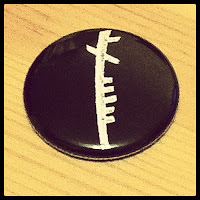 [Above: the 'ogham' symbol that forms the Sieben logo. It represents (to quote the mighty Sieben himself, Matt Howden: Quert, Muin and Huarth, the letters Q, M, and H, and the trees Apple, Vine, and Hawthorn. Matt has a tattoo of this on his arm. I, being a coward, have a badge.]

The publicity for the gig was pretty insistent - 'get there on time'. Doors around 7pm, first band around 7.15. Electrowerkz at the Angel, Islington was clearly a tightly-run ship, by God. Be punctual unless you fear missing the first note.

And that was a genuine risk. The evening overall was a mini-festival of sorts, packing in a top-flight line-up of five 'dark folk' bands and artists. (By the way, I prefer this way of describing the genre to, say, a buzzword like neo-folk, because I think it diminishes these musicians to call them a new, updated version of something. The best of them are true originals. Dark folk works for me: it sums up the slightly occult nature of the music - not simply that it sometimes uses pagan/pastoral subject matter, or flirts with the eerie and the gothic. It's also that you have to go looking for this music - and once you've found it, it draws you in and that's it.)

You'd have had to take my word for it, though, standing outside what is basically a kind of impressive shack in broad daylight. I fell in love with Electrowerkz, to be honest. Who couldn't find room in their heart for a 'Do not break the windows' sign next to a row of unfailingly broken windows? Or - not that I want to suggest this was a low-key gig - the way one of the band members came out to apologise for not letting us in the venue yet; they were having trouble with "the amp". We were all pleased to find once we got inside that there was more than one amp, although sadly the rogue piece of kit caused trouble for one of the bands later on.

Still, I only want to feature two of the acts on the bill - namely, the ones I really, properly love. First of all, Sieben - aka Sheffield violin genius Matt Howden. (For those of you that know me in real life - yes, all right, sorry, I have probably told you about this guy before. Possibly about 43 times.)

Matt builds his songs up, alone on stage, using only his fiddle and loop pedals. While he's not the only musician to play live in this way, he's a unique performer with a bewildering array of, er, strings to his bow. For a start, he has a completely unrestricted idea of what he can make a violin do. Before your eyes and ears, he will layer a few melody lines (including 'bouncing' down a bass part, and plucking as well as bowing the strings), then add beats by tapping - and, on occasion, pretty much lamping - the body of the instrument. Earning the epithet 'the Hendrix of the fiddle' in a more literal way than you might expect, he may also rub the stubble on his chin against the edge of the violin to create a jittery hi-hat effect - although judging by this latest performance, he has toned that down slightly after finding a way to create the same effect with his hand.

Nonetheless, he remains a consummate showman - which is why I felt it was important to include a live video in this blog entry. Seemingly wired to the earth through the fiddle and pedals, he is never still - prowling the stage while he layers the tunes and rhythms, recharging his batteries during the vocals by pumping his bow arm up and down, then eventually - spectacularly - he seems to cross a kind of ecstatic tipping point and whirls his bow around above his head. (I've often wondered how he actually learned to do this. How would you practise it and avoid the bow describing a perfect arc across the room? I have visions of a teenage Matt's home being a bit like a Sheffield Bayeux Tapestry - friends and family staggering around the house with bows sticking out of their heads, necks, rear ends.... "AAAUUGHH!" "Sorry, mum." Etc.) Finally, you might get the 'solo', for want of a better word. With the other layers motoring away underneath, by themselves, he gets a chance to display his virtuosity and invention.

This wouldn't all work, of course, if he wasn't a great songwriter as well. Luckily, he is. Not afraid to wrestle with a concept, he treats every album more or less as a clean slate and focuses on new subject matter and lyrical themes as well as continually refining the way he puts the tracks together. We heard brand new songs in this performance that took a sidestep away from the highly rhythmic approach of last CD "No Less Than All" into more ethereal territory, beautifully and confidently sung with the fiddle providing a kind of stately and serene pool of sound buoying up the vocal line. This video is not from the Electrowerkz night - and the tune featured is now a good few years old - but I think it's a spellbinding performance, skilfully filmed (love the shadow) and gives you a really good feel for Matt's energy and skill.


Also completely owning the Electrowerkz stage were Naevus. (It means 'birthmark' - thanks, Wikipedia!) You can tell from the way I've raved above that I've been living with - and loving - Sieben's music for a long time. I don't think I'll be able to speechify about Naevus to quite the same extent, because I'd only come across some of their stuff relatively recently. It was enough, though, to give me a really good feeling about seeing them live.

I can see that if they belong anywhere, it's in 'dark folk' - arresting and visceral lyrics, strong awareness of atmosphere, chord sequences of hypnotic power. Brilliantly, though, they overlay this with touches of punk and even grind - on the evidence of this performance, that would mean the thunderous drumming and an electric guitarist playing like he'd fallen into the magic potion as a child. It was as if a band like Killing Joke or Swans had accidentally got into some of the more spooky folk acts like Trees or Mr Fox and given their sound a substantial kicking. This gave the performance real tension, in the best sense; the pull of lead singer and songwriter Lloyd James's intriguing words and insistent melodies, against the push - the controlled aggression - of the rest of the band, barely kept on the leash.

The clip attached is of a song Naevus didn't perform on the night. However, in a way I think that's even more of a recommendation - as, still on a gig high, what I immediately did on getting home was stay up into the small hours hunting down any clips I could find of other Naevus tracks and ordering a couple of their CDs. Listen to this song for a masterclass in how to build up an epic, involving sound without any hint of bombast or excess. A marvellous group.


Find Sieben here.
Find Naevus here.
Both bands are also on Facebook.
Posted by Adrian at 15:24