At a time when the outside world desperately needs to recognise the importance of the arts, it’s fitting to see an entire exhibition of art on a mission to engage directly with the outside world.

‘Among the Trees’ includes pieces from 37 artists (based worldwide), working in a range of media: as we wander through the gallery’s twisty one-way path, we’re treated to painting, drawing, photography, video installation and sculpture. One or more trees feature in every work – no surprise there: as the gallery guide tells us, these are “artworks that ask us to think about trees and forests in different ways”. 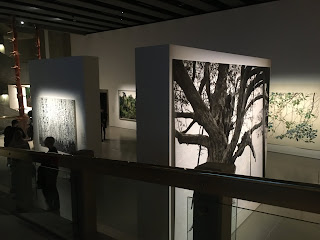 How do we think about trees and forests? And why are they such constant features in our art, our consciousness even? I would guess that it’s something more than their innate beauty – in an increasingly volatile natural world, a love of trees is one of the ways we grasp at permanence. (Even mountains – those other, literal rocks of our imagination – no longer seem as immutable, immortal, as climate change attacks their snowcaps and glaciers.) No-one is claiming that trees are immune to these ravages – far from it – but they outlive and survive us, while showing us frequent revival, regeneration and resilience.

This symbolic quality, I feel, is what makes this very much a ‘Hayward’ exhibition – whereas you might expect a show devoted to trees to appear at a museum or botanical garden. The trees provide the ongoing motif around which we weave our attitudes, behaviour, history and politics. Inevitably, the impact of our resulting actions often turns them into our real-world victims, even accomplices. We’re in the (wooden) frame here – this isn’t ‘about’ the trees, after all, but us ‘among’ them. 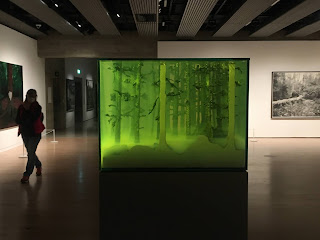 I found Sally Mann’s photography almost unbearably evocative: using only technology that would have been available at the time, she has created images of Deep South locations that don’t flinch from the macabre associations of the trees they feature. While the blurred elements might speak to our wish that these impulses belong in the past, the tree itself – potentially weaponised – is in sharp, unforgiving focus. Nearby, the message is underlined by a photograph of a ‘lynching tree’, taken by the director Steve McQueen, while he was filming ’12 Years a Slave’ in Louisiana.

The starkness of this picture highlights the way the exhibition sometimes sits between art and reportage, some of the artists using their particular modes of expression to make us ‘re-see’ what is right there in front of us. Jeff Wall provides a signature massive photograph called ‘Daybreak’: beneath an empty sky occupying more or less the top half of the image, Bedouin olive pickers sleep next to the olive grove where they work. At first glance, Wall’s composition gives us descending lines of shapes hugging the ground: the low canopy of the trees, the sleeping figures, the rocks and stones. But on the horizon, the flat roof of a huge Israeli prison is visible: Wall tells us he was interested in the contrast between the Bedouin, free to sleep in the open air, and the inmates confined to their cells. The trees seem to provide a barrier between the workers and the prison: it is easy to infer that, to these people, the grove is nourishment, protection, a lifeline. Yto Barrada’s acutely observant photography uses the ability of trees to persist in growing under difficult conditions to highlight the surrounding scenes of urban monotony or decay.

By contrast, Johanna Calle creates a wholly unnatural image, with ‘Perímetros (Nogal Andino)’: a silhouette of an Andean walnut tree. Closer inspection reveals that the dark expanse is in fact a typed transcript. The wording comes from Colombia’s Law of Land Restitution (2011); the paper from an antique land register, and the tree itself symbolises land ownership. As the gallery notes say, the piece fits into the context of Calle’s other work, which “questions the power and authority of the written word over oral traditions” – here that is, I understand, the fact that the complex texts of modern lawmaking can only attempt to do what planting trees once achieved. For me, it’s also a work of absences: the innovative medium means we do not get to see Colombia, nor those whose land was stolen. Its aesthetic of stylised typography means the tree is only suggested, not actually there: a coolly eloquent expression of displacement. Fittingly, the exhibition also includes work by one of the displaced, Abel Rodriguez, who relies on his memory to paint the home he left behind. 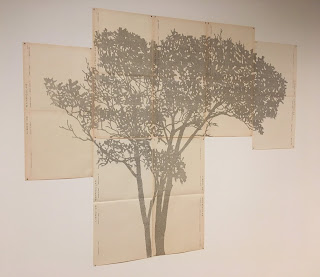 Some of the exhibition’s most powerful work found the artists using the tree as a kind of organic mirror, the better to examine themselves and their practices. Kirsten Everberg, heavily influenced by film locations, paints a birch grove, ‘lit’ in the manner of Tarkovsky’s ‘Ivan’s Childhood’. Zoe Leonard’s photographs evoke the strain against creative boundaries through images of trees pushing through fences or outgrowing confined spaces. George Shaw’s charcoal drawing of a fallen tree – a starker, monochrome contrast to his usual paintings apparently inspired by his father’s death – is inescapably poignant. We see not just the collapse of the trunk, but the exposed, unearthed roots. Two photographers – Rodney Graham and Robert Smithson – give us ‘upside-down’ trees, both prompting us to look at the subjects almost as abstract patterns (Graham) or systems (Smithson) without our pre-set ‘tree-love’ doing half the work for us.

There are spectacular pieces from contributors tackling environmental issues head on. Two brilliant, large-scale video installations challenge our powers of observation. Jennifer Steinkamp’s ‘Blind Eye, 1’ is a digitally-manipulated animation showing an ‘impossible’ forest (we are in the thick of it, with no floor or canopy to orientate us) rattle through all four seasons in three minutes. It’s a bravura contrast with Eija-Liisa Ahtila’s multi-screen film of a spruce. The images are turned 90 degrees, so that we see the tree sideways – bringing home the notion that we see the tops of trees so rarely compared to the bases: what other details do we routinely miss? On the subject of spruces, there is Rachel Sussman’s photograph of a 9,500-year-old specimen that has been quite happy close to the ground for all that time, until the warming climate forced a late growth spurt over the last 50 years. An extraordinary ‘trompe l’oeil’ sculpture by Kazuo Kadonaga re-assembles a cedar tree from hundreds of thin paper sheets it was used to create. 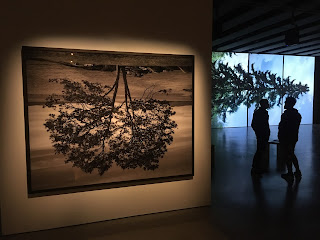 I can’t mention everyone, of course, but I think the real power of the exhibition lies in its collective, cumulative effect. Putting down metaphorical roots, the trees do provide a consistent, conceptual still point that can withstand the storm of messages and statements around it. It’s impossible to take in the show without your mind filling with contradiction and conflict. For example, the irony cannot be lost on the artists that in most cases, trees have been sacrificed to bring their work into existence.

And, as I so often find with the Hayward, the gallery almost always seems to become one of its own exhibits. Part of the brutalist monolith of London’s Southbank Centre, the space’s unforgiving, slab-concrete shell means that the hang itself is a kind of surreal triumph, daring the natural world to gain the upper hand. Please go if you get the chance.

‘Among the Trees’ is now running to 31 October.

While current restrictions are in place, you must book a timed ticket in advance, at https://www.southbankcentre.co.uk/whats-on/art-exhibitions/among-trees?eventId=855751