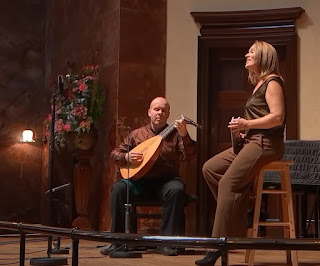 Even if there had been no lockdown, and no live music drought to go with it, I think I would have been excited about this concert to borderline-unmanageable levels.

Carolyn Sampson is one of my very favourite singers, and – to my delight – has shown a strong focus on art song in recent years, performing in support of a brilliant series of albums with pianist Joseph Middleton, and in a separate project, fortepianist Kristian Bezuidenhout. This is the live context where I’ve seen her the most.
But this hasn’t affected her devotion to the type of older repertoire for which she was already justly renowned. (For example, she appears with regular colleagues Bach Collegium Japan on their recent recording of the St Matthew Passion, which has just won the 2020 Gramophone Award in the Choral category.) This is an area where I’ve done most of my catching up on disc, so any chance to hear her sing early (earlier?) music with another long-standing duo partner, lutenist Matthew Wadsworth, is to be gratefully seized.
Of course, this is art song too, in a way, if not in the ‘textbook’, more modern sense of lieder, or mélodies. We are still hearing settings of pre-existing verse for one voice and one instrument. (And no dividing line is necessary – take Britten’s Purcell arrangements, for instance.) But something about the nowhere-to-hide clarity, or the nimble movement from the lute and its wholly different interaction with the voice, cast a spell over me in a way I’m not completely used to. Art song for me is a slightly obsessive love, an immersion, an abandonment. A security blanket, a bottomless well. This concert – and I mean this as the highest praise – pinned me to my seat, transfixed, almost trapped. I almost wanted to stop breathing at certain points, in case I invaded the sound myself. 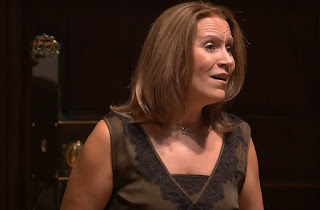 The pin-drop silence in the room was all the better for appreciating the pin-sharp performances. I want to say Sampson’s performance was characteristically beautiful. What I want to convey by that is her ability to sing so clearly, cleanly and accurately while wrapping up that technical skill in an emotional truth – a brightness of tone that she can nonetheless bend and shape into any timbre the song requires, and make it feel like the most natural form of communication in the world.
The duo’s chosen programme – of ‘favourite 17th-century songs’ – was designed to show music’s presence and importance in all areas of life, and the resulting range of moods allowed Sampson to demonstrate the variety of vocal colours at her command. From the humorous ‘Paggington’s Pound’ (an ode to thievery that involved some superb, if not quite sleight-of-hand, business with Wadsworth’s wallet) to the deeply involving laments of Robert Johnson, or constantly-shifting moods of Purcell’s ‘Bess of Bedlam’. As a strong actor-singer, Sampson’s intricate renditions consistently drew you into further intimacy and engagement. I can recall a couple of moments in the songs I mention above that I forgot our collective situation: forgot my mask; forgot there was no-one sitting near us, or in the rows closest to the stage; forgot the vague tingle in my hands from the 19 varieties of hand-sanitiser I’d already used that day. Such is the power of live music.
Wadsworth played with extraordinary sensitivity – I am in awe of these complex, dazzling patterns that track the voice with seemingly telepathic sympathy, whether winding its way through its own tune, or providing the necessary wash to ‘float’ the notes above it. I think it takes a rare musician to make you feel you’re hearing ‘Greensleeves’ for the first time, but allow Wadsworth’s robust solo through one of the verses to persuade you accordingly.
I should also make special mention of ‘Echoes in Air’, a solo theorbo piece composed by Laura Snowden last year especially for Wadsworth. A remarkably evocative instrumental, it showcases Wadsworth’s formidable touch with near-repeating chords and clusters of notes moving ‘in and out’ – louder then softer – of hearing range, taking full advantage of the resonant bass notes the larger instrument can provide. While certainly melodic, it was as much about ambience and rhythm: it stretches across the years by treating the theorbo as fully modern, with minimum fuss. 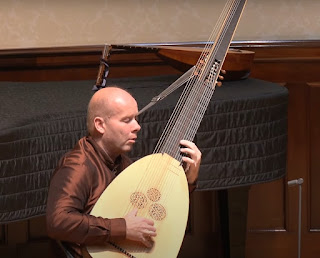 (If you’ll forgive the genre side-step, I think anyone who likes acoustic guitarists who experiment with fingerpicking techniques and multiple tunings – think John Fahey, Michael Chapman, Gwenifer Raymond, James Blackshaw, Marisa Anderson, Glenn Jones and many more – might be drawn to this piece. I visited Laura Snowden’s website after the event to find that guitar is her instrument and she composes in folk and rock spheres as well as classical.)
In the sense that ‘Echoes in Air’ – as an interpretation of the title could suggest – was like breath given voice, a musical expression of the presence of life, it was a perfect fit for this concert.
The concert was also a perfect fit for the times. The performances would have been stellar under any circumstances, but how much more exposing must it have felt for Sampson and Wadsworth with such reduced attendance? – a fraction of the usual applause, murmur and rustle of programmes (and, perhaps on a more positive note, people seem extremely reluctant to let loose a volley of coughing…). We tried our best to clap as if we were our actual number several times over. But I believe the moments of space and silence only served to draw us more intently into the music, and bring us all – performers and audience – closer together: their welcome collaboration and our eager appreciation making a kind of communion that still managed to suspend the restrictions and absences, if only for that hour or so.
*
Wigmore Hall’s current season continues, under current guidelines, with reduced audiences. Friends of Wigmore Hall can apply for concert tickets by ballot. However, every single concert is available to live-stream (and then watch afterwards) on the Wigmore Hall website. These are free to view, but of course, please donate if you can.
Find out more at https://wigmore-hall.org.uk/
This concert is available at: https://wigmore-hall.org.uk/live-streams/carolyn-sampson-soprano-matthew-wadsworth-lute
All the lunchtime concerts are being broadcast by BBC Radio 3, and as usual will then move to BBC Sounds. Go directly to this concert at: https://www.bbc.co.uk/sounds/play/m000ms2f
Posted by Adrian at 10:26