I had heard guitarist Sean Shibe once before at the Wigmore Hall, giving a late-evening recital based on his second CD, 'softLOUD'. If you've heard of - but not actually heard - 'softLOUD', it may be because it won Gramophone magazine's inaugural Concept Album award in 2019.

Banish any images of 'Tommy' or 'The Lamb Lies Down on Broadway' that phrase may have just conjured up. Shibe's concept was partly to demonstrate the two distinct sides to his practice: the first half of the album acoustic and the second half electric. There's no doubt that the album throws down a gauntlet to the listener, settling them in through a sequence of beautiful Scottish lute tunes, only to shake their foundations by the end with the scorching 'Killer' by David Lang.

But the genius twist on the idea, in my opinion, was to resist the suggestion that the dividing line was as absolute between 'old/new' or 'traditional/modern'. (I don't think it's accidental that the words in the title are run together, or even superimposed on each other in the album artwork.) For example, the Macmillan pieces arranged for guitar in the acoustic section are far more recent than the Reich in the electric part. Elements of the LOUD selections call earlier tracks to mind, whether it's the relative gentleness of the Slow movement of 'Electric Counterpoint' or the Julia Wolfe suite that still carries the atmosphere of the bagpipes it was originally written for, ensuring both halves of the record carry a tartan flavour. It's as if the mischievous, disruptive side of Shibe's musical personality turned to its more restrained counterpart, chuckling like a Bond villain, "Ah, Quiet Sean? Perhaps we are not so very different after all..!" 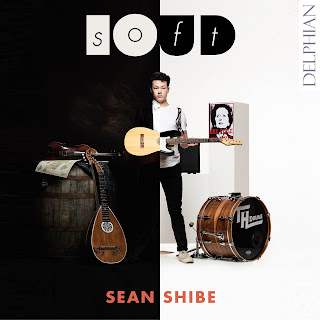 Looking back, this desire for mixing things up was always there: Shibe's debut all-acoustic disc, 'Dreams and Fancies', focuses on English music but stretches from Dowland to Britten. But it wouldn't have prepared you for 'softLOUD'; and with this latest recital programme, he pushes the boundaries even further than before...

Rather coyly, Wigmore Hall advertised Shibe's instrument as merely 'guitar'. However, I remembered from that previous recital that he had blown a few cobwebs away from the corner of the auditorium when he plugged in and let rip. So, deliberately avoiding any advance listening (so the concert would have maximum impact), I confined myself to reading up a bit ahead of time on 'Ingwe', the piece by Australian composer Georges Lentz that was to take up the entire second half of the gig. 'Ingwe' is an Aboriginal word for 'night', and forms part of an ongoing - and seemingly never-ending - cycle of works by the composer that chart his arrival at a kind of spiritual emptiness. The work aims to conflate, I understand, a 'long dark night of the soul' with the vastness of the Australian desert night. It's a 60-minute piece for solo electric guitar.

So, in some respects, this concert was modelled on the 'softLOUD' template. As the lights dimmed for the first half, Shibe appeared in smart, sober attire, took a seat and leaned over his acoustic classical guitar. And despite the 'soft' instrument of choice, the works we heard were contemporary (David Fennessy's 'rosewood' from 2011), closer to mid-20th century (Sofia Gubaidulina's 'Serenade' and 'Toccata'), then right back to the early 18th for an arrangement of Bach's 'Suite in E minor' for lute (or lute-harpsichord). In itself, this part of the evening held its fair share of revelations for me: the inescapable reach of Bach through the centuries, and how current the suite sounded alongside the more modern pieces. Also - and I realise this is a personal reaction from someone who also listens an awful lot to singer-songwriters wielding acoustic guitars - there is something inescapably rhythmic, danceable about the way a solo guitar must provide propulsion and melody together - it's almost percussive. All three composers provoked this reaction in me, in spite of their very different styles, circumstances and, of course, timeframes. Shibe treated them with equal reverence, dazzling displays of seemingly impossible fingerwork never disrupting the delicacy and space certain passages demanded. More of this later.

After the interval, reverence was perhaps in shorter supply, in favour of abandonment. During the break, the Wigmore 'roadies' had quietly electrified the set-up. Speakers were already in place at each side of the stage: now an amp appeared, and a full-height stand with an iPad, presumably displaying the 'Ingwe' score, whatever format that may take. Then the great visual coup de grace of the evening: Shibe reappearing in a bright jumpsuit (shocking pink, to my eyes and my phone camera) - the colour remarkably similar to that of his guitar lead, as though he was an extension of it: as if to emphasise the idea that whatever we were about to hear, he was somehow the conduit, or channel, for it, not wholly its master.

The ritual began; closely followed by the first walkouts. Notes were struck suddenly, at immense volume, then separated by silences. Riffs seemed to arrive then almost immediately depart. Single strings or chords were picked or strummed repeatedly, to build and build, Shibe seeming to half-scream as if lost in a 'solo'. But while he looked every inch the rock star, this wasn't rock music we were hearing. Lentz constructed 'Ingwe' in deliberate sections, and wrote within a framework (set number of beats to a bar, varied number of notes to each beat) that allows for a certain freedom within limitations. Accordingly, the longer you listened, the more this structure emerged, as certain patterns or ways of playing recurred, even in the spaces between the shredding. 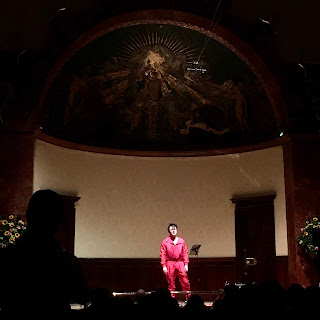 As regular Specs readers will know, I'm a fan of extreme metal / guitar music, so I didn't expect this piece to faze me. It's worth pointing out that anyone with similar leanings - who might be familiar with the subterranean drones of Sunn O))), or who has experienced a Swans gig where the sound can be felt against your skin, would 'get' the power of 'Ingwe' straightaway.

For all that, I have some sympathy with those who felt they couldn't take it - while this was a more youthful audience than many I've seen at the Wigmore, a lot of their regulars are simply infirm, or have hearing issues. If they turned up with an open mind but primarily because they liked the Bach suite, they may not have expected some subtle rearrangement of their internal organs in the second half. But the point is: most people, overwhelmingly so, were captured by the work's relentless focus, and accordingly, stayed.

Shibe played 'Ingwe' like a man possessed, contributing to the intensity already inherent in the stop-start, brutal dynamics of the piece. If the music describes something akin to a mental collapse, fractured, unpredictable, obsessive, then Shibe embodies it. The jumpsuit itself becomes a resource, as various playing tools and devices come out of the pockets; he physically attacks the sound, stabbing at his effects pedal to warp and damage the sustained notes. There are moments of awesome beauty - I found one passage in particular almost unbearably moving, where a keening melody in a high register somehow keeps replenishing itself above a thick, distorted foundation.

Even as my senses were reeling, these snatched moments of delicacy brought home to me the brilliance of the overall programme, as those elements of repetition, space, even use of silence in the first half were sowing seeds for the monumental, supercharged, dark reflection of them in the second. A phenomenal evening.