Absolute red letter day for me a couple of Fridays ago (14 February). Obviously, it was Valentine's Day - ahem, Mrs Specs may be reading this, you never know - but as well as that, it was the launch concert at Wigmore Hall for the new album from soprano Carolyn Sampson and pianist Joseph Middleton. So we knew where we needed to be.

Regular readers will know that Team Sampson/Middleton are my favourite classical song duo, and won't be at all surprised that this recital had been circled in my calendar for months. The new release is called 'The Contrast: English Poetry in Song' and features work by Bridge, Quilter, Vaughan Williams and Walton, alongside the world premiere recording of 'Five Larkin Songs', originally composed by Huw Watkins for Carolyn Sampson around ten years previously. (For the hour-long concert, we heard a streamlined version of the album that omitted the Vaughan Williams tracks and one of two groups of Walton songs.) 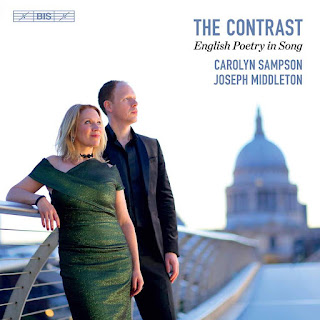 When I heard that the focus this time round was on English composers, I was intrigued straightaway. It's not as if the repertoire has been hiding in a cupboard, as such - Quilter had also featured on the duo's superb 2017 release with Iestyn Davies, 'Lost is My Quiet', alongside some of Britten's Purcell arrangements. But I did pause to reflect guiltily on the sheer number of lied and mélodie recitals I had been to in comparison, and the scarcity of English recital discs I seem to notice when browsing in a classical CD shop (mind you, these establishments are, admittedly, pretty scarce themselves). For example, Claire Booth and Christopher Glynn's excellent Grainger disc, or Roderick Williams and Susie Allan's 'Celebrating English Song' are both three years old now, too. I would gladly be directed towards any I've missed. Am I accidentally overlooking the art song on my own doorstep? Or are we more widely modest, even shy, about our 'own' classical song? Does it feel a bit 'on the nose' when it's our own language?

The prospect also made me think about my own general relationship with art song. I am not a gifted linguist... So, while I read the relevant translations and make myself aware of the subject matter, I can also very easily and happily listen to lieder or melodies as pure 'sound', while they are new to me: relying on the music to tell me the meaning until the song is so ingrained that I connect with every line. Of course, this would not be the same with a 'full English' programme - I could expect to decipher the words, and my connection this time would be more immediate, possibly instant. I wondered how different it would feel from listening to any other type of homegrown song - pop, folk, jazz - delivered with just piano and voice.

I was right about experiencing an instant response. I was momentarily surprised when no song texts were available (obviously they're a given when translations are needed) but in the event, of course we didn't need them. CS's diction, and emotional investment in every syllable, meant that I heard and understood everything straightaway.

After last seeing Sampson & Middleton perform (at the Oxford Lieder festival), I wrote that I felt CS was on a kind of 'journey' with her voice - I was trying to say that with each album or recital she seems to find different ways of using it, exploring its possibilities.

All of this comes to the fore from the outset in the Walton cycle 'A Song for the Lord Mayor's Table' (1962). Here, she went fully into character - and accent - as the downtrodden EastEnder of 'Wapping Old Stairs', and embraced the arch shift in tone in 'The Contrast' to produce several lines of audible, yet still sweetly delivered, sarcasm.

Perhaps partly - or especially - because I was previously unfamiliar with much of his work, Walton in fact emerges for me as the wild-card / loose-cannon figure in the enterprise. Given his years of activity, he seems to have been particularly alive to jazz and blues. The CD closes with a track called 'Old Sir Faulk' which is essentially a gospelly rag, playing beautifully with CS's angelic tones above JM - not to be coy - getting his funk on with a swinging accompaniment.

(The way both Walton cycles in places conjure up musicals - and music halls - or jazz/cabaret made me think of an English version of those points of intersection where you can hear the lines blur between mélodies and chanson.)

Those 'Façade' settings of Edith Sitwell poems belong to the thirties, but the jazz influences are surely still firmly in evidence a few decades later in the 'Lord Mayor' cycle, with the title track exploding into vamping chords, say, or 'Rhyme' taking the familiar 'Oranges and Lemons' chant as its starting point but exploring changes and variations on the original theme throughout. Both of those songs also reach their climaxes in dizzying vocal cascades, that - contradiction alert! - give the impression of being written to sound improvisatory.

To this listener, the Walton songs seem to place extraordinary demands on the voice, but Sampson inhabits them to the extent that the leaps, bounds and quick changes sound utterly natural. Natural not only because of her characteristic purity and precision, but also because Walton's writing tracks the words like prey, binding the poetry to the setting - it may be straining at the leash, but never lets go. 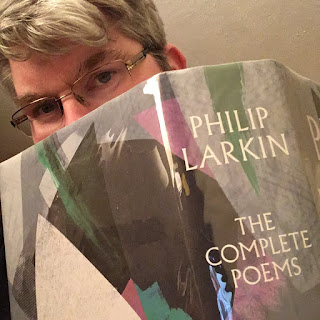 This intricate relationship between the sense of the verse and the setting make Watkins' 'Larkin Songs' perfect companions to the Walton. I remember from studying Larkin how he wielded words and their rhythms, syllable by syllable, as if using a scalpel: a fine point, capable of such delicacy, but then a sucker punch or harmful wound. Watkins' formidable achievement is to weld these sharp surprises into the fabric of the tunes. The horror of the drowning image in 'Who called love conquering'; the building hysteria of 'Wants', flipping into panic at mentions of sex and death but lapsing back temporarily into woozy hesitation for the calendar, and life insurance; the racing cynicism and ranging thoughts of 'Money', slowing down with increasing realisation for the final line; the accompaniment for 'Dawn' nailing with its near static pace the way Larkin, perhaps typically, found something funereal in the start of a new day.

The magnificent piece at the centre of the group, 'Love Songs in Age', still resists sentiment. But Larkin is capable of sympathy and understanding. Watkins' sensitivity to the song's protagonist is immense: JM's delicate accompaniment to CS's gentle rendition of the melody invokes the playing of the love songs themselves, until the sudden build to a pitch that takes us outside the situation, and the realisation that love did not always 'solve, and satisfy' as the songs promised.

The divide between town/urbanity/hyperactivity and country/emptiness/quiet in the title track could also be a reflection of the album's contents as a whole. The selection and sequence is another programming triumph, as deliberately modern approaches are punctuated with songs aiming more for a pastoral, reflective beauty: Vaughan Williams in 'The sky above the roof' and 'Silent Noon', for example, or Quilter's 'By a Fountainside' and 'Autumn Evening'.

The appropriately-named Bridge somehow spans both worlds. Songs like 'Go not, happy day' and 'When you are old' find JM scattering near-abstract shimmers of notes beneath CS's apparently effortless gliding vocal; while in the tour-de-force of 'Love went a-riding', JM's drastic gallop pushes CS to ever-greater dramatic heights.

It's beautifully recorded, as usual - terrific production job by Jens Braun - in a way that allows you to 'hear' the performance: there are points when you can 'see' CS move around or lean into the microphone and the piano sustains and resonates without any blurring of the overall sound.

It would be easy to say (and I'm sure I often do) how gorgeously the music is both sung and played, just like their previous releases. But this CD has an envelope-pushing atmosphere to it. Perhaps because it's all in English, it is clearer than ever how the timbres and colours Carolyn Sampson chooses to foreground in her voice enrich her interpretations of the material. And Joseph Middleton seems to deploy an even greater array of styles than usual, often at the same time - his control of the dynamics of the piano feels almost supernatural at times, whether tip-toeing around the vocal or thundering beneath it. It contains the most fiercely contemporary material they've yet recorded, and they've matched it with slightly older works that may also carry a hint of a challenge, but yield deep rewards.

Every album this duo has made has been a treat, but even by their own standards, 'The Contrast' is - well - something different.