A new album by Barb Jungr is always a cause for celebration, but it's a particular delight to be able to write about what must be one of her very finest recordings. 'Bob, Brel and Me' is the kind of coherent, complete - and importantly, open-hearted and generous - release that makes a long-term fan like me want to take an armful of copies out and press them into the hands of friends, relatives, even unsuspecting passers-by. I'd just have time to say, "If you want to understand why this artist is so special, take a listen to this. It's all in there"... before moving on to my next target. But I will try to explain here, too.

For those of you yet to encounter Barb Jungr's music, I would say the closest genre fit is jazz - that's the section where you'll find her CDs. But in fact, I think she's one of the finest interpreters of  modern song - any song - we currently have. Whether it's a number as old as the hills, rehearsed and retrod by hundreds of other musicians, or something relatively new or obscure - songs undergo a genuine transformation in her hands, and you never listen to them in quite the same way again. While the material might look like jazz - acoustic, usually piano-based, partly improvisatory - it doesn't always feel like it. Jungr ranges across folk and rock for source material, especially the singer-songwriter lineage of the 60s and 70s. At the same time, somehow, she inhabits a world of cabaret and chanson: live, she is absolutely fearless, unpredictable and magnetic - totally unafraid to take the audience on a journey where they have no idea of the destination.

This powerful performing style might partly explain why, in particular, she has a special gift for covering songs by men. (One of my favourite discs from her back catalogue is called 'The Men I Love: the New American Songbook' - featuring material by David Byrne, Todd Rundgren, Paul Simon, Leonard Cohen and Bruce Springsteen among others.) But the Man She Loves The Most in this context is almost certainly Bob Dylan, who has two whole Jungr albums to himself (the mighty 'Every Grain of Sand' and the compilation 'Man in the Long Black Coat') and finds his way in some shape or form onto many of the others.

I don't think it's an accident that these blokes are especially renowned and valued for their lyrics - complex, intriguing words and images come pouring out of them - so their work immediately lends itself to Jungr's storytelling charisma and technical precision (the way she seems able to communicate such emotion while dancing around the melodies and preserving crystal-clear diction is worthy of several air-punches throughout this new CD alone). A superb songwriter herself, Jungr's own lyrics are witty, tender and rich in detail, so it's an extra treat when one of her records features a few self-penned tracks.

Essentially, I think her versions of this kind of  'male canon' are so successful because she has an uncanny ability to take the pulse of a song. Her strength and tenacity mean the material retains its grip, but at the same time she punctures any aggression or 'toxicity' in the masculinity - a double threat. 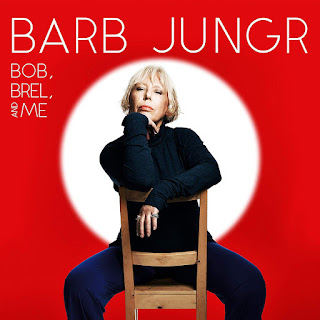 So we come to the latest record, which seemes designed to bring together these three key areas of her craft: 'Bob' is of course Dylan, now accompanied by Jacques Brel to represent the chanson element, and a clutch of mostly new songs written by Jungr with a range of collaborators. Mixing up these three groups of songs results in a seamless listen, due not only to Jungr's voice, but the talents of a really top-notch band - tight and responsive, every track seems to 'evolve' as you listen. There's a large cast, but if I had to mention two specific players who have leapt out at me in the first couple of listens, it would be pianist and arranger Jenny Carr and drummer Rod Youngs.

Two songs sequenced together near the start really showcase their talents. 'Jacky' (Brel) and 'Mr Tambourine Man' (Dylan) make a perfect pair, presenting the 'song and dance man' troubadour side of both their creators. Accordingly, Youngs lifts a terrific version of 'Jacky' with the merest nod to the military might of the original, but with a world-weary, buffeted beat that, more than keeping time, colours the mood of the song around it. While on the other hand, 'Mr Tambourine Man' might be a song that almost everyone thinks they know inside out (especially through the Byrds version) - but here, Carr's intricate arrangement makes her own piano part relatively sparse, but crucially features a tolling, slightly off-kilter, bell-like note, over and over again. It gives the song a flavour of the cyclic, eternal, like a jazz take on 'Winterreise's hurdy-gurdy man. And on both, Jungr weighs each word to perfection, making you wonder how she's actually managing to get through every syllable-packed line while teasing new variations and additions out of the tunes.

But the whole album is full of  commanding vocal performances. 'The Cathedral' (Brel) exchanges the manic intensity of the original with more of a seductive slow-build, Jungr's vocal managing to caress the melody with more layers of attractive embellishment - while at the same time becoming more conversational and persuasive. I'm still not sure how she manages to communicate multiple, at times conflicting moods with just the timbre of her voice, but she does. Another song that benefits from this stately attention to detail is Dylan's 'Buckets of Rain', which here is a hymnal blues underpinned by organ and double bass, elevating the earthly to something spiritual: accordingly Jungr moves apparently effortlessly between a delicate soar and a breathy intimacy.

One pleasing side-effect of these regular returns to Dylan is that the theme of each project overall affects the kind of light Jungr shines on his work. Here, Barb and band have placed him squarely in the Brel Building, with accordion decorating 'Buckets of Rain', and jazz-club piano and sax launching a propulsive pincer attack on the more Bob-like harmonica solo. 'Simple Twist of Fate' is sheer joy from start to finish, with the twist of the title finding its way into the vocal treatment, Jungr varying the circle of the vocal melody or pace while the band changes keys like they were gears.

Scattered among these masterful covers are several infectious originals, seemingly written and scored to stand shoulder to shoulder with the two other 'B's. 'In the Secret Spaces' (written with Jamie Safir) makes more of Youngs's delicately hyperactive drumming, the two-left-feet rhythm matching the bright, conversational tone of the vocal ("the moon - my God, the moon is huge!"), while opener 'Rise and Shine' - a co-write with Level 42's Mike Lindup, gives us tragicomedy in both lyrics and music, as Jungr cheerfully puns and rhymes her way through an agonising break-up story as the band seek to constantly buoy her up. My favourite new song on the record was also written with Lindup: 'Incurable Romantic' casts a characteristically amused look at the old clichés - what concision there is in lines like "Falling free / Into those arms, and no net / How many fish can there be in the sea?" - but set to a sublime tune of deceptively detailed beauty. Looking at the marriage of humour, heart and honesty in Jungr's own work illuminates how and why Dylan and Brel must be so important to her - and, in turn, what she can bring to them.

Barb Jungr has made so many great records. But there's an argument for this one being the finest distillation yet of  where she's coming from, why and how performs such compelling music, and what makes her unique. Warmly recommended.

You can buy 'Bob, Brel and Me' online here.