More musical travels, this time to the Theatre Royal, Nottingham to see Opera North's production of Martinů's 'The Greek Passion'. A completely new work to me, I was quite unprepared for how moving - and ultimately overwhelming - a piece it is. And, much like everything else I've seen so far from Opera North, this production felt supremely confident, generating a grandeur above its means... while, at the same time, communicating something real, focused; drawing out extraordinary drama from previously ordinary lives. 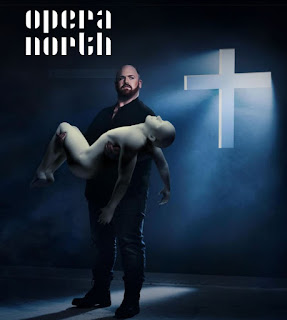 The opera is based on 'Christ Recrucified', a novel by Nikos Kazantzakis (who also wrote the novels that inspired 'The Last Temptation of Christ' and 'Zorba the Greek'). The villagers of Lycovrissi stage a passion play every Easter Sunday; once the performance is over, the powerful priest Grigoris immediately casts the roles for the following year. The devout nature of the community is such that the new group of 'actors' bond straightaway and begin studying and rehearsing their characters.

Before long, the innate power of the gospel story starts to affect the cast, who take on aspects of their biblical alter-egos. In particular, the quiet shepherd Manolios - playing Jesus - turns inward, allowing his fiancée to drift away into a rival's arms. The play's Mary Magdalene, Katerina, is attracted to Manolios, but he resists her affections and urges her towards piety. However, her current lover, Panait - as Judas - watches this chaste romance play out, and broods...

Meanwhile, as the players wrestle with their inner demons, a true test of their Christian values presents itself. Refugees from another village, destroyed by the Turks, arrive seeking help. Immediately fearful and suspicious, Grigoris turns them away, despite the heartfelt and eloquent pleas of their leader Fotis, himself a priest. However, the players advise the refugees to remain close by, on the nearby mountain.

Tensions rise as time passes and the actors identify more and more strongly with their roles. Manolios preaches compassion for the refugees; Katerina takes them milk; Yannakos (the postman playing Peter) is tempted by one of the village elders to steal from the new arrivals but discovers his conscience in time. Ultimately, however, Grigoris manages to turn the village against both the refugees and Manolios. In the melee, Panait - fulfilling his character's destiny in the most chilling way imaginable - seizes the opportunity to murder Manolios ... and the crisis abates. Lycovrissi enjoys a normal Christmas, with the hungry, frozen refugees dying outside its borders.

This opera must make tremendous demands of its soloists' acting abilities. While we never see the full passion play as a piece of discrete drama (chaos erupts too soon), from the opera's outset we watch the players not only take on a further character of their own, but then mine a third seam as the lines become blurred between their fiction and their reality. Each of them managed to embody what seemed to me one of the work's more mystical aspects: that Grigoris's casting seems in some way pre-ordained, and that each villager selected has, somehow, been waiting to inhabit their role all along. 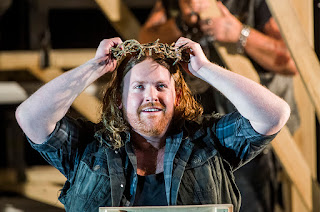 Nicky Spence as Manolios was masterful in this respect. Even when we meet the character for the first time, he is oddly apart, distracted - and somehow unsuited to earthly preoccupations like romantic love. For such a vocal powerhouse, Spence gave a bravely quiet performance, establishing the accidental Christ figure with wandering, distracted looks and diffident body language. Only with his increasing confidence as a preacher came the familiar richness of tone and caressing volume.

It seems harsh to single others out, but still firmly lodged in my mind's eye (and ear) are Magdalena Molendowska's Katerina finding a kind of peace in charity, Paul Nilon's haunted, conflicted Yannakos and Jeffrey Lloyd-Roberts interjecting cries of hate and horror to create Panait's seething, inarticulate rage.

Turning outside the village, John Savournin was a compelling presence as the refugees' spiritual and political leader, Fotis. Stressing these two sides of his character is important, as Savournin's delivery conveyed both compassion and strength, showing us a man of great dignity and self-possession, even when he and his people are at their lowest ebb.

While the performances were impassioned and visceral, the unforgiving poignancy of the plot was underlined by the staging. A casual glance at photos of Christopher Alden's production will immediately tell you that the refugees are represented by effigies. But in fact, this oversimplifies a beautifully subtle idea. Each member of the formidable Chorus of Opera North carries one of the 'bodies'. As such, when the figures are placed in rows en masse, their oppressed silence is visually stifling; yet when the action calls for the Chorus to give the refugees a joint voice, the impact is overwhelming. No-one who saw and heard the 'Kyrie' at the end of Act 2 is likely to forget it, an explosion of tribal anguish and devotion. 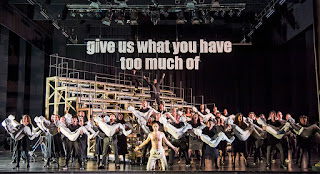 But the double expression of body and voice works brilliantly too, as identities merge and swap. For example, an old refugee, about to die, handed his effigy to the villager Yannakos: the 'body' still in his arms as the singer crawled across the stage to die in his grave. To suggest so much - separation of soul from body; the emptiness of a corpse once the light has gone out; the 'levelling' and even communion brought by death to the haves and have-nots - with such stark visuals: elegance and eloquence in tandem.

I loved the layers of meaning that emerged from this apparent simplicity. The monochrome effect of the refugees (white effigies, black-clad Chorus) contrasted with the ironic opulence of the passion players' coloured robes. (Their stylised posture against the black backdrop reminded me of Bill Viola's 'video paintings', themselves influenced so heavily by older religious art.) The placing of the characters in a 'bikers and barmaids' environment with rustic, menial jobs ensuring there is only the merest sliver of difference between their situation and that of the refugees.

But really my final paragraphs of praise should go to Opera North's Orchestra, conducted here by their incoming Musical Director, Garry Walker. The score is really a character in itself, with Martinů's storytelling so economical (brief, partly-spoken links ensure the story rockets along from incident to incident) that he succeeds in creating an innovative hybrid that feels at times like a purely choral work as much as an opera. This mass-like purity is offset, however, by strains of folk and roots music: in the Theatre Royal, it appeared that two or three orchestra members took turns in a kind of makeshift Unusual Instrument Booth to the conductor's left - one wielding an accordion, for example - to anchor the sound to the soil. To me, the orchestra just felt buoyant - shifting mood, register, tempo as if they were generating a live soundtrack to the stage action.

While the run has now ended, 'The Greek Passion' was broadcast on BBC Radio 3 - which means you can still hear it on their website here, or through the BBC Sounds app. At the time of writing, it will be up for another 20 days or so... taking you to around 8 December. Please listen if you can - it doesn't come around too often and Opera North have done it incredible justice.

(Photos from the Opera North website, with the two production stills by Tristram Kenton.)