What an exhilarating record this is. ‘Future Relics’ is the debut album from guitarist Kevin Daniel Cahill, and I think one of the reasons I love it so much is that it feels like it was made not only by a superb musician, but a great listener. As a result, it’s a great listen.

Reading a description of ‘Future Relics’ might initially make you think it’s more like two mini-albums or EPs gathered into one, as Cahill has assembled two very different ‘groups’ of pieces. One set is a series of classical commissions from composers he asked to write for the album, while theremaining tracks, written by Cahill himself, are rock instrumentals.

There’s certainly an intriguing legacy of ‘split personality’ albums in the rock world, where side one might have had the hits but side two was a playground. You might think of the ‘Abbey Road’ medley, or Berlin-era Bowie’s instrumentals on ‘Low’ and ‘Heroes’ – or even Kate Bush’s piece of audio-theatre, ‘The Ninth Wave’, taking up half of ‘Hounds of Love’. Others among you might come at this entirely differently, perhaps after a listen to fellow classical guitarist Sean Shibe’s recent ‘soft / LOUD’ album, half acoustic/ancient, half electric/modern. 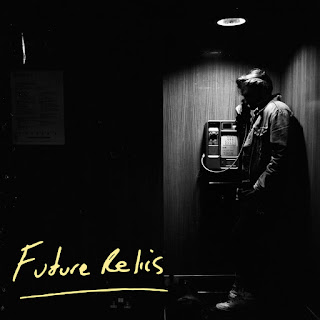 But having identified these two separate sides of himself and his art, Cahill goes one step further and mixes them all up. Dovetailing the different styles of track in this way might seem, to coin a phrase, like a small step. But for the listener, it really is a series of giant leaps, with huge dynamic shifts from speaker-busting riffs and percussion to sparse, delicate picking. (The album is of course available digitally – so you can play any individual tracks you like, in any order you want. But as a measure of how important the sequencing is, I was interested to find that the only physical release of ‘Future Relics’ will be on cassette: the hardest format to ‘shuffle’…) So how and why does it work?

The album perhaps gestures most strongly towards the avant-garde with the commissioned tracks. Featuring Cahill solo, they are often steady and measured, almost at times with an improvisational, ‘working-things-out’ feel. The pieces are not in the least predictable, drawing all kinds of different timbres and harmonics from the guitarist. The combination of careful beauty and occasional savagery make you feel that whatever your accustomed style of player – from Xuefei Yang to Derek Bailey – something will resonate with you here. My personal favourite of these is Ninfea Crutwell-Reade’s ‘Wallflower’ – slightly more fleet-footed, it starts with what sounds like a chiming lead line, only to use it to create cyclic rhythm, while a ‘true’ lead comes in simultaneously, keening, adding a ‘sheet’ of sound almost to ‘”Heroes”’ effect. Haunting yet joyful – a wonderful work.

Despite their immense heaviness at times, the rock numbers also deploy resources with real care and precision. Cahill provides most of the tracks’ heft, with hooks, riffs or drones as required, and gives generous periods in the spotlight to acrack team of fellow musicians. For example, violinist Abigail Young provides the exotic, hypnotic swirl central to ‘We’ve Taken Aqaba!’. On both this track and the fearsome ‘For Deckard’, Graham Costello plays the drums more or less as a lead instrument, driving the piece forward while constantly shifting patterns and rhythms and increasing the intensity. Cahill again finds melody in the metallic, fashioning distorted chords into tunes.


But it isn’t all strum und drang, with quieter electric pieces punctuating the album. The gorgeous, but propulsive shimmer of ‘They speak in never ending light / Resting place, God’s Acre (For Andra)’ manages to look both ways – towards the cyclic sound of ‘Wallflower’ and the more driven, agitated thrust of ‘For Deckard’. The expansive sound occasionally made me think of the peculiarly Scottish feel of ‘Big Music’ (as coined by the Waterboys’ Mike Scott) in whatever form that may take for you: whether it’s split-second echoes of Local Heroics, or sudden bursts of barely-controlled Mogwai-style power.

Of course, it’s Cahill himself who is the unifying force across the whole record. He has shaped it – clearly he absorbs and goes on to write and play all the different styles of guitar music he loves. At the start of the album, we hear muffled voices and noise, as if the overall experience is going to represent a kind of ‘KDC FM’, with us moving between the various stations.

There’s also a strong sense that Cahill is channelling all these sources of inspiration into one style: his own. For all the reference points I’ve mentioned, throughout the album, he sounds like no-one other than himself – graceful, yet rhythmically robust on both the self-penned and commissioned material. I think the production is also a key element: ‘Future Relics’ is very concerned with the physicality and action of playing. We can hear the movement of hand and fingers against strings; the breathing; ambient hum and static – whatever’s going on, you feel like you’re in the room. This analogue touch will only be enhanced when played on a not-quite-silent cassette.

By representing his wide variety of musical passions, Cahill has made a bold record which will certainly introduce some listeners to styles of music they might not have been expecting. In doing so, however, he has in fact made an admirably coherent statement, demonstrating how one’s own work can successfully reflect many sides to the same person.