The lotus eaters: a Dead Can Dance playlist

I recently had the pleasure of seeing one of my most-loved bands of all time, Dead Can Dance, play a stunning set at the Eventim Apollo venue in Hammersmith, London. They feel to me like a band of miracles: a miracle they formed in the first place, a miracle they were able to follow their muse and release their astonishing run of albums, and a miracle it's still possible to hear them as a going concern in 2019.

I'll try and describe them as briefly as possible - they defy easy classification, for sure; and if they're 100% new to you, I don't want to delay your diving straight into the music. But here goes. DCD's 'first life' ran from around 1981 to 1998. At the start, they had something approaching a conventional band line-up, and made a debut self-titled album that, at face value, fitted into a certain type of gothic-indie genre. But something abnormal was going on. The duo at the centre of the sound - Lisa Gerrard and Brendan Perry - were both possessed of truly distinctive voices: LG's neo-classical timbre, keening power and vast range, alongside BP's baritone boom. It was like they were trying to sing their way out of their constraints.

Soon enough, they did. A brilliant EP bridged the gap to the second record, 'Spleen and Ideal' - one of my favourites - which established a kind of template for the future. Gerrard and Perry would be the only constants from that point on. The scratchy claustrophobia of the debut had gone - a kind of noble false start when, surely, the DCD sound is above all about openness, inclusivity, room for manoeuvre. Insatiably curious in their wide-ranging musical tastes and influences, future DCD albums not only absorbed styles, rhythms and instrumentation from all around the globe but ranged across time as well as space, harking back to folk and roots, Baroque and early classical. Often, it felt, at the same time - with those two voices and expansive production holding it all together, helping them to sound only like themselves. 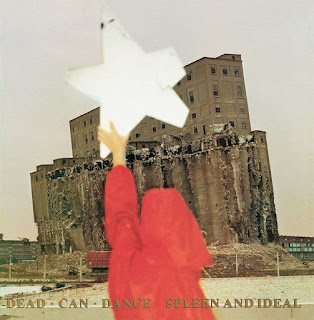 Some of the individual records seem to capture a certain character. 'The Serpent's Egg' is an album of astonishing confidence and grandeur, like a statement of intent - can you imagine taking what is sort of supposed to be a rock album home and dropping the needle on opener 'The Host of Seraphim'? 'Aion' really does feel like stepping into a period instrument Tardis. 'Into the Labyrinth' finds the duo writing separately and, as a late-career record, feels with hindsight like a band growing apart demonstrating extraordinary skill in unifying the tracks.

DCD occupy a slightly odd place in my personal life. A few months after we first got together, the future Mrs Specs and I were in a long-distance relationship, as she had already taken up a job offer back home in Scotland before we met. She came down to visit in June 1996 and we had tickets to the London Dead Can Dance gig... which was then cancelled. And to this day I cannot recall why, when the band scheduled what then looked like a one-off reunion tour in 2005, my eye was so off the ball I missed those UK dates, too.

But luck has turned out to be on my side. After another seven-year gap - which, let's face it, is setting a breakneck pace compared to the kind of absences we've had from artists like Peter Gabriel or Kate Bush - they returned with the 'Anastasis' album and gigs in 2012. And now, there's a new concept record, 'Dionysus' with an accompanying tour advertised as spanning their whole career: in other words, as 'Dionysus' - a suite - resists breaking down easily into songs, we only hear a tiny part of it. The rest of the concert is really a fan's idea of bottled heaven - DCD have a formidable body of work but not 'hits' as such, so alongside the tried-and-trusted numbers, there's some real 'crate digging' going on: box-set only rarities including a couple of demo/session tracks; unrecorded covers. Now the band enjoy an 'on/off' existence amid their solo endeavours, it's of course possible that each record or tour could be the last. We're aware of this. But now the two of us have seen the 'revived' DCD several times, it's like snatching back those missing gigs each time, an extra thrill, an experience we still almost-imagine we'd never have.

For my playlist, I've resisted going quite down that route (and since some it isn't on Spotify anyway, it was easy enough to rein myself in). I have been partial. I've only represented that slightly wayward first record with the Peel session version of one track, which I feel opens up the sound more; and taking the band's lead, I haven't woven in bits of 'Dionysus'. As a result, a few of my most treasured albums have undoubtedly elbowed their way through to dominate slightly. It's a *cough* generous selection - I hope you can find the time to listen to as much of it as possible, and fall in love with the band the way I did.