A fascinating work to review, this. A deliberate hybrid of artforms: the soundtrack element combines features of electronica, classical composition and sound art, while the video it accompanies is more verbal than visual, a series of facts and figures displayed over an unchanging, neutral background colour.

As Clancy is first and foremost a composer, I paid most attention first time through to the music. It is described as ‘drone-based’, so –repeating and sustained patterns of notes and chords, occasional percussion… here, all created on synthesisers. It’s an intense listen: the rhythmic taps near the start reminded me of Reich’s ‘Drumming’, and the flurries of ‘blips’ which follow increasing the sense of bustle, agitation. Even at its most stretched-out, there are often elements of dissonance or slight distortion that underline this unsettled vibe.

As this composer was new to me, I listened to some of his previous work, in particular the album ‘Small, Far Away’. In many ways, much of that record seems to capture – in bite-size tracks – an approach that Clancy is pushing to almost ‘concept album’ limits on ‘Ireland England’. The music suggests to me a grounding in an ambient, freeform soundworld, invaded by more industrial, hyperactive influences… where a Brian Eno recording might be respectfully – but not too reverently – taken apart by sonic disruptors like Aphex Twin or Shackleton. 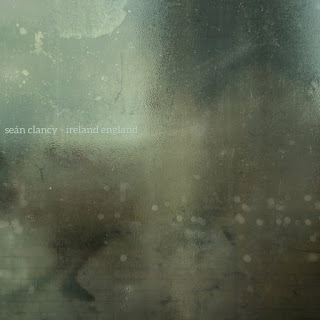 I’ve now mentioned the ‘concept’ – and this is where ‘Ireland England’ in fact becomes a multimedia proposition, as you watch the text video while listening. Like art in a gallery, then, the interpretation is provided to us – we’re not left to our own devices. There are two key strands running through the piece. As ideas, they are linked, but as the music plays through, they run more or less in parallel without meeting.

The whole work represents the flight Clancy regularly takes from Dublin to Birmingham. He has divided it into seven sections (“safety announcement / taxi / take-off / cruise / descent / landing / taxi”). This is all explained in the opening stages of the video, which then pursues the second strand, detailing other journeys made by Irish travellers to England, and their reasons for doing so. My impression is that while the stages of his own commute have given Clancy a framework, his composition really takes flight with this second idea – as the intensity levels of the piece seem to increase at points where the migrations are at their most heart-rendingly stressful (fleeing unrest, seeking abortions).

I suspect that if the visuals had pushed into even artier territory – maybe found some way to illustrate the commuter flight alongside the statistics – the piece could have soared higher. But that is to review something the work isn’t, rather than focusing on what it is.

In the face of such emotive subject matter and such a strong folk tradition, it’s fascinating in itself that a composer has sought to express these scenarios through the ‘colder’ medium of electronics. There are ghosts in the machines.

I like to think that ‘Ireland England’ – outside its mission, so to speak – will find a future as an opportunity for electro-classical musicians and groups to experiment with levels of extremity across single, extended performances. The score Clancy has prepared for the work (some instructions and a single sheet’s worth of notation) seems to allow players to re-interpret almost every element, including its length. The composer’s own 35-minute recording is as precision-tooled as it gets, with the sheet music allowing for performance times of up to an hour or so. It would be interesting to hear a ‘cover version’ and see where someone else might take this blueprint.

In the meantime, I’ll be looking out with interest for whatever Clancy decides to do next.

You can listen to the audio-only version (and buy a download) at the artist's Bandcamp page here.