Last week brought the announcement of the new Proms season for summer 2019 - and with it, the usual range of reactions from cheers to sneers. However, English National Opera (ENO) - for better or worse - chose the same day to announce that its artistic director, Daniel Kramer, would be stepping down from the role after a relatively brief three-year tenure. 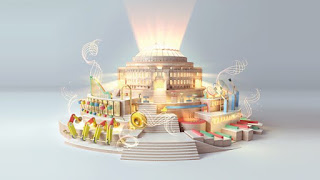 Certainly, this led to something of a negative weighting to the musical social media I tend to frequent. Lewis Carroll may have written about 'hunting the snark', but I tell you, a morning on Twitter and he'd have had more of it than he could shake a stick at.

This is probably easier to explain on the ENO side, because there is simply a corner of commentary (not universal, by any means, but vocal) that seizes every opportunity to have a go at the company. I've written on this before, so won't go on at (*ahem* great) length here, but the skewed vision can be wearing. I recall a recent review saying how ENO needed to 'restore its credibility' after one show the writer particularly hated; or a current piece casually describing ENO as recently having 'more than its fair share of turkeys' as if this was fact. All those turkeys that were nominated for the Olivier Awards this year, presumably.

I have no particular brief for - or beef with - DK himself. I've enjoyed most of the productions at ENO during his era, but not all without some reservations. The point about ENO is that, in my opinion, they have one of the best ensembles - chorus and orchestra - you could ask for; yet recognition of their talent suffers because of this view of the company. Review space is used up with doomy pronouncements on ENO boardroom attitudes, at the expense of writing about the work. (As far as I can tell, this is largely absent from writing in other music genres. No rock writer would spend word count reviewing an album to have a moan about the record label, or file a live gig review and moan about the venue. And god knows, some of those are TERRIBLE.)

But - as if magically transformed back to the playground - the good riddances and told-you-sos echoed around classical music land to the point where I felt like going off for a bit to bake some conkers in the oven. And, of course, the Proms didn't escape either, with the new season described as 'boring', 'absurd parody', 'little evidence of real enterprise'... and one tweet in particular, shown in my screen capture below, provoked me to genuine anger: 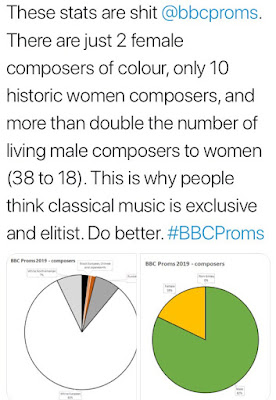 Perhaps the most annoying thing about this statement is that the initial point is clearly well worth making: of course the Proms should be trying to widen its scope and programme with greater diversity. Always. (I happen not to think the reasons shown are why people think classical music is elitist - I believe that's in fact a hugely-nuanced, multi-faceted issue based on a whole range of factors, in which the media plays a huge part. But that's too big a subject for this post, let alone a tweet.)

What I don't like here is the tone. Does anyone? Does anyone read this and think: Bravo! Well put. That'll teach those stuck-in-the-mud, un-woke, dusty old Prom organisers? That'll open a dialogue. Well, of course it won't open a dialogue, because why would you engage with someone who speaks to you like this? And the writer doesn't actually want a conversation, anyway - they just want the Proms to 'do better'. If only the Proms had thought of this.

This 'tone' I'm speaking of has, of course, become legitimised in our social and political discourse - it is apparently perfectly all right to speak in as ill-mannered or high-handed a way as you like to anyone, if 'right' is on your side (or even if it isn't). "Do better" - creeping through the internet like the equally shudder-inducing "Just sayin'" or "Let that sink in" - is now common shorthand for someone who thinks that with a tap on the 'send' button, whoever's on the receiving end should just bow immediately to their 'rightness', no questions asked. Well, your 'righteous' is my 'self-righteous'. Say better.

Of course, over a few days, a certain equilibrium was established, and there are clearly lots of people who are genuinely thrilled and excited about the Proms too, which is great to see. But having some folk say lovely things about the season while others carry on sniping is not quite the 'balance' I'm looking for. It's fine to be thrilled. It's fine to be disappointed. But what do we all do next?

When people are negative on the internet, it's overwhelmingly in as pointed, cutting and hurtful a way as possible. This is, presumably, a result of technological 'advances': the troll is a recent phenomenon. Ranters can get away with more because they can still be relatively anonymous, they react more in anger because there's an instant channel for their wrath, and things like word count (on Twitter, say) encourage more terse, curt modes of expression. (It's difficult to imagine, a century or two ago, someone taking up their quill and sending their victim a letter to read about a week later, just saying - or even "just sayin'" - "Your mum".) 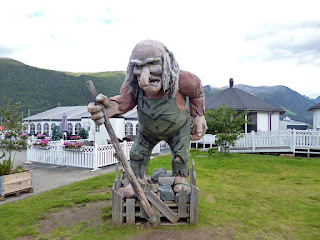 The rude tweeter I've singled out here is almost certainly convinced they're on the side of the angels. But I find it difficult to see the issues they've focused on in isolation. To a punter like me, the Proms feels like an almost impossible achievement, every year. 80+ concerts in eight weeks, involving many of the finest classical musicians from around the world. It includes new commissions and premieres. Is it not the case that pulling any part of this Herculean task together depends, among other things, on the existing and/or new repertoire and busy schedules of composers, conductors, soloists, orchestras... and that's just the 'live' element. On top of that, as part of its education/outreach goals, there are all the Proms talks, programme writing and interviews to commission and arrange. BBC Radio 3 broadcasts every Prom live (and BBC4 is televising 24 of them this year), meaning that every single concert will be available on demand for a month on the BBC Sounds app (that's iPlayer Radio in old money).

Yet pull it together they do, and like many artistic enterprises, we rather take it for granted. There are the people working very hard behind the scenes to make the Proms happen and run like clockwork year in year out... and there are people who wait for a year, take a quick look at the season announcement, and write "Do better". Great effort, second group. See you next year.

In the meantime, the Proms is of course, both a commercial and artistic endeavour, and it wants our money as well as our support. I do think the Proms is - and should be - open to criticism and comment, but this doesn't just need to be polite: it also needs to be engaging and useful. For example, the diversity issue is a crucial one, but waiting for the programme to be announced each year and saying 'not diverse enough' will only have a limited effect.

We can say one thing for sure at the outset: there will never be a perfect Proms season. It won't even come close. There is no way, for example, that it can nail every diversity angle simultaneously. Which groups would you aim to represent and to what extent? Imagine a season where they manage to get a perfect balance between male/female composers, performers and commissions. Would the balance also be right that year between white/people of colour? Between straight/non-straight? Between challenging contemporary music and old, reliable, hall-filling warhorses? Between classical and non-classical?

This is why the 'annual announcement to immediate reaction' cycle is so fruitless. I'm not trying to 'defend' an overwhelmingly male (or overwhelmingly anything) Proms season. What I want is an identifiable way forward that doesn't involve snotty dismissiveness in the media (social or print).

I realise this is 'pie in the sky' stuff, but I'd like to see two fundamental changes to the whole Proms approach... *stares dreamily into middle distance*:

If the Proms are going to celebrate difference successfully, they need to be different.

Three of my favourite fellow bloggers wrote what I feel were very thoughtful, fair-minded and typically individual pieces about the Proms season. As with their best writing, you learn as much about the authors as you do the concerts - please have a read and keep an eye on their work.