Time for the latest in my extremely occasional 'what I did on my holidays' series of posts... As ever, I hope you enjoy the photos and that you might feel encouraged to follow in our footsteps!

To celebrate Mrs Specs reaching what we shall discreetly refer to as a 'milestone birthday', we got away for a week-long break to one of her favourite places in the world: Switzerland. Her history with the country revolves around regular visits to the Bernese Oberland with her folks during her teenage years. (My equivalent is the Isle of Wight, which - let's not be coy - has less potential as a celebratory romantic getaway.)

In more recent years, we've also explored and fallen in love with a completely different area, the Engadine region - which feels a bit more like our 'own' discovery. For this trip, the Mrs wanted to do something different again - so we stayed in Lucerne for the first time, a city we'd only managed to admire in the past on passing through.

I used the phrase 'romantic getaway' a few sentences ago, but that's not strictly a perfect description of this jaunt as (a) my in-laws invited themselves along; and (b) it involved a transport museum. However, the time really seemed to race by far too quickly for fond looks over the fondue.

Even though we were only around for a week, we saw Lucerne in all weathers. We arrived on a glorious evening: 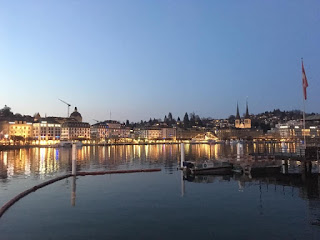 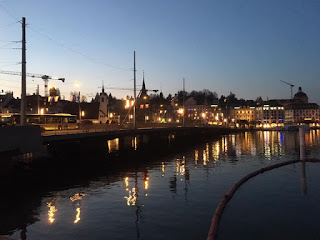 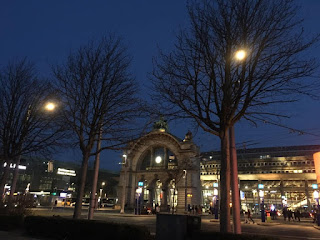 And to our great good fortune, much of the week was like this:

One day was not. 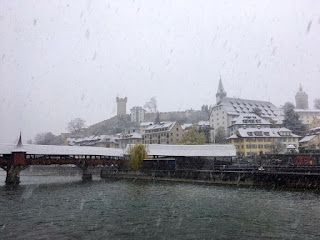 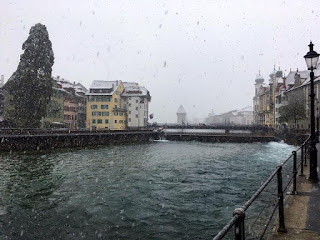 But it did mean that we got a brilliant-white impression of the place when we decided to retrace a walk along the city walls that my in-laws favour: 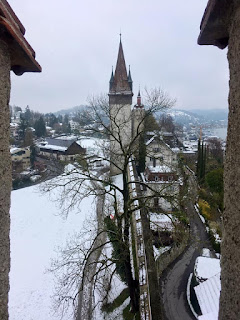 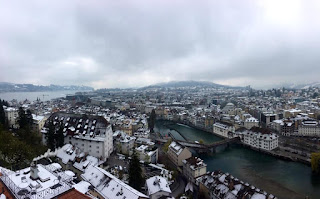 The 'main attraction' mountain in Lucerne is arguably Pilatus - so we went up on our first full day, in case it turned out to be the only decent weather we got. We were rewarded with suitably breathtaking views. 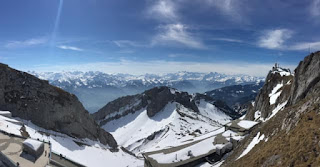 And here you can see what Pilatus itself looks like, taken from the boat trip on Lake Lucerne to Weggis. 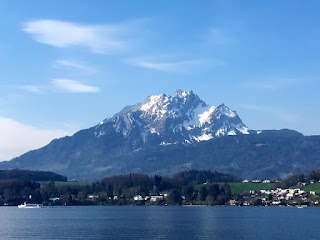 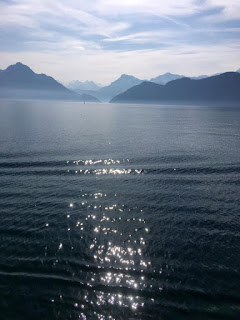 A walk through the old town revealed this gem of a façade. I would dearly love to know what quantities of fondue and raclette whoever painted this was ingesting each evening while 'planning' its 'scenes'. 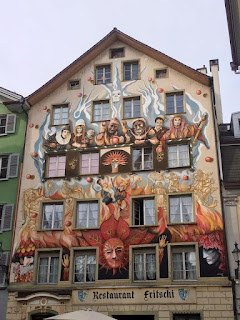 The Swiss Transport Museum at Lucerne was genuinely astonishing. This is not my 'area', but that didn't matter: all one could really do was boggle at the sheer range of machinery on display, much of it highly evocative of more golden ages of travel. I found this a little melancholy, in fact, as though the cable cars, for example - so symbolic of airy, wide open vistas - might somehow know they were cooped up in a building. 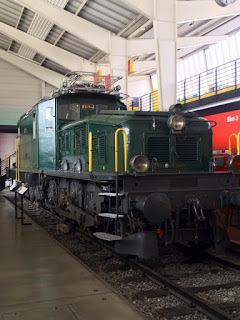 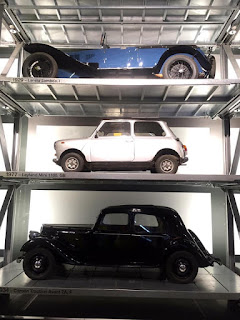 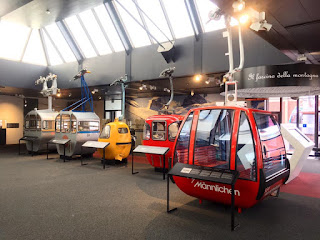 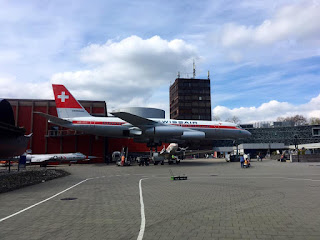 For the large number of you enquiring what my face looks like when I'm lost in a hall of mirrors, here is your answer: 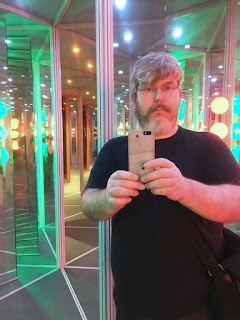 Mrs Specs was in her element on the Museum's 'Live Map'. You could walk - in these rather fetching slippers - across a vast map of the country. Then, through an app on your phone, you could see live location updates: traffic movement, weather and so on. This photo is a weird hybrid screen grab of my better half pointing at the floor, flanked by phantom place names. And my mother-in-law's artificially inflated feet. 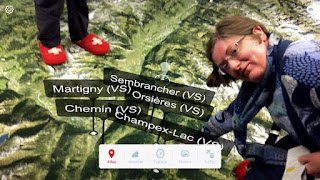 Immensely cheered to find that the 'Top Trumps' game appears to be called 'Top Ass' in Switzerland. I'm sure there are lots of instances where replacing the word 'Trump' with 'Ass' would be perfectly appropriate. (For example, bridge games could be livened up no end with enthusiastic bids of "Five No Ass!" and the like.) 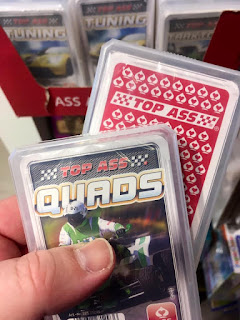 On our one ceaselessly wet day, we took a day trip to Zürich. After some sodden wandering, we were 'forced' to take refuge in the Sprüngli café. 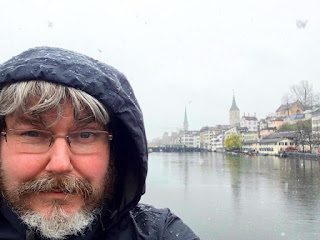 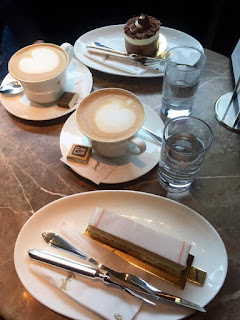 I could not have taken a trip to Lucerne without visiting the Richard Wagner Museum, based in Tribschen, the country house where he lived from 1866 to 1872. The signs to the museum are, shall we say, unmistakable. 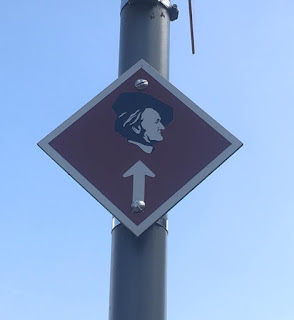 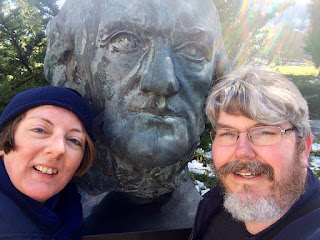 It's easy to see why he found the location so inspiring. He wrote the 'Siegfried Idyll' (some of the manuscript is in my snap of the music below) and completed both 'Siegfried' and 'Meistersinger' while residing in Lucerne. The Museum also displayed early editions of his librettos and books - to its credit, there was no glossing over of his more repellent ideas. A copy of 'Judaism in Music' sits like a festering sore amid exhibits that help remind us that perhaps some of the most perfect operatic music ever composed came from so deeply imperfect an individual. 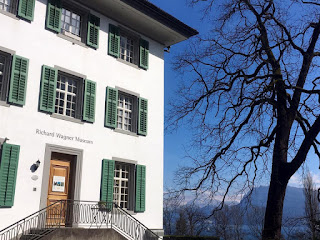 Yes, he turns up inside as well. 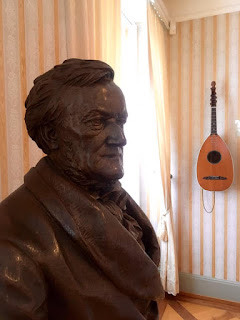 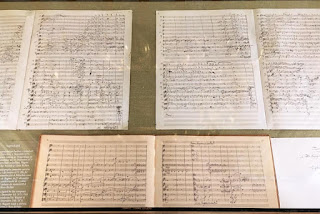 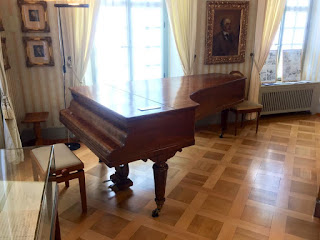 Our last day involved returning to Zürich to catch the flight home. Just time to dodge the street parade (in impeccably Swiss fashion, there were pavement 'corridors' to help you get around through the hordes of spectators) and pay homage to the Opera House. I picked up a copy of the 19/20 season brochure. You never know... 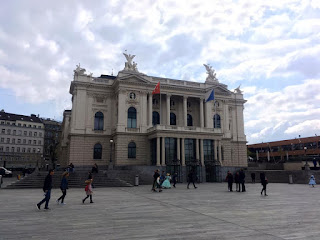 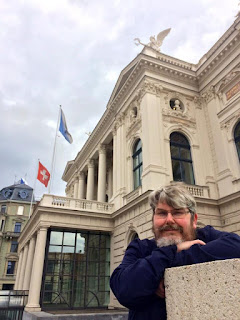