A slightly different post today, with a celebratory tone. On occasion, especially lately, I think I've let my exasperation show on the blog about the day job eating up more and more time - so, while I'm still determined to see and hear as much music/art as I can, I can't write about it as quickly as I'd like, if at all. A classic 'first world problem', of course - I know how fortunate I am to be able to go to these events in the first place - but it still pains me when I feel I'm not getting the word out.

So allow me to wallow in a couple of occasions when I've already written about some music and performances which are now re-emerging into the spotlight - where my finger has briefly, if not quite touched the pulse, at least pointed at it fairly accurately as it hurried past!

A couple of Fridays ago, Mrs Specs and I took a gratuitous day off work to hear Carolyn Sampson and Joseph Middleton give a lunchtime recital at LSO St Luke's of selections from their beautiful 'Verlaine Songbook' CD. It was a reminder - were one needed - of CS's infallible purity of tone and emotional expression, gliding over JM's impossibly fleet, delicate accompaniment. Both concert and album are also a reminder of the duo's love of in-depth programming - what other recital would not only remind you of Debussy's famous 'Claire de lune' setting, but make the case that there are at least two others that might be even greater? Look out for the concert on BBC Radio 3 on 10 April (then on BBC Sounds afterwards, I'd hope) and, even better, buy the CD (more songs!). 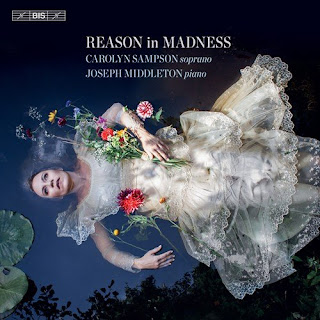 But, in a way, I digress. Another exciting feature of the event was that the artists were signing advance copies of their new recording, 'Reason in Madness' - released this coming week. This was a particularly welcome development, as I'd been eagerly awaiting this disc after being utterly blown away by the Wigmore Hall concert they gave of this programme all the way back in July 2017. (You can read my write-up here.)

I don't want to give the impression that their CDs are 'routinely' brilliant, because there is evidently so much planning, forethought and care poured into every one. But 'Reason in Madness' the album is as fine a realisation of the gig as you could hope for. As with their previous discs, it's hard to imagine reaching the end of the year without this remaining as one of my top releases.

The songs chart not just the poignancy and frequency of female madness in literature but also the cumulatively unsettling fascination of male poets and composers with the subject - in one case, the poet Pierre Louÿs actually claiming his Bilitis verses, set by Debussy, were written by a contemporary of Sappho. The concert version played out in two halves around the interval - German and French - each building in atmosphere and intensity in quite different ways. On the CD, they have carefully adjusted the sequence to work as a single listen: 'sets' of songs are preserved (for example, a trio of 'spinning' tales, Ophelia lieder from Strauss and Brahms, Wolf's Mignon Lieder), but the German and French treatments now dovetail each other, sustaining the mood throughout, and emphasising the pervasiveness of the theme - almost as insidious as madness itself. 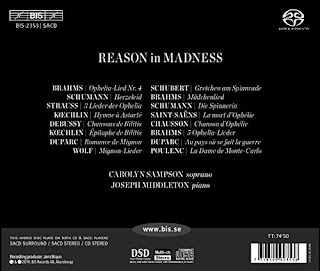 At the end, and rightly so, is the near-operatic showstopper 'La Dame de Monte-Carlo' by Poulenc. The heartrending, characterful gear-shifts here (combined with the memory of CS's recent haunting portrayal of Debussy's Mélisande for Scottish Opera) make me hopeful that this pair will one day tackle the voice/piano version of Poulenc's 'La voix humaine'. Putting in my official request now!

Keep an eye on the BIS Records website to buy 'Reason in Madness' on release.

As regular readers will know (thank you, darlings, thank you), I'm a fairly vocal supporter of English National Opera. Historic trauma behind the scenes (well-documented and, one hopes, increasingly a thing of the past) has resulted, I believe, in ENO negotiating choppier waters in the public eye than certainly the performing ensemble deserve. But whatever the various pressures they've been under, the resident company have never let me down: from the luxurious versatility of the Orchestra to the truly outstanding Chorus - a group of fiercely talented actor-singers (reliably taking on solo parts when required), who are always able to deliver that spine-tingling wall of sound, while convincing you that you're watching an array of individuals who somehow work in sync, constantly aware of each other. They are the reason that ENO Studio Live - a Chorus-driven enterprise that takes smaller productions out of the Coliseum into more intimate venues - has been such a great success: they can clearly 'headline' and shoulder a show in their own right, bringing the audience close enough to hear their separate voices and see just what they're capable of.

How brilliant, then, to read that four ENO productions have been highlighted in this year's Olivier Award nominations. One of them, I confess, I didn't manage to see: the collaboration with Regent's Park Open Air Theatre on Britten's 'The Turn of the Screw', which has been nominated for Best New Opera Production. It's up against a couple of strong contenders (both Royal Opera House - 'Katya Kabanova' and the terrifying 'Lessons in Love and Violence') - best of luck to them all.

The other three nominations are for Outstanding Achievement in Opera... 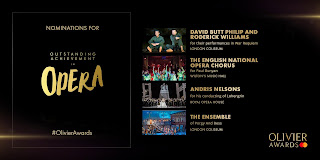 Thoughtlessly gatecrashing the nominations without having anything to do with ENO is Andris Nelsons, for his conducting of ROH's 'Lohengrin'. Even if AN's great work brings him eventual victory (though I shall have to write an indignant 'Nelsons column' if he does!) … this is such a great reflection of how ENO has been firing on all cylinders in recent months - and hopefully into the future, too.

You won't be at all surprised at my hope that 'Paul Bunyan' gets the nod, despite my admiration for the other nominees. I'm a little disappointed that the 'War Requiem' nomination didn't include Emma Bell (the piece gives prominence to three soloists), or for that matter the combined vocal forces (which included the regular ENO Chorus, the 'Porgy and Bess' ensemble and Finchley Children's Music Group, all acting from memory a piece normally performed with score as a static work.

But 'Paul Bunyan' - with ENO's Chorus and cohorts taking over Wilton's Music Hall, bending and shaping it into an idiosyncratic opera grotto, was such a consummate achievement for all concerned, combining the volume and command of operatic voices with a guerrilla-revue sensibility and the immediacy and intimacy of a club gig. No-one who saw it will forget it, and it's already earned its first revival, this time at Alexandra Palace Theatre. (I've booked.)

ENO always inspire me to write, so you can refer back to some of my old posts for more info. My reaction to 'Paul Bunyan' is here - which I hope might prompt you to book a seat for the revival. I also did a part-season round-up which included 'Porgy and Bess' and 'War Requiem' - here.