I was quite late to this particular party. I'd managed to get tickets for 'Paul Bunyan' on the last day of its week-long run. As a result, once it opened, I had the pleasure of seeing the great reviews it received rolling in, and hearing that every last ticket had sold... combined with the agony of having to wait the whole week to see it for myself.

Now another week has gone by. The (saw)dust has settled on the production, and I've hardly stopped thinking about it since. I already know that it will be one of my absolute highlights of the year - but how to start explaining why...?

The show was the latest in English National Opera's 'ENO Studio Live' initiative, now two summers old and going from strength to strength. It's a beautifully appealing idea: outside the regular opera season, when their vast home venue the Coliseum tends to host musicals, the ENO ensemble 'breaks free' to mount smaller-scale productions. But because this is ENO's Chorus and Orchestra we're talking about, 'smaller-scale' doesn't mean there's any reduction in ambition or achievement - quite the opposite. 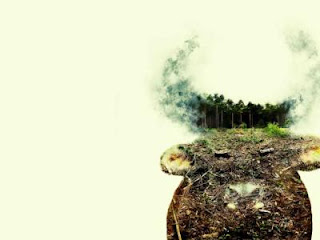 ENO Studio Live productions before 'Paul Bunyan' have all been staged in the company's rehearsal studios, Lilian Baylis House in West Hampstead. But this time, the setting would be Wilton's Music Hall, the oldest surviving establishment of its kind, a noble relic of sorts with a structure that seems to consist entirely of nooks and crannies. Once in the auditorium, you get a simultaneous impression of narrowness and height - which, as the show will prove, offers the ideal combination of intimate theatrics and vast sound.

'Paul Bunyan' is an operetta by Benjamin Britten, with a libretto by W H Auden. It pre-dates all of Britten's mature operas, being a product of his stay in the US, and as such the score references jazz, blues and show-tunes in a dazzling display of genre-hopping versatility. This is just one of the ways it feels very 'current', in a year when we are celebrating Bernstein, and ENO's first production of the Gershwins' 'Porgy and Bess' is only a couple of months away.

The operetta's subject matter deliberately mines American myth, focusing on Paul Bunyan, a legendary giant logger who clears the forests to usher in modern agriculture, progress over the primitive, man over nature. In a masterstroke, Bunyan himself is never seen, written as an offstage speaking voice to which the visible characters react. This gives him the aura of a 'Voice of God', for sure - but equally serves to distance him from the mayhem his innovations create.

The action walks a constant - but sustained - tightrope between the absurd/surreal and the truly affecting. Amid groups of talking trees and animals, in-fighting lumberjacks and a pair of chefs who can only rustle up soup and beans between them, several characters emerge to absorb the full impact of Bunyan's orbit. Among them are Bunyan's daughter Tiny, who suffers her parents' break-up and the loss of her mother; Hot Biscuit Slim, the cowboy who can actually rustle up a decent meal; Johnny Inkslinger, the reluctant book-keeper; and Hel Helson, the hapless foreman.

It's an 'unbalanced' work, in every sense - at moments, you feel it's properly unhinged. Equally, the first act is almost like a revue in its quickfire array of set-pieces and 'hit mumbers', while the second act is required to slow down, resolve the strands of story and supply the necessary weight, as Bunyan moves on to leave his acolytes searching for their version of America. 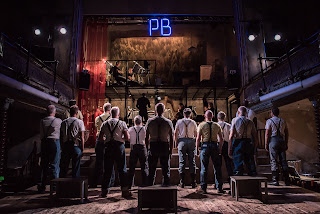 (The men's Chorus face the orchestra. All production photos by Genevieve Girling, taken from the ENO website.)

However, ENO's production finds the balance. I thought this was one of the most deftly thought-through stagings I've seen, precision-tooled for the venue. The orchestra were vertical rather than horizontal, arranged in storeys at the back of the stage - meaning no playing area separated us from the actor-singers. Under Matthew Kofi Waldren, they negotiated the lightning shifts in style with real pizzazz, finding that under-explored middle ground between pit and nightclub. As the story got darker, red blinds gradually drew over the players, as if twilight was descending on the stage. The recording of Bunyan's voice (a rich, booming Simon Russell Beale), neon lights and plastic props presented a kind of 'electric cabaret', conjuring up a mid-20th century New York milieu, channelling it through the history in the bricks and mortar of Wilton's, and bringing it all into collision with the enchanted forest.

The use of the space to maximise the effect of the voices was breathtaking. The opening moments would have been worth the price of admission alone, as we suddenly realised we were surrounded by the ENO Chorus, and we were inside the sound they were making. I've written before that one of the key joys of ENO Studio Live is that you get so close to the Chorus - it feels exactly like a classical equivalent of seeing a popular band you love in a small club instead of an arena. You start to hear how each individual singer, always captivating in their own right, forms their particular part of the overall blend - as they move, of course their voice travels with them and you have the luxury of experiencing a 'live', ever-shifting sound mix. However, in 'Paul Bunyan' we get to take that further still, a wall of glorious surround-sound as the choristers moved around and among us. It almost felt like being in the Chorus, without having to sing oneself: result!

But more than ever, this latest Studio Live enterprise gave the deserving Chorus - full of gifted singer-actors and always great movers - a significant number of individual parts, too. Various members morphed in and out of different roles, but I'll try and give credit as clearly as I can. 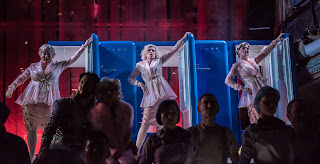 Claire Mitcher, Rebecca Stockland and Susanna Tudor-Thomas (above) combined the narrator role with a trio of wild geese, offering a sassy commentary on events: on stage for almost the entire duration, they pulled off the difficult trick of sounding gorgeous - running the gamut from sultry to sarcastic - while nailing the physical comedy. This set the pattern, though, for their colleagues. David Newman made an indelible stamp - eh, readers? - as the world's most dedicated postman, and - with Morag Boyle, Michael Burke and Paul Sheehan - formed part of the Quartet of the Defeated, an absolute showstopper of a blues song, delivered straight and all the more chilling for it: 'You don't know all, sir, you don't know all' (below). 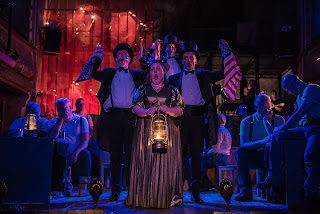 Tenor Graeme Lauren and bass Trevor Bowes were superbly (mis)matched as Sam and Ben, the useless cooks: so heartfelt was their acting that, unexpectedly, I found myself thinking, 'I could actually go some soup and beans' - they never let their ludicrous personas get in the way of their powerful delivery.

I could, quite easily, list the entire Chorus here and I apologise if I've unwittingly left anyone out. But the whole point of naming them is to recognise the distinct mark each member makes on the production.

A true company project, all the remaining soloist roles were taken by singers on the ENO Harewood Artists scheme. Elgan Llyr Thomas was memorably wracked as the conflicted Inkslinger, Rowan Pierce heartrending as Tiny, Matthew Durkan a humorously drawn yet fearfully intense Helson, and William Morgan a heroically confident Slim. These four handsomely carried the final moments of the show where, without disturbing Britten and Auden's closing words and music, they skilfully shifted the mood, through their acting alone, to flip the American Dream into Nightmare.

Congratulations then to director Jamie Manton, himself an ENO Studio Live veteran after directing the first in the series (Dove's 'The Day After'), and his creative team, for reviving this piece, which seems so peculiarly relevant to our current situation. In 'Paul Bunyan', for all its fabulous comedy and derangement, there is damaged nature, reckless humanity, environmental change, techno-fear, mental instability, bullying, broken homes, latent racism, intolerance, the rise of a new world order. Light on its feet, the production manages to examine, criticise or condemn these as appropriate - following through to its downbeat conclusion - while still sending you out of the Hall feeling thoroughly entertained and energised.

Which finally brings me back to the mighty Chorus, whose collective star wattage forms the absolute backbone of ENO Studio Live, and creates much of this energy, almost to the point of sending electricity coursing through the seats. I hope this show, along with its forerunners if possible, can be revived and - perhaps more importantly - recorded, so we have it for posterity. That said, the sky's now the limit: what will they perform - and where - next summer?