English National Opera - or ENO - has now come to the end of its 'main' 2016/2017 season at the Coliseum. What with all of its widely-reported behind-the-scenes woes making the programme slightly shorter and sharper than before (fewer productions, under-use of the chorus) ... I still came away from my last two visits of the season feeling happy to support - and hugely grateful for - such a fine company.

Although the two operas in question are vastly different, in their own ways they each represented some of the best ENO has to offer. One, 'The Winter's Tale', was a brand new work by composer Ryan Wigglesworth (based - for the best, I would say - on the Shakespeare play rather than the David Essex Yuletide hit), while the other was a revival of Christopher Alden's production of Handel's 'Partenope'.

Rory Kinnear directed the new opera, and one thing I suspect his involvement guaranteed was that the piece kept total faith with the original's 'problem play' status. While this is one of several late Shakespeare works that explore the hinterland between comedy and tragedy, the laser-sharp focus of this tight two-hour adaptation underlines how full the story is of tension and suspense. The cylindrical set emphasises the royal family's 'shut-in', ivory-tower insularity (besieged by the chorus's disgruntled mob), breaking open at moments of trauma and revelation. 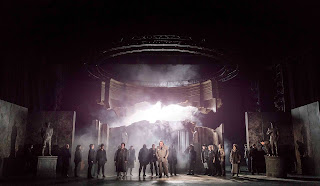 The end of Act I in particular - where great disaster befalls Leontes as he loses his wife and son, then banishes the daughter he doesn't believe is his - was utterly nerve-jangling, with the mighty ENO chorus on audibly intimidating form, ratcheting up the intensity with every line. The score (conducted by the composer) was a co-conspirator - at one crisis point, when I thought I'd reached my limits of excitement and unease, a drum-kit jazz break burst into life, pushing me further towards the edge.

The production as a whole brandished a cruel wit in keeping with the story's dark tone. Statues to the king's vanity foreshadowed the image of the queen Hermione that will mercifully come to life at the opera's close. Shakespearean purists may have been disappointed that Antigonus didn't 'Exit, pursued by a bear' - except that as he retreats from the Bohemian cost, the stars of the Plough - 'Ursa Major' - twinkle above him. In a nice casting touch, the superb Neal Davies sang both Antigonus and the role of the Shepherd, as if he never actually gave up his duty of care to Perdita at all.

Iain Paterson - who gave such a tremendous performance as Hans Sachs in the recent ENO 'Mastersingers' - was on blistering form as Leontes, showing how monumental anger can give way to all-consuming grief. The whole cast in fact - Samantha Price and Anthony Gregory endearing as the young lovers, Leigh Melrose as Polixenes - who comes so close in his own rage to repeating Leontes's mistakes, and Sophie Bevan as a wounded, defiant Hermione - all in terrific voice, but at the same time, clearly directed with as much attention to acting as singing. As a result, we experienced something very raw and immediate: human, domestic emotion under attack from enigma, coincidence and magic.

If 'The Winter's Tale' showed us the questing, challenging, 'contemporary' ENO, then 'Partenope' gave us its irreverent capacity to innovate and delight. This production places Handel's soldier-queen into Paris of the twenties, highlighting that the opera is surely far more concerned with matters of the boudoir than the battlefield.

It allows for some brilliant commentary on the costume and cross-dressing: Partenope dominant in top hat and tails; a woman playing a man in a 'trouser' role (Arsace), alongside a woman playing a woman playing a man (Rosmira). Emilio, the invader/observer, is styled as the photographer Man Ray, whose surreal aesthetic gave the staging much of its beauty and humour: from the use of masks (not just as symbols for concealed identities, but also a kind of protection and reluctance to engage), to the 'big reveal' as Emilio's nude photo helps Arsace to realise how to, er, expose Rosmira...

The six-strong ensemble were all at perfect ease in their roles. Sarah Tynan was an electric, exquisite Partenope, nonchalantly prompting everyone else in the opera to fall head over heels for her; Rupert Charlesworth combining a really powerful vocal presence with a clever, consistent and edgily comic demeanour as Emilio. The women in drag were both wonderful: I'm in awe of Patricia Bardon's versatility (having seen her before as the Princess in 'Suor Angelica' and in the lead role in John Adams's 'The Gospel According to the Other Mary'), here as the torn Arsace, and Stephanie Windsor Lewis seemed to be having the time of her life as Rosmira, in disguise as the bluff and at times heroically sweary Eurimine. Matthew Durkan as Ormonte and James Laing as Armindo were winning foils, with the latter in particular squaring up to some demanding physical comedy - including delivery of a key aria while hanging from a staircase.

While it will be hard to handle the ENO withdrawal symptoms, I should add here that there are other opportunities between now and next season to hear the great chorus and orchestra in action.
I've focused on company performances here but there's still more - from Silent Opera's Janacek adaptation to a new work about jazz giant Charlie Parker at the Hackney Empire - so please take a look at ENO's website and support them if you can.