I realise that I'm very lucky to be able to say this - but I've enjoyed a run of activity lately which, once you factor in all the other work/life stuff, has meant that I've been to see and hear things faster than I've been able to write them up. I'm conscious there's a bit of a backlog building... so please forgive me if I go back in time a few weeks or so to tell you about a couple of great concerts I heard at the Wigmore Hall.

Both were song recitals, both shorter programmes performed without intervals, and both featured the same pianist, Gary Matthewman. That aside, though (and this is testament to GM's versatility), the experiences could not have been more different.

The first was a highly unconventional performance of Schubert's great song cycle 'Winterreise', with bass Matthew Rose in the lovelorn wanderer role. MR and GM have already released their interpretation of 'Winterreise' on disc - a desirable artefact, not just because it's such a sensitive recording, but also a beautiful object in itself. I mention this because, live, the rendition gained an extra dimension as the duo collaborated with artist Victoria Crowe (whose paintings adorn the CD package) and designer/video-maker Kenneth Gray to create an animated film that played 'in sync' throughout the entire 70-odd minutes of the cycle's duration. 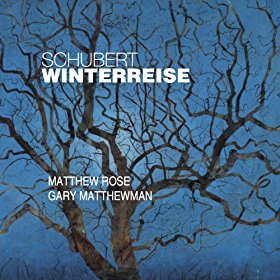 I've never seen anything like this at the Wigmore. It's amazing how we just become used to song recitals running in a certain way - singer in the centre, pianist a little to the left, lights left up a little so we can choose to bury our heads in the song text... Not this time. We were in near-darkness, the performers right over to the side of the stage to give us the clearest view possible of the visuals. Although I've reached a point where I know 'Winterreise' quite well now, I wouldn't say I had anything like a complete translation lodged in my brain. But this offered a totally new way to experience it - the music guides you through the emotional twists and turns of the story, as you lose yourself in the perfectly timed images.

I've thought Matthew Rose superbly convincing in any setting I've encountered him in - recital, sacred music or opera: most recently, he shone as a highly complex, hilarious yet vulnerable Ochs in the recent Royal Opera House 'Rosenkavalier'. However, he does not 'grandstand' as a performer, immersing himself wholly to produce exactly what's needed in service of the piece, or role. Here, he was all but invisible to the audience, allowing us to focus on his voice alone, strangely 'disembodied' in these conditions. But - and I may be alone in this - there is something about listening to 'Winterreise' for the bass voice. Somewhere, when it is sung and played 'higher up', it feels like it lets in more air, but something about the combination of the 'wide', rich lower notes seems to increase the intensity for me - a more dense, claustrophobic sound. MR was truly impassioned, articulating every mood swing and providing the most chilling, resoundingly terrifying close to the cycle I've heard to date. Experimental, then, but utterly sure-footed: a confident step forward into a new way of hearing - and seeing - an established classic.

Fast forward to a few days later, and a Sunday afternoon recital with GM accompanying soprano Louise Alder. This was the kind of gig where a personality lights up a room. Here's the programme (apologies for the authentic 'on-the-train-home' bendiness of the photo - it's as if you're actually there!): 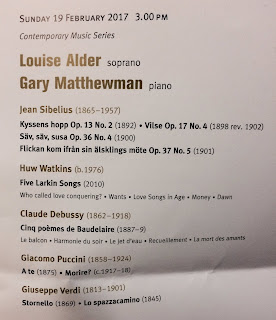 After hearing LA for this all-too-brief hour, I could have happily sat there and kept listening for the rest of the day. Clearly, the selections were calibrated and balanced for maximum delight. Seasoned Specs readers may not be surprised to learn that the Debussy songs were my personal highlight, but part of the concert's overall joy was being carried through this range of fascinating material in such pleasurable company.

In contrast to the wanderer in 'Winterreise', locked into perhaps permanent, frost-bitten darkness - in Louise Alder's programme, we broadly edged our way into the light. From Sibelius's 'Nordic noir', through Larkin's grey repression captured in gripping settings by Huw Watkins, we travel through Debussy's ever-elusive middle ground into the colourful, characterful songs of operatic titans Puccini and Verdi.

LA is a member of Frankfurt's Opera Ensemble, so it's perhaps no wonder that, while her shining tone effortlessly resounded across the Wigmore acoustic throughout, she brought her acting skills to bear on every number, upbeat or downcast. Visibly adjusting her persona between songs, and even verses - she made each selection its own mini-drama. The sequence allowed for more light-hearted antics towards the recital's close, and sent us out into the afternoon in buoyant mood.

It's also no surprise that LA is currently a finalist for the 2017 Opera Awards 'Young Singer', as well as this year's Cardiff Singer of the World. Best of luck to her in both, and we should only hear more and more of her - thank goodness.