If you're London way, there is still just time to catch two vastly different, but equally dazzling, exhibitions: William Eggleston's Portraits (at the National Portrait Gallery for another week) and Georgia O'Keeffe (at Tate Modern until 30 October). I haven't managed to write about these nearly as quickly as I'd hoped - but I still thought them worth drawing to your attention, since the book accompanying the Eggleston photographs in particular is well worth your time.

Eggleston is, in my opinion, rightly celebrated for his impassive gaze at Americana, and I can see why he's been compared to, say, Hopper in achieving that sense of detached melancholy (in film rather than paint, of course). WE does not confine himself to photographing only people - far from it. But as regular Specs perusers will know, portrait photography is something I'm very fond of doing myself, so the opportunity to see a large amount of his work in this genre and gain some inspiration from it was irresistible.

Photograph an empty location, and you can capture stillness. But once people are in there, movement or change is always implied - there cannot be total disengagement. The two 'forces' going on in many of these pictures, then - WE's apparent 'attempt' (deliberately subverted, I'm sure) to shoot his subjects with the same coolness as his landscape work, and the simple fact of their energy and presence pushing against this - make for a wonderful tension. If anything, I thought of film-makers: the saturated false normality of Lynch, or the eerie symmetry of Kubrick.

Take the shot below. At first glance, it's tempting almost to laugh at the old-fashioned hairstyle and see the photo as almost satirical, condescending. But that tight vertical line of focus shows the similarity of the grips and the necklace. Geometry is in evidence everywhere here - follow the lines from the corners of the near seat, through the corners of the far seat, to the 'corners' of the hairdo. The friends/couple are merged into one shape, making two opposite triangles, giving them a deep connection without ever needing to reveal their faces. The only thing breaking this balance is that the two cigarettes (both somehow 'equally' out of focus) mirror each other 'into' rather than across the picture, lending the subjects an even stronger link. 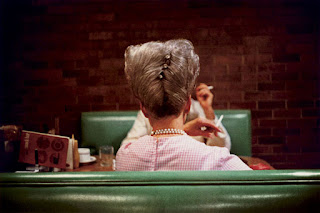 For an extraordinary marriage between people and their surroundings, I'd be hard pressed to find a more eloquent example than the next photo. The loyal manservant falls naturally into the body language used by his boss. But notice how the men are echoed by the pairs of trees receding into the distance to the right - particularly the closer pair suggesting the one on the right is the sturdier of the two. I'm also struck by how there are only really three colours in the photo - the inescapable black/white contrast picked up in the car and its radiator, the house in the distance, the clothing... and all else is an autumnal shade, as if this situation is transitory: the white man's skin in fact the same ruddy brown of the leaves, earth and even the water. 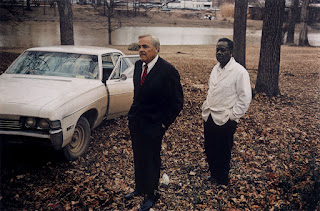 From image to image, I just found myself marvelling at the photographer's eye. His seemingly instinctive way of capturing people at exactly the right time and place even allowed for some gentle humour: the girl in the back of a car, placed so accurately that the windows of the car spread out behind her like angel wings - but in a perfect inversion of the shape of her curved specs. Or, in one of my favourites from the whole exhibition (below), an early shot of a man about to cross the road, near a STOP sign. But the man also is the STOP sign in human form - the timing is such that his awkwardly raised leg, mid-gait, puts his rigid frame at the same slightly-skewed angle. 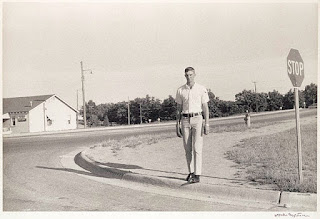 Sometimes Eggleston's self-removal is problematic - the photograph of his girlfriend in tears, staring accusingly down the camera lens, is uncomfortable and unforgettable - and we occasionally feel like we're witnessing scenes we perhaps shouldn't. But in a way, I'm glad that someone who seems to have lived a life at the edges, quietly observing, is also capable of edginess - otherwise it would be easy to believe he has somehow moved among us completely unnoticed, leaving no trace but his photos. One of the most thought-provoking and involving exhibitions I've seen in years.

After these smaller-scale wonders, Georgia O'Keeffe's paintings came as a kind of blissed-out, sensory overload. I had perhaps the same pre-conception of O'Keeffe as many others - I knew her name, and of her importance, but the only pictures I really knew about were the large flowers. Much like this one: 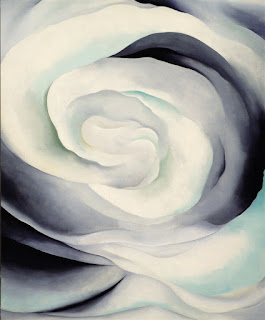 So, one of the glories of the Tate's exhibition is its ambitious scope - GO'K's whole lifetime is covered, and the outsize flora take their place as part of her never-ending cycle of artistic development.

I will get one thing off my chest about the 'hang', so to speak - or perhaps, more accurately, the curation. GO'K's quotation "Men put me down as the best woman painter... I think I'm one of the best painters" features prominently on the posters - and it's been assembled by two women. So, while being aware that as a chap, this is not my field of expertise or comfort zone, I was expecting a full-on feminist, celebratory approach of Keeffe's originality and brilliance. I wasn't expecting quite so much focus on her husband, Alfred Stieglitz, photographer and artistic mover/shaker. Clearly, they were important to each other, but after a few rooms, I was finding Stieglitz to be something of an annoyance. For example, while O'Keeffe seems to have willingly acted as his muse, did we really need to see so many of his photos of her - isn't that his work? Or the fact that they both produced city scapes (like the painting below) is surely not cast-iron evidence that he was an inescapable influence, but rather a natural outcome of the fact they both lived in a city. Worse, he apparently perpetuated and galvanised the tendency of critics to see G'OK's work as erotic, irritating her no end. I don't want him airbrushed completely out of her story, but I resented his material taking up space that could have been given to more of hers. 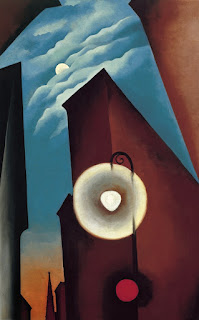 It seems to me that O'Keeffe's work is more about the sensory, rather than the sensual - the paintings suggest heightened levels of experience, rather than contrived layers of meaning. Some of the most breathtaking pieces early on in the exhibition are her abstracts inspired by music: communicating what synaesthesia (the condition that allows people to experience a stimulation 'across' the senses - for example, to see music as colours or shapes) might actually be like for those of us in the relative dark. And the famous large-scale flowers - which were also subject to the 'sexual' over-simplification - in fact force the viewer to engage with the plants' beauty and intricacy to a hyper-real extent, since it would be impossible to experience the bloom in such overwhelming dimensions in the wild.


As time went on and O'Keeffe moved herself physically further into nature - initially the rural Lake George area of New York State and ultimately her extended stays in New Mexico - the art became not so much surreal as more totemic, emblematic. The exhibition finds room for her skulls and bones, shown almost levitating against the bright landscape, like bleached-out, sun-drenched vanitas still lifes... contrasting with her 'Black Place' paintings of remote, monochrome hills. Telling details zap you like lightning bolts from her abstract work - as below, where the interlocked sections of bone are echoed by the fissures in the distant rock face. 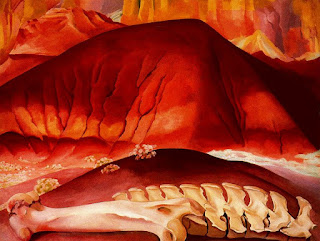 One of my own favourite paintings is far less elemental. But this East River view, I think, combines so many features of her greatness. I love the way the entire view is slightly slanted left, as our eye rarely sees everything as totally flush and horizontal. The buildings, while totally realistic, strike us as a pattern of recurrent, near-regular shapes, seemingly with the potential to repeat and regenerate for ever. And her billowing clouds are present in the smoke pouring from the funnels and chimneys. In the haze, the hue of the open land far off picks up the colour of the water. I couldn't tell you how long I stood transfixed, staring into this. 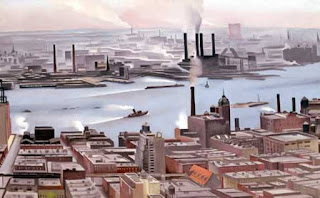 Two artists utterly poles apart in attitude and approach: disinterested observation versus deep engagement. But both seem to arrive at the same instruction - stop, and look more closely.