Cross purposes: 'Norma' at the ROH

Bellini's opera 'Norma' is justifiably famous for at least two reasons: as one of the most highly-regarded works in the 'bel canto' genre (an especially florid style of Italian singing - gorgeousness almost for its own sake), and having, in the title role, one of the most demanding parts in the entire repertoire.

The new production of 'Norma' at the Royal Opera House had already made the headlines long before the actual run. Anna Netrebko withdrew from debuting in the role about a month after the season was announced. However, within a week or so, Sonya Yoncheva - also taking on Norma for the first time - had been cast in her place. This generated a bit of 'BUT IS SHE A NORMA?'-style speculation (surely it's the same with any new incumbent of this particular role). But as someone who is happiest when their corner of social media is in 'polite' mode, I was really pleased to find that most reactions I saw to SY's involvement were of curious, optimistic interest.

I was excited, too, because I knew SY only through her lovely album 'Paris, mon amour' - I'd never heard her live on stage. And I was particularly intrigued by the swift return to the ROH of director Àlex Ollé (of La Fura dels Baus, the troupe behind the brilliant recent production of Enescu's 'Oedipe', which I wrote about here).

To canter briefly through the plot... the Romans have occupied Gaul. The Druids are governed by a kind of first family, namely Oroveso, their chief, and his daughter Norma, their high priestess. These aren't the chilled-out hippy Druids you'd expect to find hanging around Stonehenge; in fact, under Oroveso's leadership, they are itching to make war on the invaders. Norma advocates peace, not least because she has had two children on the quiet with a Roman lover, Pollione.

Pollione, card-carrying complete bastard, has actually transferred his affections to another, junior priestess called Adalgisa. Adalgisa puts up some resistance, but ultimately agrees to leave with Pollione. However, she feels the need to explain her impending departure to Norma. The truth comes out just as Pollione turns up to collect Adalgisa, and there is, of course, an almighty dust-up. Both women are furious to find out about Pollione's deception - so he leaves by himself. But Norma's rage is apocalyptic.

She comes very close to killing their children in a Medea-like act of revenge, but stops herself. Adalgisa returns to her vows after failing to persuade Pollione to come back to Norma - at which point things, as they say, escalate quickly. Hearing that the Romans plan to take Adalgisa back by force, Norma stirs the Druids up to war. Pollione is arrested and brought in after being caught breaking back into the temple. As a sacrificial victim is needed for the war ceremony, Norma shocks the entire ensemble by revealing her secret - including her children, for the first time, to hands-off granddad Oroveso - and proclaiming herself as the offering. She dies with Pollione on the pyre.

High octane stuff. But - as a 'bel canto' high watermark - however sorry or tense the situation, it's all underpinned by utterly gorgeous music. If, like me, you're a bit more used to later opera where the orchestra tends to track the mood of the action more closely, it can at times seem a little surreal or ironic, as if the score has passed through music written since and out the other side.

But of course, it's neither of those things. As the convention of the time, it would not have had this strangeness-in-hindsight. And the cast, playing it completely straight, bring out a total sincerity. Somehow, the loveliness of the melodies makes it more unbearable that this is happening to these people. Norma has a rightly-celebrated solo aria 'Casta diva', where she prays for peace. But for me, this was possibly surpassed by the writing for duet and trio near the end of Act I - where first, Adalgisa's confession and Norma's compassion ripple over each other until realisation dawns, then - once Pollione turns up - their fury erupts, but in sublimely intertwined lines: as any two voices fall back, the third fills the gap to take its place in the argument.

Sonya Yoncheva was magnificent. No problem supplying the seemingly effortless beauty in the voice, but also dominant and commanding when necessary. I was convinced by the body language and attitude that this was someone who could control and influence a mob. She gave the character moments of fearsome physicality - a cry of rage at the exact moment the lights went out on Act 1, and later on, an unchecked assault on a gong, when in war mode. The supporting cast were all on form, too. Sonia Ganassi (apparently performing with a cold; still great) brought out the initially weak and anguished Adalgisa's latent grit, and Joseph Calleja was suitably thuggish as arch-git Pollione - terrific sound, but if I had to change one thing, I'd get him to interact with the other characters more, rather than declaim outwards quite so much. (This, of course, could have been how he was directed.)

I was also hugely impressed by the staging and production. The forest, gleaming in darkness, seems very strange and stylised, until you realise the trees are made entirely of what must be hundreds of crucifixes. (A chilling realisation of how the wood is described by Pollione and his friend Flavio as evil, containing death.) The 'Druids' in this production are definitely being aligned with Christianity - it's hard to miss the comment on aggression/repression in contemporary religion - but the specifics are nicely blurred: the swinging censer and tree-crucifixes might suggest Catholicism but if so - Norma and Adalgisa would not be priests. 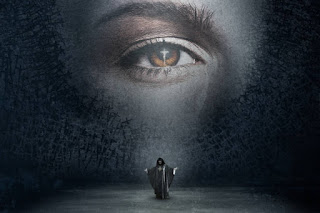 Ollé revisits some of the time-shift concepts that helped make his 'Oedipe' production so fascinating. In the first half, the characters wear vaguely recent/contemporary military and clerical garb... but after the interval, Norma's children are shown in an ultra-modern flat, with 'Watership Down' on the TV (as if these kids aren't traumatised enough!) and a spacehopper taking centre-stage. Church and state seem to blur further as Norma and Adalgisa appear in business-like trouser suits, religion and war now a matter of admin - of getting things done.

To me, this meant that every aspect of the opera carried a tension between what things 'ought to be', and what they are. I've already mentioned the way the divine music can seem a mismatch for the ugly subject matter, and Ollé's overall production looks to that model. All the individual elements we see make sense: the costumes, the props, the locations... but they only 'add up' in the opera's alternative universe where we find ourselves. We can absorb the critique of today's society, without missing out on that wave of escapism opera gives us, as a modern audience.

The final image of the production is an astonishing coup de theatre, as the partially-hidden sacrificial pyre itself takes the shape of a stage-high burning cross - queasily reminding the audience of the Druid's KKK-style headgear and finally igniting the underlying theme of where fundamentalist rule inevitably leads: to death. And more than that, to death of the innocent.

An evening of real depth and power, stunningly performed and realised.