I don't know if this is the 'Proms effect', but in the last week or so, it seems the old 'classical music' debates have been rearing their ugly heads again. You know the kind of thing. Is it elitist? (Or if it isn't, why are we dumbing it down?) Why aren't young people listening to it? (Or if they are, why aren't more young people listening to it?) Why doesn't any modern classical music have tunes? (Or if some of it does, why doesn't the rest have tunes?)

The two key pieces brought to my attention were:
I don't especially want to take issue with either Hough or Johnson here ... In the most benign way, I don't really care what they said, and in both cases, their actual speech or copy will have been filtered, edited or reported. What bothers me is that they are now part of this ongoing churn of clichéd non-arguments which - in the media's apparent determination to reduce EVERYTHING to 'this-or-that' / 'one-or-the-other' positions - "WHOSE SIDE ARE YOU ON?" - means arts coverage will sound more and more like the strident haranguing tone we're already subject to in, say, political or sports commentary. If you don't like Corbyn* (*catchy tunes), you must be a closet Blairite Red Tory conspiracist** (**pretentious chin-stroking hipster sonic tourist).

I really lament the current tendency to discuss topics in a 'bubble', stripping them of context and lessening their meaning. To take a whistle-stop tour of some of the issues relevant to classical music...

Modern classical music has no tunes.
On one level, this is simply untrue: to take a perhaps provocative example, the Einaudi/Jenkins 'popular classical' phenomena is totally to do with tunes, and whether or not to one's taste, it's needlessly divisive to pretend that these writers are somehow less 'serious'. But Johnson's piece theorises that contemporary composers have always gone for forbidding, avant-garde style music to seem fearless, current, vital - as well as to guarantee support from the establishment. Well - it might also be worth mentioning that before the early 20th century, what we now regard as western classical music encompassed all of our 'music needs' - improvisation, popular song, musical drama. Advances in travel and technology then meant that music (as well as the other arts) widened out in a truly unprecedented way: access to jazz, world music, folk music from every nation, the birth of rock and pop thanks to electric instruments and recording facilities ... the role of acoustic/orchestral music - suddenly its 'own thing' - was bound to change, and rightly so. 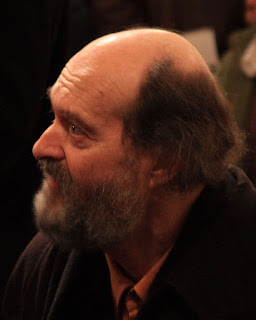 (Photo of Arvo Pärt taken from Wikipedia page - could not see credit.)

I realise that I'm inevitably simplifying, too - but the point I'm making is that classical music as we know it now is a natural field for innovation and experimentation. Johnson laments that people might listen to Coldplay rather than new classical for relaxation - but why shouldn't they? For people that want easy listening, we actually have 'easy listening'. I can fully understand why many classical composers of today want to find the alternative space to all the other 'musics' now readily accessible, and I'm happy to follow them there. I'm particularly happy when it comes to modern composers like Pärt and Tavener, who find beauty in harmony or even silence ... or the 'minimalists' like Glass and Adams, who acknowledge two-way influences back from rock, jazz and world music in a classical framework. (Remember how many composers long before these broke barriers in ways that seemed unthinkable at the time, but are accepted now, even when still challenging.)

Short attention spans in our youth.
Different people have different attention spans, whatever their age. I'm uncomfortable with people assuming that, if the dreaded 'dumbing down' is going on, it must be because of these pesky youngsters. I'm not an expert on teens, but year by year, I'm becoming extremely well-informed about middle-age: and I can say this, for certain: 'our generation', who still grew up in a world largely without internet, mobiles and so on, did not have the same riot of information competing simultaneously for our brain cells as today's kids do. It seems to me that the 'youth of today', if anything, are adapting to absorb knowledge faster and with more dexterity than we ever had to - and this is still all at a time when minds and bodies are changing and emotional, let alone academic, responses to the arts are still in flux. So, if you want to shorten your concert, shorten it. But don't pretend it's because the young can't cope with all those notes.

Linked to the 'attention span' issue is the myth that...

You can fix the problem scientifically.
I find this idea that an 'ideal' concert would be 60, 75 or 90 minutes a little odd - certainly as a starting point for programming. It's rather like buying a bookcase and then deciding that the exact number of books you need is the amount you can fit in the shelves. Design a programme that works, and the audience's interest will last the duration. For (an extreme) example, Yo Yo Ma played all six Bach cello suites in sequence, with no interval, at the 2015 Proms, with the 'endurance' aspect - and the promise of a near-trance like state within the venue - a major selling point. Equally - staying with the Proms - certain works, like chamber pieces, or music linked to other genres, tend to be shorter, so programme themselves nicely into the shorter lunchtime and late-night Proms. Not the other way round.

Again, it's useful to look at what happens in these other genres. Bruce Springsteen - to deliberately take a specimen from the rock world who can't be linked only with 'the young' - routinely plays gigs of around three hours. His music sounds epic, so concert-goers like the experience itself to be epic as well. Very few fans will come away thinking 'I wish he'd done about a third of that' - and most of them will have been on their feet for the duration, too. Jazz or world concerts may have a more manageable overall length - but no-one has an attention-deficit or fatigue-related problem with individual tracks being stretched out, extended and explored to far greater lengths than the recorded versions. Essentially: if you do what sounds, and feels, right, the audience will go with you. 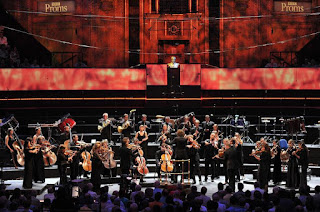 (Photo of Aurora Orchestra from their website, taken by Chris Christodoulou.)

I would love to see a classical ensemble master a range of repertoire, then tour. Each night, they could construct a set-list, just like other bands do, and keep the experience varied and vibrant for both themselves and the audience. You can see the seeds of this in the work of outfits like the Aurora Orchestra, who have already attracted attention through performing spontaneously, and from memory - not to mention the varied programming on their CDs.

It would also be great to see some of the artists I regularly write about - like Jo Quail and Matt Howden (a.k.a. Sieben) - to receive wider recognition from the mainstream for mixing orchestral and electronic composition in increasingly original ways. (Artists like Anna Meredith, who composes acoustic classical music while making electronica records, could pave the way for this.)

And while we're working on a wish-list: why can't we get the media to show a bit of innovation, or at least some flexibility, themselves? For example, we have this extraordinary situation where 'Later' is the only regular music show on television, yet during the Proms, 'Proms Extra' - which really is a 45-minute classical programme with excellent host and guests - broadcasts every week. Surely if the audience is there during the Proms, it will still be there the rest of the year (when bereft of actual Proms on radio or TV). Or there's the laudable 'Late Junction' on BBC Radio 3 which covers a huge range of music - why note create a similar show, or 'simulcast' it on BBC Radio 6 Music, too - which has a kind of 'mirror remit' for listeners more steeped in pop and rock?

Classical music is only as elitist, forbidding or demanding as we keep being told it is. The media (social or otherwise) is nodding smugly to some and being patronising and dismissive towards others. For now, you really have to do the exploring and listening for yourself - and I know you will.