Keeping the cold in: 'Voices of the Winter Hearth'

I wanted to write a few words about a terrific event I visited last Friday. As happens so often, there's a mild thread of guilt running through the lines of this blog post, as the exhibition I'll be describing is now over. However, some of its key elements endure, so well worth drawing to your attention all the same.

The show itself was called 'Voices of the Winter Hearth', installed in the belfry at the top of a spiral stairwell in St John on Bethnal Green, London. Curated by Joanna Vale and Renaud C Haslan, and bringing JV's poetry together with work from RCH and a collective of like-minded artists, it was a sequel of sorts to their first exhibition at St John's just over a year ago, 'Tales from the Autumn House'. To commemorate the final day on both occasions, cellist Jo Quail was asked to put together a programme to add sound to the already multi-media experience.

Regular readers of the Specs blog (thank you, darlings, thank you) will know how highly I rate Jo Quail's music, and indeed it was through wanting to hear her live in an acoustic setting that I came along to the autumn exhibition in the first place. Then, she performed in the actual stairwell with the audience curving round above her: the result spellbinding as ever, in its beauty and strangeness. This time, the performance would be candle-lit, in the main area of the church, as she had called in reinforcements in the shape of Robyn Sellman and Laura Lee Tanner, singers in the brilliantly versatile electro-classical band Autorotation.

I arrived ahead of time to look at the exhibition before the music started. The first incredible thing to note is just how perfect the location is for a display like this. The higher you ascend, the dimmer the light, and you experience a kind of increasing 'visual chill', until you get to the very top and realise the room itself is in near-darkness. As JV later explained to the audience, the aim was to conjure up an atmosphere of winter as our ancestors experienced it: no artificial light or heat, remote, even intimidating. What they might have seen and felt is brought to life in the chillingly vibrant art - I particularly liked RCH's work (the 'Estonian Church' below), the haunting photography of Asia Schmidt, and Sarah Turpin's otherworldly illustrations. These images below are from the event Facebook page (link below) - photos, top to bottom, by Olga D Kay, Marcus Tylor and Renaud C Haslan. 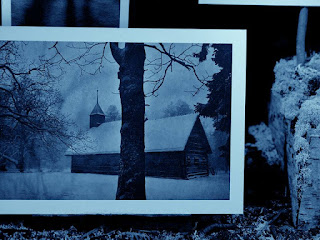 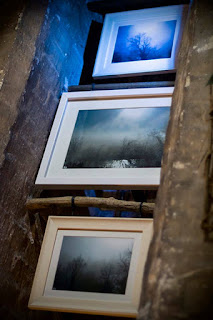 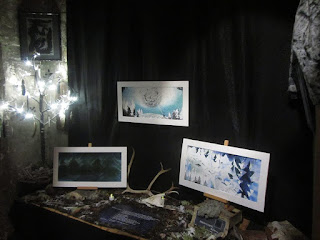 JV's evocative poetry, itself image-rich, was appropriately displayed as art among the pictures, representing the mythological/folkloric tales that would've been exchanged over food and fire by our forebears. Using a heightened, densely-packed language, the verse made you feel the power of a saga or epic condensed into a handful of lines - I'm still thinking of ravens as 'ragged black flags', and probably always will

The installation was also 'total', earth and branches underfoot, barely-lit - again, replicating conditions from literally darker ages. To appreciate what you were seeing properly, you had to take the time for your eyes to adjust, or go back and look at certain images or words again. I feel that the word 'interactive' is over-used now, to the point where anything electronic, or where you have to push a button or click a link might qualify for the tag. But this experience was truly interactive - you had to accommodate the exhibition physically, as much as it accommodated you: not only waiting for your eyes to adapt, but peering closely at almost hidden objects, leaning into constricted spaces. Treasures were not simply laid out before you, but instead, waited to be discovered.

It's a joy to see several disciplines combine to make such a satisfying whole: along with the words, the art featured paint, print, collage, photography, 3D work - and the eerie dusk of the hang meant that it wasn't always immediately obvious what was what. The last night's music only enhanced this effect.

The church itself was candlelit around the stage/choir area for the performance. Jo Q started the evening solo, with a performance of Bach's D minor Cello Suite. It is always a pleasure to hear JQ play Bach, and the suites have long taken up residence in her soul as well as her hands. But the cyclical, flowing lines of the Bach, spread like tree roots from the earthy, wooden tone of the cello made it the perfect choice for an exhibition concerned with myth and mystery - when even elements of the creation and purpose of the suites themselves remain uncertain, and for years they were all but unknown, until their re-discovery in the 20th century.

Then Robyn and Laura from Autorotation joined JQ on stage to bring all the various aspects of the exhibition together. They had created musical settings - allowing the performance to be part-composed, part-improvised - for four of JV's poems, to piano and cello accompaniment. Gorgeous piano hooks courtesy of Robyn (which again featured some appropriate dischord/resolution cycles to match the seasonal theme), punctuated by seemingly spontaneous but precision-accurate cello from Jo - from bass line, to melody, to sound effects ... all helped underpin Laura's virtuoso vocal delivery, from perfectly-articulated and audible spoken word to a wolf howling - in tune - and all points in between.

The sequence of songs was so arresting, that it made me greedy for more. There is of course a rich tradition of classical art song, taking fully-fledged stand-alone poetry and setting it to music - one could look back to Schubert and his dramatisations of the otherworldly in his lieder... or perhaps only as far - and closer to home - as Britten's numerous folk song treatments. It would be lovely to see these musicians take this forward and allow JV's words to leap even further from the page than they do already.

The evening closed with the beautiful 'Between the Waves', from JQ's forthcoming album, its oceanic grandeur enhanced by Robyn and Laura's abstract vocals - performed on the night for the first time! This is one of my favourite things about JQ in a live setting: tunes are always living, evolving creatures, developed and developing in performance. I have never known her miss an opportunity to involve other musicians to re-interpret or collaborate on new incarnations of pieces - often improvised, just to see what they will bring to the sound, or where the overall enterprise will take them both. (In fact, Autorotation have a nifty track record for doing this, too - and the mutual appreciation between them and JQ has led to some brilliant gigs.)

So - for all the remarkable individual talents on display, the final evening of 'Voices of the Winter Hearth' showed how much artists of all kinds have to offer each other in collaboration, and that in joining forces to bring the past alive, point the way towards countless possible futures.

For those of you who'd like to find out more:

St John on Bethnal Green is a magnificent venue (designed by Sir John Soane), and an established hub for the arts - not to mention the satisfyingly well-stocked bar on event evenings. It contains the specially-commissioned and unforgettably haunting 'Stations of the Cross' paintings by Chris Gollon, in themselves an absolute must-see.

Here is Jo Quail's website ... or if you are on an unstoppable, and understandable, quest to hear her most recent music as quickly as possible, her Bandcamp page contains an exclusive version of 'Gold' from her forthcoming record, and the 20-minute masterpiece for strings, percussion and choir, 'This Path with Grace'.

And here you can find all things Autorotation - including a very handy Soundcloud jukebox. Their back catalogue is also available at very reasonable prices on Bandcamp, so don't tarry...

The 'Voices of the Winter Hearth' Facebook page is still up, with more photos and info about JV's work and the collective of artists who took part.