Chorus lines: speaking up for the arts (again)

At the time of writing, London opera has been enjoying - or rather, enduring - another few headline-making days. Seemingly a plague on both our houses. At the financially-embattled English National Opera, talk of cuts to the chorus, and a reduced number of productions - while over at the Royal Opera House, director of opera Kasper Holten announced he would be leaving in 2017 to return with his family to Copenhagen.

I'm sad to see Holten go - I'm an admirer of his work and it feels a little like he's just getting started. Of course, opera productions take years to plan - so in his 'early days', like any new arrival to a similar post, he was overseeing many of his predecessor's plans come to fruition. To all intents and purposes, he really is only on the point of making his mark. (Emphatically so, with the magnificent 'Krol Roger' this year.) In turn, even after he steps down, his legacy will last until around 2020. I really think he's a force for good, and am looking forward to seeing what plans he has in store for the next few years.

In contrast to what will hopefully be a smooth transition at ROH, ENO seems beset by turmoil. Famous musical and operatic names have rounded on the apparent proposals, only for ENO to respond rather vaguely about necessary cuts; effectively, thanks for your input etc - that's all very well but you don't have to solve the problem. (You can read the Telegraph's piece about this here.)

I don't have The Answers, of course. I so wish I did. But I do have some questions. It seems to me (and many others, I believe) that the only folk really likely to suffer from this are the singers and players - and I am with them. Excuse my naivety in putting some of these thoughts out there, when I know relatively little about 'business' - but then we're living in a world where business people who know nothing about talent or creativity make decisions that affect artists' lives.

Apparently, ENO's 'management team' will take 'several months' to work through these proposals and come to a decision...

I'm quite sure that corporate types could tell me why any or all of this wouldn't work. To a certain extent, I don't care. If you're management experts, think innovatively and make some of it work. From a creative perspective, I can tell you what definitely won't work: reducing the chorus. (I can live with the idea of fewer productions, if it creates an atmosphere free of financial stress for those working on them, and longer runs for those shows, giving more people a chance to go.) 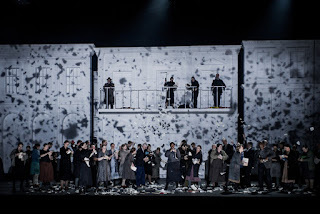 (This photo is of the ENO production of Verdi's 'The Force of Destiny' - taken by Robert Workman.)

Forgive me for getting a bit emotional about ENO's chorus - but they are recognised as one of the finest ensembles of their kind, in the world (as testified by their shortlist place in the 2015 International Opera Awards). They don't just have the power - they have a group subtlety and company bond that makes them particularly good at establishing joint character, whether an intimidating crowd or heavenly choir. They all - all of them - act, all the time... and this has stood some of them in good stead as they've more than adequately covered for absent soloists, or taken on a more individual role in the action.

If you had the world's finest thoroughbred racehorse or sports car at your disposal but needed to trim your belt, you wouldn't lop off a leg or a wheel. Yes, you'd save some cash with no more travel to all those pesky meetings or venues ... but you might also find that the ability of your prized possession to do its job properly and maintain not just its, but your, reputation has been somewhat hampered. Was it you tearing round that course or track? No.

I realise there is more than one way to 'cut' a workforce. You can shorten hours or contracts if you don't want to reduce actual numbers. I would say, however, that applying anything like this to ENO's singers (or players) would be stupidity. That sound does not come from a casual approach - it's from constant, regular, intimate practice, rehearsal and performance, developed over time. And that sound will resonate, I'm afraid, how ever many managers come and go in the meantime.

I'm reminded a little of what we keep reading about the BBC. God knows, it needs a structural shake-up but the only solution we ever seem to hear about are cuts to programmes and channels - in other words, targeting the programme-makers - the people who in fact make the Beeb the beacon of quality it is - instead of the internal machinery. And the BBC has an part-educational remit bound up in its State support - I think it's all too easily forgotten that ENO was created in a similar spirit, bringing English-language versions to as wide an audience as possible. Whatever beef the Arts Council have with ENO over funding and management issues, it would have done well to consider the organisation's wider aims that matter somewhat more than instant profit.

This whole affair ultimately made me think about art and music, and how we relate to them. I was saddened, for example, to see some of the callous social media traffic following both Holten's announcement and the ENO story. Obviously, there were lovely messages of support. But - 5... 4... 3... 2... 1 - and out they came: never been impressed ... surprised he was asked to stay that long ... what would we miss if they went altogether? ... well, I never liked [insert person/production of choice] anyway...

Gather round, you lot. That's enough. Time to shut up.

Many of us tweet, post and blog - and within the context of a review or critique, we're perfectly within our rights to make constructive as well as positive comments and be honest about our reaction to something. (I rarely post negatively, I realise that - but that's my choice.) Could I suggest, however, that outside that environment, and against a background where these people - the ones that work incredibly hard to provide those hours of entertainment that you so casually dismiss, often in fewer than 140 characters - are facing real uncertainty and pressure ... you simply put a lid on it? Thank you.

We're in a situation where more than anything, we should demonstrate not just support, but also kindness and appreciation for our singers, musicians, or any type of artist. The arts are for us: they enrich our lives, widen our horizons, release our emotions and stimulate our soul to make us more than machines. But this is not about us - for once, this is about them, the creators, who fall victim to the most astonishing thoughtlessness from the corporate world, the political arena, right through to the booing louts in audiences and armchair attacks from the cyber-lazy.

It's time for us fans and patrons of the arts to say, loud and clear: they are as vital to our quality of life and wellbeing as healthcare, education, or any other indispensable service you care to name. These people, and what they do, are precious: imagine life without them, and the effect that would have on you... then speak and act accordingly.