Mrs Specs and I have just enjoyed a fortnight’s holiday in the beautiful Engadine region of Switzerland. Our base was Zuoz, a village along the railway route connecting Schuol-Tarasp (like a number of similar stops, it describes the two places it serves, run together) with St Moritz. This is the Romansch-speaking area of the country, and I couldn’t help falling for the place names which look, as well as sound, so exotic to me: Zernez, Cinous-chel-Brail, S-chanf, La Punt Chamues-ch…

We were extraordinarily lucky with the weather and, as you might expect, spent as much time as possible riding the distinctive Rhaetian Railway trains and heading up the cable car rides to the highest viewpoints (we’re not quite at ‘peak fitness’ – ha!), or actually getting the walking boots on for lower-level escapades by local woods and rivers. As is my habit, I’ll put some photos up on the blog before long to share some of these amazing views with you.

In the meantime, however, a couple of cultural highlights cropped up along the way. I suppose I should’ve been alerted to this at the outset when I saw these names on the entry-phone board of our accommodation block … and there was a rather appealing poster up in our flat, too: 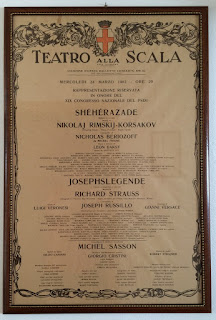 However, the first event did – almost literally – take place on our doorstep. On the information board at Zuoz station, we saw that a string quartet concert was taking place the Thursday after we arrived, in one of the churches in the heart of the village, Kirche San Luzi. Rather seduced by the programme (wouldn’t you be?), we popped into the tourist office and bought tickets straightaway.

The ‘Friends of San Luzi’ appear to be the society organising the concert and not – as I thought at first glance – the name of the quartet. In fact, the players – all professionals – seem to be assembled as a group especially for the concert: the occasion seems to be semi-regular, and the biographies of all but one of them included a reference to playing the Zuoz gig in the past. Not unlike some concerts we’d attended back home at London’s Middle Temple, then, the evening was bookended by most of the audience – who clearly knew each other – exchanging warm greetings (I suspect we were the only ‘incomers’!) as well as some hearty speechifying. 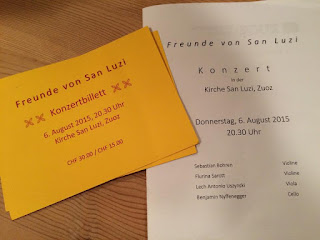 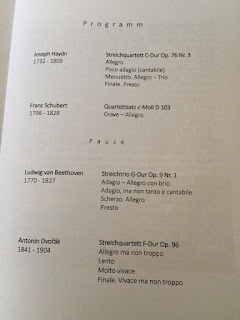 An extra-special, if slightly surreal, touch was when I first noticed the cellist, Benjamin Nyffenegger, arranging his music and preparing for the concert. I leant over to Mrs Specs and whispered, “I’ve seen him somewhere before.” I could feel my face scrunch up in concentration, racking my brains: cellist, small group, must be Wigmore Hall, mustn’t it? … but mostly I go to song recitals there … then I had it. It was the same chap who played cello in the Oliver Schnyder Trio, who I’d seen accompany the tenor Daniel Behle in his piano trio arrangement of ‘Winterreise’. Far more sensibly, Mrs Specs had simply turned to BN’s biography in the programme leaflet – and there was confirmation: Behle and the Hall both mentioned in his impressive round-up. How fantastic! – that we could choose to holiday in Zuoz at this exact time, then find ourselves listening to a (superb) player I had heard in my favourite London venue.

It’s clear to see – and hear – why the residents would want to hold chamber concerts in Kirche San Luzi. It’s a very intimate space with great acoustics – slightly favouring, I think, the viola and cello, which gave a very rich, grounded sound – but the fine overall balance allowed the ear to be as fast as the eye in discerning exactly which line of notes each member of the quartet was playing. 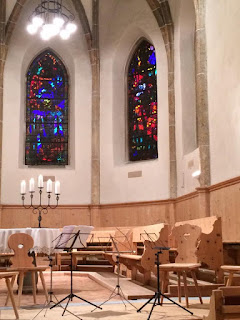 The slow movements in particular shone throughout: I had no idea that the Haydn piece provided the tune for one of my favourite school hymns, ‘Glorious things of thee are spoken’ … adding yet another flashback to the evening. (I’m not very nostalgic about my schooldays at all in general, but this felt quite poignant, and touched me to a greater extent than I might have expected – how like music to achieve this effect.)

It was intriguing, too, to find so much Beethoven ‘brio’ present in so early a composition … and those that know me well will realise what a thrill it was to hear some rare Schubert. Violinist Sebastian Bohren explained that he had to convince the others to play the Schubert fragment but by the time they’d rehearsed the piece, they’d fallen for it as well. Hard to believe, perhaps: but in a strange way reminiscent of the famous story where none of Schubert’s friends or contemporaries saw anything at first in ‘Winterreise’, either…

We found a second artistic oasis, tucked away in a side street amid the bustle of St Moritz: the Berry Museum. Peter Robert Berry was a Swiss artist, broadly contemporary with the Impressionists, who turned to painting full-time in his thirties after starting his working life as a doctor. (His grandson founded the museum, and is the latest in several generations of Berrys practising medicine in St Moritz.) 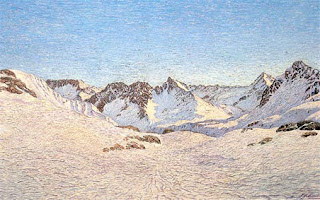 The key influences on Berry mentioned in the museum guide are, perhaps unsurprisingly, the Impressionists themselves (he spent some time studying in Paris) and Ferdinand Hodler, another renowned Alpine artist with strongly individualistic, stylised tendencies, who encouraged him. Berry would make the mountains his main focus, and the museum is brilliantly upfront about showing those paintings where he was clearly working through these influences – there’s a captivating Impressionist-style painting of sleigh tracks leading through the snow into the distance, for example, and pointillist treatments of, say, blazing skies.

But Berry’s own distinctive style soon emerges from these influences. While showing a clear love of depicting the landscape, he also seemed determined to include an element of unflinching reportage in his work, documenting for example the mail carriers riding through the snow (and, in one macabre sketch, perishing in an avalanche). Painter by day, musician by night, there’s a lovely touch of humour in one work showing his own possessions in transit towards his mountain outpost – including his piano, the artist perched cross-legged on top of it. 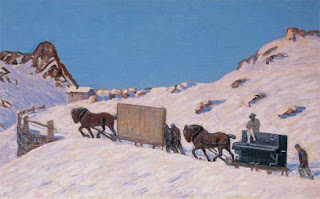 The only phrase I can think of (and I fully realise it’s something of a contradiction in terms) is ‘accurate impressionism’ – harnessing some of those techniques to make his particular artistic ‘truths’ more vivid to the viewer.

However, given my love of portraiture (and Berry seemed to have a Rembrandt streak that saw him produce several paintings of himself), I was irresistibly drawn to this image of his wife, Maria. 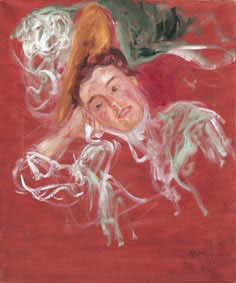 The description of the picture drew attention to the carefree approach of the artist, reflecting Maria’s lively character and obvious ease in front of the easel. It’s a beautifully different way of demonstrating away from the landscapes how Berry could always use an apparently casual approach to find an uncanny precision.