As I type, I'm still in a kind of euphoric recovery mode from 'A Poet's Love'. This was a tour de force by a brilliant gathering of singers and musicians to celebrate primarily the music of Schumann - but with some well-chosen Mendelssohn woven in to draw parallels and associations between two such apparently different composers.

The celebratory feel was amplified by the intensity of the event - taking possession of St John's Smith Square for just over a day, the collective performed five concerts: one on the Friday evening, with four making up an 'all-dayer' on the Saturday. And what a collective.

Pianist Anna Tilbrook and tenor James Gilchrist are widely renowned in their own right, of course, but I was most familiar with their ongoing song partnership - in particular their great recordings of the Schubert cycles. I was very pleased to pick up a flyer announcing a forthcoming Schumann recording - and, appropriately enough, the duo performed three major Schumann sequences: the two 'Liederkreis' sets (Op 24 and Op 39), and 'Dichterliebe', which, in English, gave the festival its title. 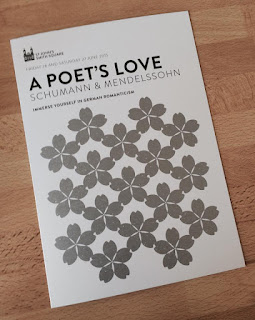 The duo seem to have that level of telepathy that makes voice and piano equal partners. JG handled the lightning switches of emotion between the often short, 'over-before-you-know-it' songs with ease. I was consciously impressed, over and over, at the masterful control of sound - he could sing, at times, so quietly yet clearly... yet all married to expansive gestures and facial expressions to play the mood changes out for us visually as well. AT - with only the occasional darting look in JG's direction - accompanied in perfect sync with the changes in dynamic, without compromising her own tone: a case in point is the 'outro' to 'Dichterliebe', an extended epilogue of real beauty and sensitivity, performed by AT at the top of her game after a full day's performance (I'll come back to this). JG even got to champion Mendelssohn as a songwriter, and the evidence of the ones they chose to perform on the Saturday morning, I'll definitely be investigating further.

In a stroke of whatever the recital equivalent is of 'dream casting', Carolyn Sampson joined the team for Saturday afternoon. This meant we could be treated to a gorgeous complete rendition of 'Myrthen', the set of songs Schumann assembled for wife-to-be Clara, for male and female voice. With words from a variety of poets, the sequence places the singers in several different personae, both humorous and heartfelt.

It's hard to believe that CS is still a 'new' art song performer, with barely a year of voice/piano recitals behind her. Suddenly opening up this new repertoire, and bringing all her gliding Baroque precision and operatic range of emotion to it - I think we can expect a future 'second career' of recordings and performances that are not just technically excellent but seasoned with her engaging approach and a sprinkling of unpredictable 'oomph'. (I wrote more about her 'debut album' with Joseph Middleton, 'Fleurs', here. You are strongly advised to get it.) It's certainly hard to imagine any other singers quite so adept at conveying a sense of joy and mischief - not just in the artist's obvious delight in singing the songs, but 'in character', too.

As a result, one of the undoubted highlights was the first song of the penultimate concert, Schumann's 'Tanzlied' - a 'dance song'. Although we knew this to be a duet, Anna T took the stage and opening bow alone. Cue our momentary confusion. After the first notes were struck, CS appeared and ran to the piano to start the duet, with JG's hopeless admirer trailing after her. The pair conducted the comic 'business' expertly, deploying some nifty moves while alternating verses. A deft programming touch also meant that CS and AT performed as a duo and we got to hear four Schumann selections from 'Fleurs' - and then, all too soon, CS was gone. 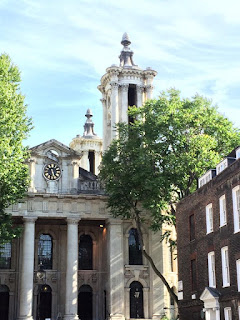 One of Anna Tilbrook's other roles is pianist in the group Ensemble Elata, and - in various permutations - they formed the core band for the event's chamber performances. We heard glorious performances of Mendelssohn's Piano Trio (Op 49) and Schumann's Piano Quintet (Op 44) rounded off the final concert in triumph.

But what particularly appealed, on a weekend where it was proving possible to almost feel drunk on the virtuosity, was the team spirit and invention on display. The uplifting finale to Friday's concert was Mendelssohn's Octet - composed when Felix was a mere teen - and the group's double bass player Alix Scott re-arranged one of the cello parts for her to perform on the larger instrument. As a result, we got an exuberant, still fast-moving version with this fantastic, driving 'bottom end'. Likewise, the excellent cellist Louisa Tuck (whose playing I know best from her folk double-life as a member of Kathryn Tickell's ace band, the Side!) rearranged Schumann's oboe romances so she could perform them in duo with Anna T.

The power of the festival was cumulative, so that by the time the final notes were ringing around the church it was like being full to the brim with beautiful music, played not only with skill but with love, too. I think it was clear to players and audience alike that we were all having a terrific time. As the performers all took the stage in various combinations and relationships, it felt like a classical 'supergroup' was being assembled before our eyes and ears, just for this single explosive collaboration. Amid all this, it is worth singling out Anna Tilbrook's contribution - across all five concerts (so essentially, a week's worth of gigs in two days), that included four song cycles, two sets of stand-alone lieder, and seven chamber performances - she played on everything (except the Octet). She displayed no lapse in stamina whatsoever and closed the extravaganza as sensitively and expressively as she had begun... In fact, her consistency and sympathetic underpin to all the chopping and changing around her was a highly effective point of continuity for the audience and it feels right to regard her as the glue that held the event together.

We belatedly realised that we had missed a similar Schubert event last year. But I hope 'A Poet's Love' will still be followed by many more festivals like this. It was superb value for money (you could get a 'season ticket' if you were planning to see all five concerts), a stunning venue - which we're now determined to support more often - and a chance to see some of the finest performers of this music push the standard concert format into something extraordinary.