Cause for celebration! This week sees the release of the first brand new Sieben recordings since the majestic 'Each Divine Spark' album, which saw the light of day in early 2014. Veteran perusers of the Specs blog may recognise the Sieben alias - or the man behind the mask, Matt Howden - as one of my very favourite musicians. A listen to the new material (and let's face it, all the old material as well) should explain why.

For the uninitiated: Matt H writes more or less all his songs for just his voice, violin and loop station. Revelling in the apparent restrictions of the set-up, he creates rhythm tracks by striking the side of the fiddle, or rubbing his stubble against it for a 'shaker' sound; he applies a certain range of effects to the violin to widen the tone; and he even bends and shapes his voice by singing into the violin's pick-up and running it through the circuitry. Watching this live is beyond impressive, as he literally 'plays' the violin on all sides, careering about the stage in constant motion, and (once seen, never forgotten) to psyche himself up or intensify the energy, he whirls his bow around in a blur, on his fingertip.

However, all of that would still only go so far if the songs themselves were not of such consistently high quality. If the tools of his trade suggest a man who likes a challenge, this is all the more evident in his writing. Often I try to sum this up by saying Matt never makes the same album twice - and each new project seems to be a reaction or response to the previous one. He's clearly on an artistic journey - but more like an orienteer, checking in at any number of disparate points within his field. He has made folkish concept albums with deeply researched and thought-through lyrics (examples include a full mystery-play narrative and a suite of songs adopting flower-names into a kind of new dialect), then simply turned those approaches on their heads with a series of sharper, at times sinister records, more inward-looking (sometimes ruthlessly so), pared-down, amping up the industrial elements and constantly shifting the balance between the earthen, wood-and-gut 'organic' noise of the fiddle with the metal and electricity at his feet.

'Each Divine Spark' was almost certainly Matt's crowning achievement to date, marrying the intensity of the music with a new sense of space in the production, walking a tightrope between mellow and menacing, intimate and intricate. So where does the new 'Lietuva' EP take him? The answer: further out, further forward. 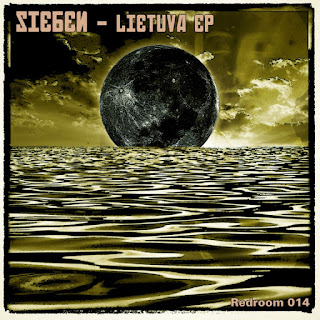 A digital-only release (at least for now), 'Lietuva' is almost its own new format. It has two major lead tracks, epic and commanding - in old money, they would probably be a 12" double-A-side. Supporting these are two shorter 'B-sides', which I'll come back to. So as EPs go, it's nourishing and substantial - at half an hour, as long as many an album.

'Lietuva' is the native word for Lithuania - home to the Menuo Juodaragis alternative music festival. Of the two main songs, 'Black Moon Rise Again' was written especially for performance at the festival and 'Užupis' inspired by the trip itself. Each lasting around 10 minutes, as Matt explains in his own blog, the new tracks are deliberately fashioned on a grand scale, aiming to draw the listener into a specific soundworld. The results are astoundingly successful.

Since 'Each Divine Spark', the Sieben sonic arsenal has increased. The trusty loop station has been updated and it's audibly clear that Matt now has access to a wider orchestral palette and range of effects. Some of the best qualities of that album remain: the 3D breadth of sound that seems to make the music move towards and around you, rather than just 'at' you; the increasingly confident vocals; an almost gypsy/jazz tone to some of the violin lines.

But here these characteristics are deployed to wholly different ends. The EP mirrors the tracks' creation, as 'Black Moon' unfolds as a kind of preparation ritual. Pacey, pounding, the track is unabashedly mantric and uses its repetition of the title to build and build into a near-frenzy. A hint of what's to come appears in a searing, cello-like hook that threatens to spiral out of control as the song nears its climax.

However, I'm currently minded to think that track 2, 'Užupis', could be the very best thing Matt has released to date. Užupis is a historically artistic/bohemian district of the Lithuanian capital, Vilnius, that declared itself a republic in 1997 (a similar enterprise of sorts to Copenhagen's Christiana). The track begins at a slower tempo than 'Black Moon' but it's no less deliberate - and with more room to breathe, there's more time to notice the intricate genius of the song's jigsaw construction.

The first hook has a kind of revolving, zig-zag melody over a steady pulse, as an opening verse sets the scene "on the other side of the river" (the English translation of the name Užupis, which is really separated from the capital by the river Vilnia). Each line finishes so that every other 'zig-zag' is still audible. Then the vocal retreats for the time being, and the instrumental elements of the track start to weave their spell. Newly-minted percussion sounds underline the world/ethnic feel of the violin until at last - in a real 'punch the air' moment - a vast bassline comes in. So cavernous it could almost be a Siebenised take on a doom riff, it lurches between notes in such a way that it mirrors - without getting in the way of - the original hook. Listening to the various elements of the track weave around each other, it reminded me of how some of the most arresting Sieben music isn't just about 'building up' the layers - getting louder or more insistent - but also building down or through, fleshing out. Abstract channels of strings fill the centre, vibrating then stabbing.

More vocals arrive, and the range and confidence I spoke of earlier is firmly in evidence. One chant, taken from the republic motto - 'Don't fight / Don't win / Don't surrender' - layers vocals sung on the same notes but (I think) an octave apart to give a real gravitas to the words (a bit like Peter Gabriel sometimes does, if searching for a reference point). And the matching of lyrics to tune is, well, matchless: details that really signify excellence, such as singing the actual name of the district across long, welcoming notes that merge into the backing, or writing the phrase "our unimportance" at a point in the melody where it can be half-spoken, half thrown away. 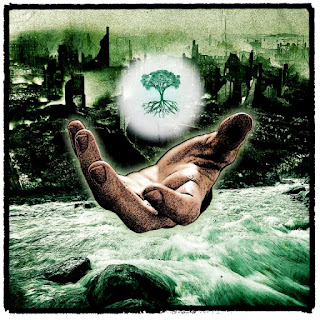 The track fizzes with ideas. The flag of Užupis is a circle in the palm of a hand - another phrase repeated in the lyrics - and a perfect image for the looping, cyclical nature of Sieben music. (This places 'Užupis' in a loose tradition of Howden tracks that reference his own writing - seek out 'Build You a Song', 'As They Should Sound', for example, or 'Song of Strings' from his brilliant Rasp collaboration with cellist Jo Quail.) For a brief spell near the end of the track, the different vocal tracks interlock so that Matt is singing a 'round' with himself.

The song - and EP overall, in fact - seem also to bring to life something about how this music is performed and received. Certainly there is a bedrock of love for non-mainstream, 'below-radar' artists (whether folk, metal or electronica) in mainland and possibly Eastern Europe in particular - one can only imagine how they might have reason to embrace art that flourishes underground. But Užupis's 'double independence' is a fitting metaphor for Matt's work (and others like him) as he operates apart not only from pop/rock normality but also, with this EP, conventional song formats. Like the city state, the only rules are no rules. Even the Black Moon, a term used by both astronomers and astrologers/occultists, resonates with the organic/electronic tension in the music.

Even while you're in recovery mode from 'Užupis', the EP goes on. Another apparent contradiction Matt willingly embraces is a 'back to the future' attitude to his earlier material. If he thinks an old song will work in his current style, he's unafraid to give it another airing - and veteran Sieben fans will recall how past songs sometimes reappear on later albums in new clothes. He even released a terrific retrospective (also titled 'As They Should Sound') with covers of his own tracks honed to razor-sharp bitesize renditions, a bit like opening a box of sieben-inch singles. So to round the package off, two ghosts from the past are run through the new kit and given a colossal sonic boost.

You can listen to the EP and buy direct from Matt on the Sieben Bandcamp page. You could use some of the other streaming/download services, but I recommend you take the Bandcamp route because for your paltry £4 (or more) you get high-quality downloads - which are an absolute must for music crafted to this level - and lots of amazing artwork into the (literal) bargain.

I am biased, but with very good reason. I can't recommend this highly enough. This is an artist whose music I've loved for years, and yet he never stops surprising or delighting me, or re-affirming how original and precious his music is. (And while you're at Bandcamp, you should check out and buy 'Each Divine Spark' as well. You'll see what I mean.)