The shark of the new: recent opera visits

In the last few months - largely thanks to a 'run' of bookings that seemed to land very close to each other - I've been going to operas considerably faster than I can write about them. But three productions I've been to in recent months keep shuffling around in my head as a kind of set, since they all brought something 'fresh' - for better or worse - to the experience: 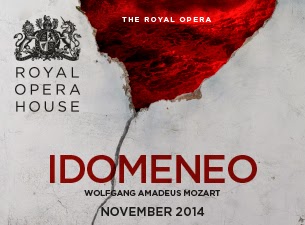 Idomeneo
I turned up for 'Idomeneo' excited and intrigued. After both 'Don Giovanni' and 'The Marriage of Figaro' at the Royal Opera House, I was keen to see a Mozart opera that seemed a bit more of a catch. The ROH castbooks (these are the free sheets that list the cast and production team without going into all the extra detail you get in the programmes) keep a statistical tally in the small print, and this was only the 22nd performance of 'Idomeneo' given there, ever. So - why does it lurk in the shadows in this way?

In addition, there was the undeniable lure of controversy! This was a new staging by Martin Kusej that polarised reaction in both print and social media - and the production team were booed by some of the audience when taking their bows on opening night. (For the avoidance of doubt, I should say that my attitude to booing is along 'zero tolerance' lines. Part of the contract when you buy a ticket for something artistic, is to experience the interpretation of those you are going to support. It does not give you the right to attempt to ruin the evening for the performers, or those around you.)

The action - well, normally - concerns Idomeneo, the King of Crete, promising Neptune that in return for reaching home, he will sacrifice the first person he sees when he gets there. Awkwardly, this turns out to be his son, Idamante. Ironically, Idamante has made a fair go of things in his dad's absence, bringing peace between the Cretans and Trojans by falling for the enemy princess, Ilia (who returns his feelings) and releasing their Trojan prisoners. Elettra (yes, Electra - that one) is also now resident at court, and remains hostile to the Trojans - unsurprising, given her own unrequited passion for Idamante. Idomeneo dithers, with increasingly catastrophic results - after he tries to send Idamante into exile (with a delighted Electra), a sea monster attacks the island, leading Idomeneo to first offer himself to Neptune, then Ilia does so, THEN Idamante - after killing the monster - also turns up, now happy to die. No doubt utterly fed up by this point, Neptune solves the crisis by having Idomeneo abdicate in favour of Idamante and Ilia. This suits everyone, of course, except Elettra.

This plot, however, is clearly not mad enough already. So Kusej places the action in some kind of modern, featureless police state. There are various hints at cultism and terrorist activities, with the 'sea monster' represented by a rubber shark held aloft as if some kind of idol or totem by entranced adherents. There are thugs wandering with guns through dry ice. Essentially, the story is presented through a kind of neo-Shakespearean "king in thrall to power" filter.

Because 'Idomeneo' clearly isn't really about this, there are inevitable problems. Crucially, they are mostly to do with the monster - since, in this version, there isn't one, it's hard to see what the actual threat is. Sure, it's probably a violent cult or mob (or something), but Idomeneo's in charge - isn't he? And once Idamante returns to the stage in triumph after killing the 'monster', the reading completely resists making sense.

Levering the opera around the 'idea' makes other areas clumsy. It's a bit embarrassing when the surtitle screen is used for captions that explain what's going on (or the programme includes a 'Production Synopsis'). Also to make CLEAR this is a POLITICAL SATIRE, the characters are dressed as ciphers, the 'baddies' (including Idomeneo and Elettra) in black, Ilia in sexy/virginal white dress, and Idamante in a crimson shirt, as though already bleeding in sacrifice.

For all this, I had a good time, though. I liked some of the production ideas: the royals trample over the bloodied rags of the people after the massacre; and the shifting, maze-like set felt appropriate for these textbook Greek myth characters, who are always trapped by fate and their own flaws. And I really liked what I heard: top honours must go, I think, to the darker characters who gave their trauma full vent: Matthew Polenzani (Idomeneo) and Marin Bystrom (Elettra), but Sophie Bevan made an alluring Ilia (this production loaded her interactions with Idomeneo with sexual tension) and Stanislas de Barbeyrac was extraordinarily affecting as Idomeneo's friend and adviser, Arbace. Countertenor Franco Fagioli - whose voice seemed slightly forced and traumatised at times - still seemed apt as someone who sounded like their voice might break; an intriguing vocal metaphor for a boy about to 'grow up' into kingship. 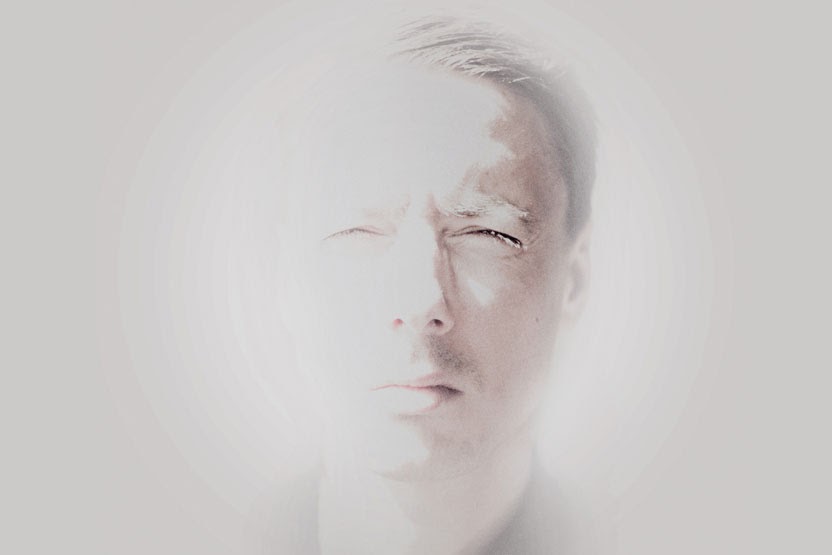 Glare
Meanwhile, the Linbury Studio Theatre at the ROH was showing a new work: Søren Nils Eichberg's 'Glare'. Short and sharp, this chamber opera was marketed as an SF thriller with hints of 'Blade Runner'. While I can see why that could be an attractive hook, in a way I felt the movie comparison was slightly unfair on the opera, making it sound less original than it actually is. The common feature is that both feature characters who may or may not be robotic, rather than real, but there the similarity ends.

There are four characters: Alex, Lea, Michael and Christina. Lea is Alex's current girlfriend; she seems perfect and strangely passive - to the point where Alex becomes bothered by it. Christina agitates trouble - she is hostile to Alex and tries to put Lea off him. Then, Michael, Alex's pal, spills the beans: Lea is an android, manufactured to provide Alex with the ideal girlfriend. With this supposed 'truth' out in the open, none of the characters follows up on it in quite the way you'd expect, leading to a nerve-jangling outcome.

I don't actually want to give away the ending, because this is so new and will surely be recorded, released and performed again. Because it's arguably constructed as a thriller first - a tight 75 minutes that feels like half that - and opera second, it really does matter whether or not you know what's coming.

Eichberg's score is superbly perfomed by the ensemble CHROMA, who bring kit drums and electronics into the mix so that you really are hearing a kind of combination sound, somewhere between a contemporary classical composition and an eerie John Carpenter soundtrack. The music is both inventive and functional, allowing the 'dialogue' to move along at a serious clip, and repetition is used superbly. As some characters echo not just words but also melodies first sung by another, is this because they are programmed to do so? Is Lea the only robot - or are any of them robots? Are any of them real? Is what we are seeing happening for the first time? So many questions I can't give you answers to...

The cast were completely up for it, too. Sky Ingram sang Lea with both power and detachment, a crystal clear voice with just a little feeling shaved off and hesistant response in its place to keep you guessing about her true nature, while Clare Presland was more twitchy and impulsive as Christina. Amar Muchhala skilfully conveyed Alex's unpredictability and gradual loss of grip in contrast to Ashley Riches's smooth, sinister Michael. Director Thaddeus Strassberger introduced some darkly humorous touches: the two blokes deliver their key exchange while playing - rather well, it would seem - a game of pool, and as a deft mirror to Lea's 'objectification' as his sexual conquest, Alex spent a significant length of time on stage in his blue Y-fronts. But mostly, the focus was on a slightly sickly neon-lit white performance area that could suggest at any time a spartan flat, hospital, club or laboratory, and as such, the characters moved and acted freely between them.

I would love this opera to come back sooner rather than later (or filmed - which might be a really good medium for it) - not just to enjoy the innovative score, but also to spot clues and just enjoy the ride all over again from a position of hindsight. Brilliant. 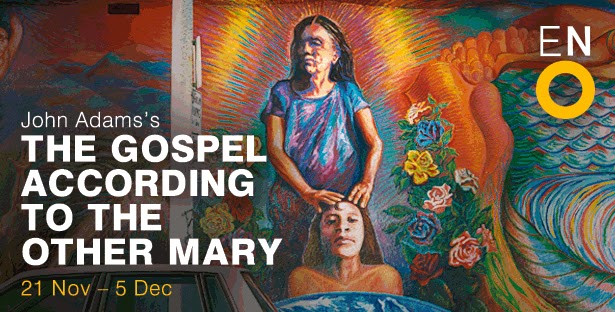 The Gospel According to the Other Mary
Finally, a premiere run at the Coliseum for Peter Sellars's staging of the new John Adams work 'The Gospel According to the Other Mary'. Released on CD earlier in the year and given as a kind of concert/oratorio, this is a kind of 'sequel' to the wonderful 'El Nino' (which also fused modern Latin American texts with Biblical verse, but dealt with the Nativity rather than the Passion). Set in an unspecified hinterland between the actual time of the Resurrection and a revolutionary nation in the present day, Martha runs a shelter for the dispossessed, complaining about her more dreamy and less practical sister, Mary Magdalene.

The piece has a satisfying diptych structure which highlights the direct parallel between the raising of Mary and Martha's brother, Lazarus, from the dead in the first half, and the death and resurrection of Jesus himself in the second. The return of Lazarus is one of the most jaw-dropping elements of staging, with a dancer - representing his life-spirit - crawling towards the body beneath what looks like translucent gauze, then lying alongside him, convulsing, until the 'main' Lazarus actor comes to life.

The dancing is an all-important element. Each character more or less has their own 'shadow' dancer, who expresses in movement what the soloists sing. The star turn was the unfussily named Banks, whose visually arresting and impeccable flex dancing (a breathtaking mix, it seemed to me, of street dance and mime) sent bolts of electricity through an occasionally static stage arrangement.

And the music is stunning. I'm an Adams fan already, and all the hallmarks are there - the fast, chiming string repeats - but I still wasn't prepared for the intensity and drive on display here. Everything sounds percussive and vibrant. Adams's bravura mix of traditional/ethnic instrumentation (now including a dulcimer-type instrument I now find is called a cimbalom) with classical orchestra - not to mention some magnificent choral writing that gives us close harmonies to Latin rhythms - is more or less perfect and no doubt a key influence on Sellars's decision to blend music and dance, past and present.

The soloists hold the whole thing together: Patricia Bardon acts up a storm as Mary, sounding note-perfect yet believably distressed; Russell Thomas a phenomenal Lazarus, only given voice once he returns and has holiness coursing through him. Another marvellous touch: Jesus is hardly represented as a single figure himself on stage - his words and actions are normally reported or enacted by a trio of countertenors: their number suggesting the three-in-one Trinity, their voices a group of angels.

I'm by nature an agnostic; but the effect of the evening on me was such that I rather felt music and expression can supply spirituality enough by themselves.