After looking at 'Auflösung' in the first of these columns, I'm staying with Schubert but this time, his treatment of a scene from the first part of Goethe's 'Faust', 'Gretchen at the Spinning-Wheel'. Since I don't suppose too many manly tenors, baritones or basses are in a rush to embody Gretchen (or at least, they're hiding well from YouTube if they are), the chaps get the day off this time round.

Reading various CD booklets and descriptions strewn across the net, one key fact stands out: this is regarded as Schubert's first proper song, dating from 1814, when he was 17. I won't dwell on that - we are talking about a genius - but I think it's worth bearing in mind as you give the song some attention how astonishingly mature its combination of sophistication and eroticism really is. When I was 17, my idea of combining eroticism and sophistication would be remembering to take the 'Marks & Spencer' label off a bunch of flowers before giving them to a date. 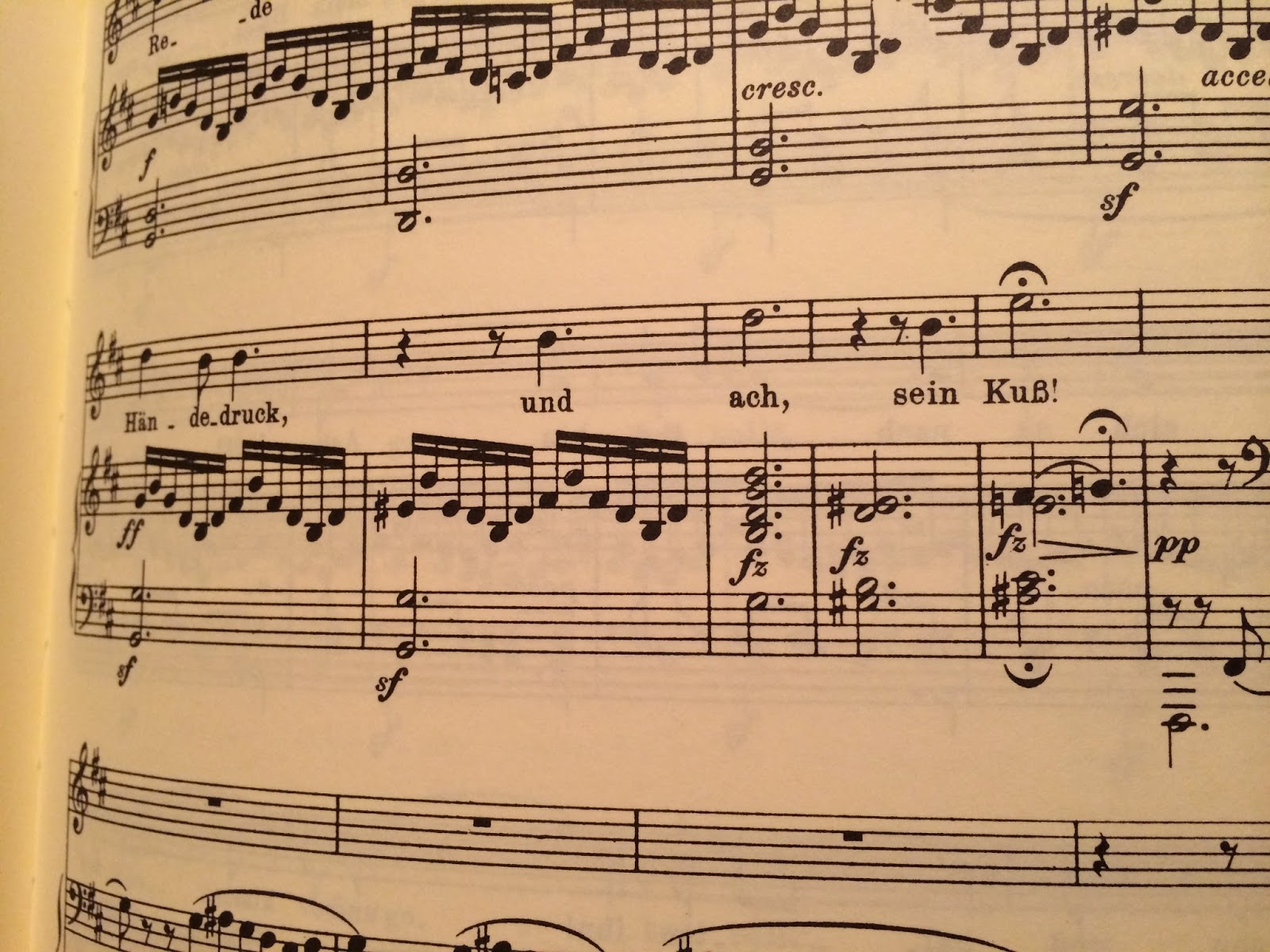 The other point you will find in every description of the song you read, is its representation of the spinning wheel. Gretchen is thinking about Faust as she operates the wheel, the circling pattern in the right hand gives the turning motion and the left hand provides the beat of the foot pedal. There are two key points in the song that show Gretchen's preoccupation and arousal. At the first, she decides in a moment of near self-loathing that her mind is in pieces, and the voice goes down in a kind of irritation ("zerstückt"); while at the second, the song's fever-pitch moment, she imagines - after first detailing his form, lips, eyes and touch - his kiss ("sein Kuß!"). You'll hear that the piano tends to speed up, slow down, or get louder and softer, with Gretchen's train of thought, and the 'kiss!' is the point where she's so exercised, she stops spinning. The song grinds to a halt, and the piano part gradually picks it up again as Gretchen regains her composure, and rhythm. The first verse ("My peace is gone ... I shall never rest again") returns several times as a kind of chorus, playing the still-gloomy nature of the text off against the 'pull yourself together' repetition of the musical figure.

Gripped by the song (like last time), I listened to a variety of performances, wondering how much room for interpretation there was given the strong narrative in the words. A great deal, as it turned out - and pleasingly, giving the accompanists as much room for manoeuvre as the singers.

Here is Kiri Te Kanawa, followed by Lucia Popp (one of my favourites!). I find these renditions interesting because both women seem to me to give performances of dignity and beauty, while the pianists have rather different takes: Richard Amner on the KTK version completely nails the regular motion of the wheel, while Irwin Gage accompanying LP suppresses the right hand a little in favour of the left to emphasis the staccato tap of the foot on the pedal. So while the overall effect of the KTK version is arguably 'poise', the LP has the edge of the accompaniment undercutting the beautiful melody line with the agitation provided by the machinery.

Another beautiful performance here from Barbara Bonney, but see what you think of the tempo? Can you spin this slowly? Gretchen's heart isn't in her work at all.


In Elly Ameling's version, we're back up to speed - her achievement here is to give an extraordinarily tender performance despite the song moving at quite a clip. I'd assume that's partly down to accompanist Jörg Demus using a hammerflügel - or fortepiano - where there is less sustain; so he powers through the runs and as the wheel turns, the notes cascade into each other.


This performance is from Jessye Norman, who with accompanist Phillip Moll, performs it at a lower pitch than the other versions. I'm a huge fan of Norman's 'Schubert Lieder' CD - it's a thrilling listen and has the feel of a 'greatest hits' about it - but her performance is utterly 'authoritative' and her "Kuß!" shattering. It gives me the impression that Gretchen is totally in control, and in response the piano seems hardly disturbed at all until she kicks the wheel across the room in a fury. Brilliant, but strangely maddening.


Here's Renee Fleming. Now a megastar, obviously, she is - I think - far more widely represented on disc in operatic roles/repertoire and songs with orchestra. I only discovered her lieder CD very recently. While I suspect she might be an acquired taste in this field, I've acquired it - I think here you can hear the role being 'acted'. In those two key moments I mentioned at the start, she spits out "zerstückt" with real venom, and her 'kiss' goes on for so long, she doesn't want it to end. Once the wheel is up and running again, she's still in recovery and draws a quick breath before continuing. Christoph Eschenbach is a fantastic foil, who gives an assured performance while still managing to give the impression the piano/wheel could de-rail at any minute. As almost a curio, I've added immediately afterwards a performance of the Reger orchestration of the song. RF is accompanied by Claudio Abbado conducting the Lucerne Festival Orchestra. It's a fascinating exercise, but the orchestra cannot really mimic the wheel. Even with all the tempo changes present and correct, everyone has to be attuned to each other and there's no sense of impending loss of control. RF has her work cut out to convey that alone. Spirited stuff.

While we're getting inside the inner workings of the song, here's another detour: Yuja Wang performing Liszt's arrangement of the song, where the solo piano carries the melody and accompaniment together. While exercises like this are partly academic - what makes it a great song is how the music so perfectly brings to life the lyric - I think it must be a fascinating transcription to play because there can be no separation between Gretchen's feelings and the music. They're all conjured up in the same person. So while this is instrumental, I'm not surprised that we seem to see a glimpse or two of YW mouthing the words to herself.


This, however, is where my whole post has been leading. Dorothea Röschmann's latest recital CD, 'Portraits', with Malcolm Martineau, has only been out a few weeks, but it already feels like one of the discs of the year. DR's voice has both the beauty and drama required, and she includes reverie as well as rapture - listen out for how they slow the song right down in the run-up to the kiss, as well as the usual pause after it. DR's ability to bring loud/soft dynamics that change very quickly make her vocal line feel like it's spinning like the wheel, taking some of the dramatic pressure off the piano.

In response, I genuinely think MM gives a truly inspired performance. This is some distance away from the forcefully rhythmic versions we started with, and while the regularity is there, he seems to shift and play with the emphasis of certain notes, so that the wheel's spin is actually uneven, a bit nervous and jittery. He is incredibly alive to 'gaps' in Röschmann's vocal, not just where she is silent but also where she holds a note without moving, and he darts in with small increases in volume to puncture Gretchen's hesitancy and pull her back to the wheel. I can't believe it's a coincidence that MM is so immersed in Debussy (at the piano for Hyperion's Debussy mélodie series - three superb volumes so far), with that gliding unpredictability surely informing his playing here. (Or vice versa? Both?) I hope this particular creative partnership brings this programme to us live, and gives us many more CDs in future. One for the ages.


Seamless link alert! - If I can, I want to talk about a particular Debussy mélodie in the next of these columns. Cliffhanger!
Posted by Adrian at 12:49