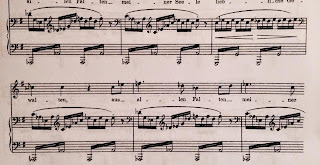 And now... *places fingertips together in manner of Bond villain* ... an experiment. As someone whose obsession with the voice in classical music has only intensified (first choral, then opera...), it's no surprise I'm now working my way through song. The worlds of opera and song clearly collide - and with many performers happy to sing both in character and in recital, it's a great opportunity for someone like me - cheerfully but almost inevitably rooted at the back of the opera house - to hear singers I admire at formidably close range. (Yet again, I realise how lucky I am to have venues like Wigmore Hall and Cadogan Hall more or less on the doorstep.)

Pop and rock is where my listening really started, of course, and I can't help but wonder if one of the attractions of classical song for me is sensing the composers (who, after all, were providing the 'popular' music of the time) trying to distil everything they wanted to say or achieve into a few minutes. The most powerful lied has to do exactly what a great 7" would do, hundreds of years later: grip the listener in the first few seconds, and take them to a different place as fast as a teleport. The famous story told about Schubert's 'Winterreise' feels so modern to me: the composer enthusiastically performed his freshly-written mood piece / song cycle (fast-forward: concept album) to his friends, to their utter bafflement. It just makes me think of an artist playing something 'in their new direction' to their inner circle or management, then hearing: "But there are no hits, Franz. Go away and write a single!"

The more songs I listen to, the more knock me for six and I found myself wanting to just share some of them, one at a time, in occasional posts. A chance to compare (and indulge in) a few versions and interpretations, YouTube etc permitting, and generally build up a very leisurely 'greatest hits'. Strictly speaking, 'lieder' are of course, the German variety of classical songs, but I wasn't going to let that get in the way of a daft pun. I will be sure to include French 'melodies' too (by the likes of Poulenc, Debussy and so on), British, Russian, Scandinavian....And I would *love* to receive suggestions for songs to include. If that's your inclination, don't be shy. I learn far more in cyberspace than I impart.

Today's song is by Schubert, who - I'm going to guess - is the undisputed master of lieder, in terms of maintaining such high quality over such a prolific output. (Hyperion Records have released a majestic complete set, which I really covet - so vast is its appearance, it looks possible to dwell in it for a short period. It runs to some 40 CDs.) The title, 'Auflösung', means 'Dissolution' - it's Schubert's setting of a short poem by Mayrhofer, and as song lyrics go, it's extraordinarily intense. The poet begins by banishing the light and sounds of spring ("Verbirg dich, Sonne") because, we find out, music is literally streaming ("Quillen") from his inner being. However, this could be an unsettling joyful acceptance of death: these are heavenly voices ("Himmlisch singen") bursting forth, and the world must end or vanish ("Geh' unter, Welt") leaving him to the sweet, unearthly choir ("die süßen, ätherischen Chöre").

Here from the 50s is the baritone Dietrich Fischer-Dieskau with pianist Gerald Moore: a partnership that managed to record most of Schubert song's for male voice.


The piano's task, it seems, is to simmer - the arpeggios bubble under the singer's declaration of intent, and in only the second line there's an irresistible crescendo on the rising notes (the text here is about a blissful glow). Schubert's astonishing music makes piano and voice such equal partners, with the main tune veering from high-pitched rapture to rumbling oblivion, exactly in line with the poet's mood swings. A winningly downbeat idea is to close the song not with the last line of the poem - that is, the choir - but with a repeat of the dismissal of the world.

While DFD doesn't stint on the drama, his performance has a rock solid gentility to it, almost caressing the cyclic, swaying notes for the sweet, heavenly voices until he takes control with the "Chöre" at the end. Listen out for a breathy dismissal of one of the "Geh' unter"s - a characterful touch for the protagonist's frustration.

It's interesting to hear the same pianist accompany Janet Baker on a slightly slower version. Baker seems to detect the beautiful apocalypse in the song, and luxuriates in its extremes (loud and soft as well as up and down)... Brace yourself at 0:38 for "laß mich allein" ("leave me alone").


Although the "Snakes alive! Is that possible?" prize should probably go to Jessye Norman (apologies - I could only find this on Spotify so you will need to log in yourself for this to work...)


The tenor Christoph Pregardien has championed the song at least twice. His older recording is with Andreas Staier on fortepiano. As the instrument has less sustain, they go much faster and the tumult Staier manages to generate as note piles upon note is impressive, urging Pregardien into a deliberately agitated, but superbly controlled rendition.


Re-recording it some years later, I believe, with pianist Michael Gees, CP seems to take a more reflective view of the song, allowing the piano to assert itself gradually more forcefully, until the singer really is taken over - the "Chöre" receding back into the mix as though he was stepping away from the microphone. Then his final dismissal of the world is closely recorded, not wracked, but resolute.


Speaking of 'wracked', I could only finish with one man: Ian Bostridge. I am completely in awe of what Bostridge does. When you think of 'rich' tenor voices like Pregardien's, or one of the real megastars, Jonas Kaufmann - that's not what Bostridge was put on the earth to do. His voice is an extraordinary instrument - as powerful and accurate as anyone but somehow narrow, angular, the emotion potentially forcing splits at the edges that never break. He can go from tender fragility one minute to howling anguish the next, and in performance uses his body knowingly, too: tall, slim and pale, he can seem almost bent double, grasping the piano for support at moments of extreme tension.

I remember seeing him in a Schumann recital, motioning with eyebrows only at a surprised Julius Drake to start playing. Bostridge was still seated. As we would find out, the song began with voice and piano simultaneously. Still a little doubtful, it seemed (although they must have rehearsed - surely), Drake touched the keys and Bostridge launched to his feet with the opening line. The note hit us from behind the piano lid like an ambush.

Here Drake - who I think is like a true telepath when accompanying singers - supports Bostridge in their studio recording of 'Auflösung'. It has a relatively measured pace, but nothing timid about the performance. Drake ups the bass on the piano part, with the audible crunch of the low notes at 1.22, for example, propelling the voice to dismiss the world - and no-one sings "Welt" like IB...

Again, sometime later, Bostridge and Drake revisited the song live at the Wigmore Hall. Again, this will only work if you have Spotify, but if you can hear this performance, I urge you to do so. Drake sets a frantic pace this time, and Bostridge is with him every step of the way. It's as if the two of them decided that at the end of 'Auflösung', the piano - streaming up and over the poet - drives the voice, rather than the other way round, and Bostridge rages against the coming of the light. Two minutes of this audio file is the track; the other minute is applause. No wonder.