In the past few weeks, I've managed to fit in quite a few opera visits and classical concerts - and when that happens, I find myself loading up the iPod with any kind of contrast: thrash metal, psychedelic folk, Blue Note jazz - you name it. I would love to say it's a deliberate attempt to keep my brain and ears open and wide to receive. But it would be more truthful to admit that it almost happens intuitively, and especially if work is a bit heavy or stressful - as noisy music is my nostalgia, and therefore part comfort zone, part tension outlet.

Why do I even describe this music as 'noisy'? God knows I've witnessed enough loud classical music to terrify the eardrums-- ah. There we have it: the drums. Pounding, shuffling, agitating, hammering. The simple pleasure of hearing someone thumping something in time still pushes all the same buttons it used to back in my indie-teenage days when I was trying to avoid 'dancing' into a barrier in Brixton Academy. Now that I'm more likely to be closing my eyes and donning headphones when I crank up the volume, it's easier to hear that keeping the band playing at more or less the same speed as each other is only part of what a good drummer is up to... Here are some tracks that reveal them for the elusive, maverick creatures they really are. 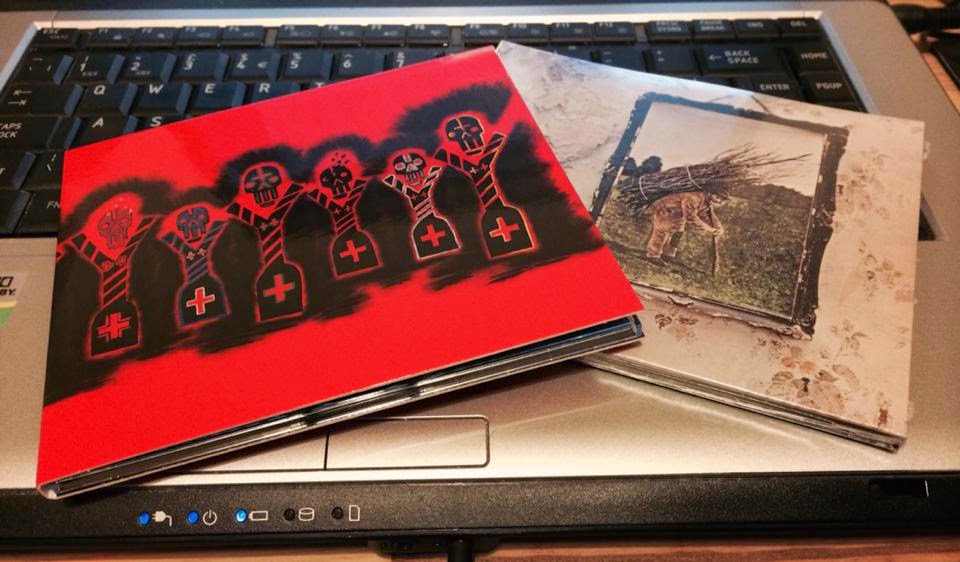 Led Zeppelin - 'When the Levee Breaks'

Seasoned rockers may wonder why I might bother including a song celebrated for one of the most iconic drum performances of all time. Well - if one person reading this hasn't heard it before, then it's worth it. The story goes that to achieve John Bonham's extraordinary sound (and volume) on this track, they moved the drums into the hallway of the house where they were recording, allowing him to blast and echo his way up several stories. What I find incredible is the way every part of the kit is equally upfront in the mix - yes, the snare is punishing, but so is the patient, relentless hi-hat, and the pounding bass drum. It makes the whole song lurch and totter, as if its own rhythm is beating it into submission, like the waves on the levee.


Can - 'Halleluwah'
The Bakerton Group - 'Life on Lars'

After the lumbering gait of 'Levee', here are two tracks that also feature drummers particularly adept at holding a metronomic groove in the midst of chaos. Jaki Liebezeit of Can seems to display superhuman stamina during 'Halleluwah', especially since he's not simply playing a basic rhythm but a kind of swinging military tattoo - the pace somehow seems both leisurely and propulsive because he's hitting at least two drums for every beat. Listen to the whole thing if you can, but from about 2 minutes in he takes centre stage and you can hear the most jaw-dropping runs and fills. The Bakerton Group are the instrumental alter-ego of US rock band Clutch. Their drummer Jean-Paul Gaster is capable of varying the colour of his playing enormously while maintaining an immense beat. You can hear this on 'Life on Lars' where the track begins with a stealthy tom-tom beat, then snares at 1:30 make him seem to spring forward in the mix and shift the song up a gear. Then - pow! - at 3:15 he changes his sound again, with a more laidback, loping beat including a casual roll, and this sends the rest of the band into overdrive. And he still isn't finished at 4:10, when he switches to a less 'fat', drier beat as the guitar and keyboard come forward. (Details people will love the way the initial tune is brought back right at the end, but married to the second main drum pattern.) Unfussy, but stoically magnificent.

Here are two drummers who play like they might be in the wrong body. Mastodon are a heavy metal band (so - warning - the vocals on this one are bellowed rather than sung) who love complex riffs and a good concept - this song is the opener on their album about Moby Dick, 'Leviathan'. But their trump card is drummer Brann Dailor, who plays rather like a metalhead with jazzer's limbs - in there, somewhere, is the actual beat, but amid a riot of smashing everything in sight, without losing control. From his skittery entrance across the kit to his insane fills between the chant in the chorus ("White! Whale! Holy! Grail!")... to a brilliant effect where, from 1:32 he suddenly lays out, as if to make you think "Well fair enough - that frantic riff would be impossible to play to" - and then, of course, from 1:47, he does. Conversely, Billy Higgins - often Lee Morgan's drummer of choice on his Blue Note albums, can sound like a rock star in a jazz player's body, always upping the 'funk' level compared to many of his peers, not afraid to drive things along with the snare drum. Although, the delicious jazz aspect is that you never know quite when he'll hit the snare drum...

While you're still recovering from Mastodon, I may as well keep my pedal to the metal and introduce Kylesa - who have two drummers, Carl McGinley and Eric Hernandez. Kylesa are certainly heavy, but as this track shows, they favour a kind of swirling psychedelic sound that buffets rather than bludgeons. They underline this effect by separating Carl and Eric in the stereo - ie one to the left, the other to the right - so you can experience that slight disorientation of their playing in time but not in strict unison with each other, or taking on different aspects of the rhythm pattern. It's a great effect that goes beyond a gimmick to really adding something unsettling to the sound. By contrast, Radiohead use two drummers live to play the most delicate beats of their career. The upbeat (Yes! Upbeat! You can even see Thom Yorke smile at the start of the video, unless it's some kind of cruel hoax) 'Staircase' is a perfect example of how, in seeking to emulate fallible machines and take glitch to the mainstream, Radiohead have decided that two humans clicking and tapping around each other provide best results.

Elvis Costello and the Attractions - 'Uncomplicated'

I've often wondered if being in the Attractions was extraordinarily taxing because the band members were all so strong - in particular, I think, drummer Pete Thomas, who was capable of performances that really gave the songs character. 'Uncomplicated', the full-on opener to a ruthlessly full-on album, has a drum pattern defying the song's title, with a pounding snare on the first three notes of each four in the bar. This is even odder to try and describe than it is to listen to. It makes the song sound pushy, front-loaded, so keen for aggro it might trip over itself - and as such makes it the perfect curtain-raiser for 'Blood and Chocolate'.


Talking Heads - 'Thank You for Sending Me an Angel' (Live)

'Stop Making Sense', quite probably the best concert film of all time, opens with the members of Talking Heads taking the stage one by one with each song. So David Byrne begins with a solo 'Psycho Killer' and Tina Weymouth on bass joins him for 'Heaven'. Then, drummer Chris Frantz is wheeled on, and - after a lending a quick ear to (presumably) a click track - launches into this. I find it amazing to this day, that such a manic drum part - let alone the sudden changes in volume (0:53) and showmanship with the cymbals (you'll particularly enjoy 1:53) - is his first onstage task of the evening. A joy to watch.

And what happens when we just have the drums, with no other distractions? Well, Cut Hands (a.k.a. William Bennett, formerly of extreme noise artists Whitehouse) is a slight cheat here, as Bennett - heavily influenced by both Haitian and African ritual drumming - samples a wide range of percussion from those cultures, and makes terrifying yet exhilarating new polyrhythmic collages. Live it's an unforgettable experience - while he projects visuals, Bennett is there alone with machinery (no-one is actually drumming) so there is nothing to stop you submitting to an almost trance-like state. A hypnosis of the body more than the mind. And finally, as if to bring this trip full circle, we arrive at contemporary classical, with this inspiringly disciplined band tackling 16 minutes' worth of Reich's epic suite for percussion only. What looks a bit like some relaxation at wrist level may give some clue to how they make this look so easy (watch the marvellously fluid movement of the chap on the right around the two-minute mark), but it's the precision that makes the piece soar.